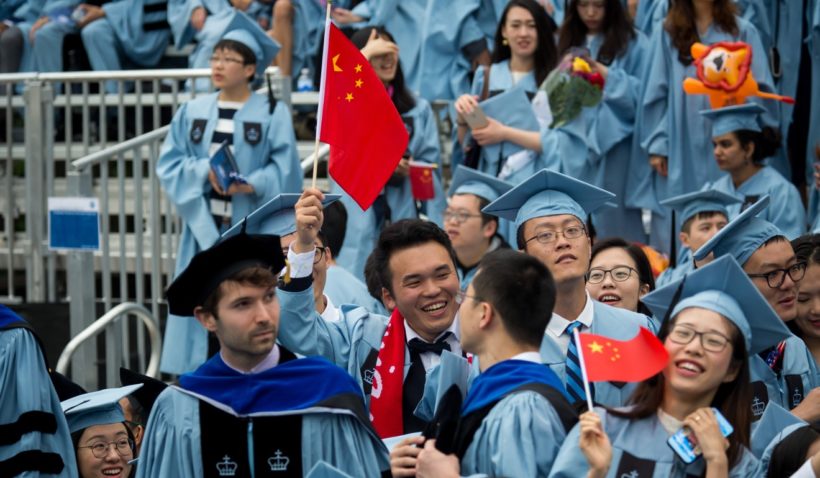 Chinese students pay well over $10 billion per year in tuition and other fees at US universities, per Deutsch Welle news.

(by Ellen Nakashima, The Washington Post) – Following an FBI investigation this summer, more than 1,000 researchers who had hidden their affiliation with the Chinese military fled the United States, the Justice Department said Wednesday.

The exodus came in the wake of the arrests of six Chinese researchers accused of lying on their visa applications about their ties to the Chinese communist People’s Liberation Army (PLA) and a warning to the Chinese ambassador that individuals who had not disclosed their true status needed to leave or face arrest.

The figure is startling…

In July, the Justice Department announced the indictments of six Chinese individuals accused of concealing their PLA ties. One tried to escape arrest by seeking refuge in the Chinese Consulate in San Francisco. (In addition, in September the State Department revoked the visas of more than 1,000 Chinese students linked to the Chinese military.)

One researcher was under orders to study the exact layout of a medical lab in order to replicate it in China, federal agents alleged. Another stole software code that his adviser at the University of Virginia had developed over two decades, the government alleged.

Those arrests, coupled with the July closure of the Chinese Consulate in Houston, which U.S. officials said served as a ­command-and-control node to direct spying operations, sent a signal to Beijing, officials said.

“They allowed us to message the Chinese government: If you’re going to send individuals here, you’ve got to do so honestly and you can’t hide their affiliation to the Chinese government and the Chinese military,” said Assistant Attorney General John Demers, who disclosed the 1,000-plus figure at the Aspen Cyber Summit on Wednesday.

The aim of the prosecutions, he said, “is not just to disrupt the individual but the broader activity” of Chinese theft of U.S. research.

The FBI and Justice Department knew that the scope of China’s effort to obtain U.S. technology was broad, but they were surprised when, in the wake of the consulate closure, so many people left the country, one U.S. official said.

“The breadth and depth of the exodus was not expected…,” said the official, speaking on the condition of anonymity because of the matter’s sensitivity.

James Mulvenon, an expert on Chinese espionage who is researching the extent of Chinese infiltration of U.S. research institutions, said the FBI since June has interviewed 50 to 60 researchers in 30 cities who are believed to be affiliated with the PLA.

After the Chinese government became aware of the FBI interest in these individuals, Chinese diplomats quickly warned Chinese researchers about the FBI probe and urged them to wipe clean their electronic devices and social media chats, he said.

Such actions led the FBI to suspect that the scale of the Chinese activity was larger than originally thought, officials said.

Then came the arrests, the consulate closure and the summoning of the Chinese ambassador. The ambassador, Cui Tiankai, was “stunned,” (by the Trump administration’s strong reaction to the spying) the official said.

The six arrested are still in custody and awaiting trial. …

Holden Triplett, a former FBI legal attache in Beijing, said active PLA membership isn’t the most important point. “These students or researchers are all vulnerable to exploitation by the [Chinese] government, PLA affiliation or not,’’ he said. “Whether or not they came here intending to spy, they can be put under pressure to do so.”

The Justice Department indictments are part of a two-year-old [China Initiative launched by the Trump administration] to disrupt and deter Chinese efforts to steal U.S. intellectual property and trade secrets.

Demers stressed that the U.S. government is not targeting people because of their ethnicity. “We are very much focused on behavior and never use ethnicity as a risk factor,” he said. Often prosecutions arise from individuals hiding their work for the Chinese government, he said. Such violations “go to the core of integrity at an academic institution,” he said. “It’s all about transparency.”

Published at washingtonpost .com on December 2, 2020. Reprinted here for educational purposes only. May not be reproduced on other websites without permission from The Washington Post.

1. a) list the who, what, where and when of the news item

2. What is concerning about the 1,000 Chinese nationals who left the U.S., despite the fact that some them might not currently be in the Communist government’s PLA (military)?

3. What do you learn about 2 of the 6 Chinese researchers working at American universities who were arrested by the feds for hiding their connection to China’s military?

4. Why did the federal government order the Chinese Consulate in Houston to close in July?

5. What surprised U.S. officials about the departure of the researchers following the arrest of six?

6. What did former FBI legal attache Holden Triplett emphasize about Chinese students studying or conducting research in the U.S.?

7. What do you think? Foreign students bring in a lot of money for American universities, but they also receive tax payer dollars. Should it be legal for students/researchers from dictatorial, repressive and/or communist countries to be admitted to important/sensitive research? Explain your answer.

Also, on Aug. 28, 2020, a Chinese national conducting research at the University of Virginia was arrested on federal charges that included an attempt to steal trade secrets and computer intrusion.