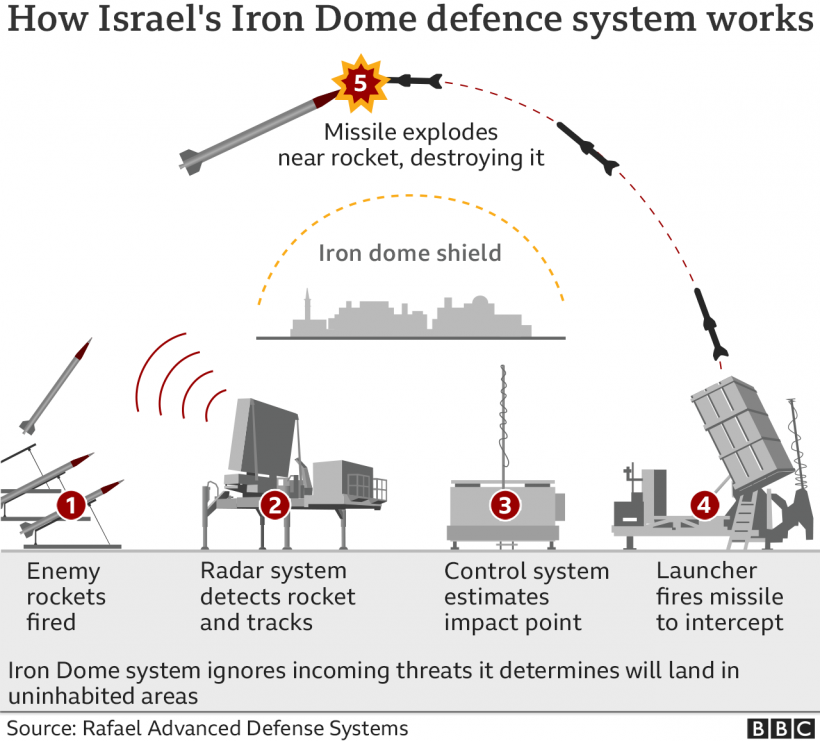 (BBC News) – More than 2,000 rockets have been fired towards Israel by Hamas and other Palestinian militant groups in five days.

But about 90% of the rockets have been intercepted by Israel’s flagship Iron Dome missile defense system, according to the Israeli military.

The Iron Dome was specially designed to protect against a range of incoming short-range threats.

The system was developed following the war Israel fought with Lebanon’s militant Hezbollah movement in 2006, when the terrorists launched thousands of rockets into Israel [targeting civilians] – causing huge damage, mass evacuations and dozens of civilian deaths.

After that Israel said a new missile defense shield would be developed.

Created by Israeli firms Rafael Advanced Defense Systems and Israel Aerospace Industries with some US support, the Iron Dome became operational in 2011.

Considered among the most advanced defense systems in the word, the Iron Dome uses radar to identify and destroy incoming threats before they can cause damage.

The all-weather system was specially designed to help combat shorter-range weapons like the rockets fired from Gaza.

The Iron Dome was expensive to develop but manufacturers say it is cost-effective because of technology it uses to differentiate between missiles likely to hit built-up areas and those that won’t. Static and mobile units only launch interceptor missiles to shoot-down anything interpreted as dangerous.

A decade since the Iron Dome became operational, Israel now has 10 batteries deployed across the country, each with three to four launchers that can fire 20 interceptor missiles.

“The number of Israelis killed and wounded would be far higher if it had not been for the Iron Dome system, which has been a life saver as it always is,” Israeli military spokesman Lt Col Jonathan Conricus said this week.

But some analysts say the intensity of recent barrages from Gaza suggests militant groups are attempting to overwhelm the Iron Dome – raising concerns about the system’s possible limitations.

[US Defense News reported on May 17:

Since May 10, approximately 3,000 rockets have been fired from the Gaza Strip at Israel. Iron Dome intercepted more than 1,000 of them, representing about 90 percent of those determined to pose a threat. Many rockets fall in open areas or don’t even leave the Gaza Strip due to malfunctions. Hamas UAVs (drones) have now been added to the rocket threat.

In total, Israel has intercepted six drones using multiple countermeasures since hostilities began between Israel and Hamas on May 10, the Israel Defense Forces said Monday. A senior Air Force officer described the interception as a significant advancement.

Tal Inbar, a UAV and aerospace expert as well as the former head of the Space Research Center at the Fisher Institute for Air and Space Strategic Studies, said drones are now an integral part of nonstate actors’ inventories, including those of (terrorist groups) Hamas and Hezbollah].

Published by BBC News on May 16, 2021. Reprinted here for educational purposes only. May not be reproduced on other websites without permission.

2. What caused Israel to develop the Iron Dome? When was it first used?

5. In his 2014 commentary under “Background,” Democratic Sen. Chuck Schumer notes that Hamas’ attacks on civilian areas in Israel are not morally equivalent to Israel’s defensive response. Hamas has been launching these attacks for years, but with the money and weapons supplied by Iran’s leaders, they have reached further into Israel. The Biden administration has not come out strongly in support of our ally Israel. They have not condemned Hamas for launching attacks trying to kill civilians, or pointed out the fact that Israel targets Hamas (terrorist) buildings in the Gaza Strip – and warns occupants before launching a strike in an attempt to prevent civilian casualties. Why do you think President Biden has taken the position of not defending Israel, the only democracy in the Middle East?

6. It is no surprise that the media misrepresents this latest conflict that was started by Hamas terrorists in Gaza – with no regard for the Palestinian civilians around them who may be harmed or killed. Read some tweets from IDF spokesman Avi Mayer for a different perspective.
Consider the information and videos under “Resources” below. How does this information differ from most news reports you have seen or videos or comments you generally see on social media? 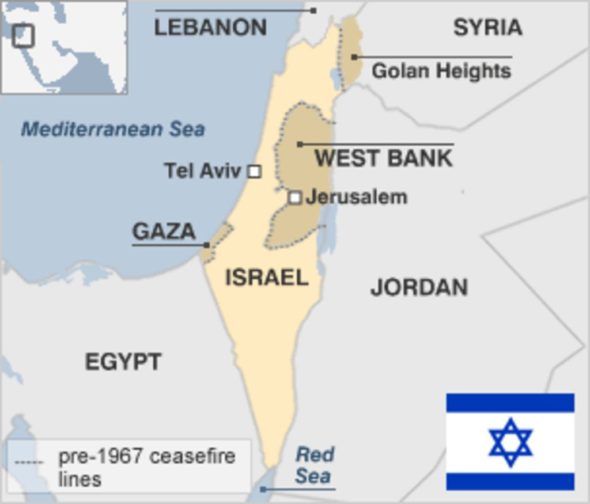 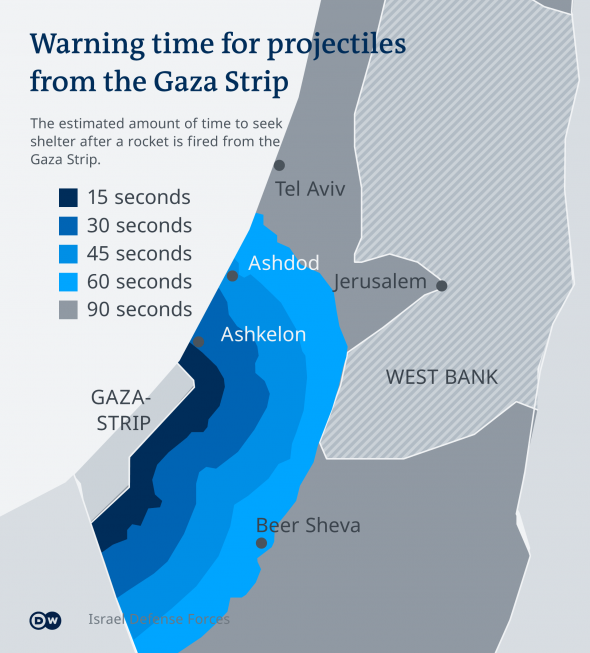 Senator Chuck Schumer, Democrat from NY, wrote in a commentary in 2014:

That notion that there is a moral equivalency between the defensive and targeted actions that the rule-of-law-based Israel is compelled to take, and the proactive and indiscriminate actions that hate-based organizations like Hamas takes, is completely unfair, unfounded and infuriating to supporters of Israel — with good reason.

Hamas, which has won elections with the support of the population of Gaza, is a terrorist group that remains bent on the destruction of Israel and its citizens. Without provocation, the Hamas governing authority flings rockets over the border, all over Israel, without regard to civilian lives or public safety. In fact, the terrorists frequently target civilians. Their intent is to terrorize and inflict as much pain as possible.

When Israel reacts, it does so defensively, to prevent rockets from hurting its people. It targets military capabilities or terrorist leaders. What other society gives advanced warnings to those shelling it, by dropping leaflets and making cellphone calls to warn the inhabitants of impending defensive strikes, to minimize the loss of innocent lives?

These proportional steps clearly make it harder to eliminate the terrorists and rockets, and Israel is almost unique in taking them.

Netanyahu has asked: What would the United States do if this kind of violence was happening in Houston, or Chicago, or New York? What would Germany do if it were happening to Frankfurt — or France, if Paris was under attack?

Would those countries just shrug their shoulders? Would they listen to admonitions of the world to let the rockets continue, and just try to talk? No, they’d defend their citizens as Israel is defending its citizens.

Hamas is a Palestinian Sunni Islamist terrorist organization that currently (since January 2006) forms the majority party of the Palestinian Authority…. Hamas is known outside the Palestinian territories for its suicide bombings and other attacks directed against Israeli civilians, as well as military and security forces targets. Hamas’ charter…calls for the destruction of the State of Israel and its replacement with a Palestinian Islamic state in the area that is now Israel, the West Bank, and the Gaza Strip……In January 2006, Hamas won a surprise victory in the Palestinian parliamentary elections….  Many [Palestinians] perceived the preceding Fatah government as corrupt and ineffective…  Since Hamas has taken control, the Palestinian territories have experienced a period of sharp internal conflicts, known as Fauda (anarchy), in which many Palestinians have been killed in…fighting [between Hamas supporters and Fatah supporters]. (from a 2011 wikipedia entry)

Watch a May 12 report on the fighting:

Watch a video “Why Isn’t There a Palestinian State?”