“Democracy cannot succeed unless those who express their choice are prepared to choose wisely. The real safeguard of democracy, therefore, is education.” – Franklin D. Roosevelt

After the primary elections, party delegates officially choose the nominees at the national conventions, which were held from July to August 2020.

Watch videos from some of the RNC and DNC convention speakers, then answer the following questions:

List 3 speakers from each convention and answer the following questions for each speaker: 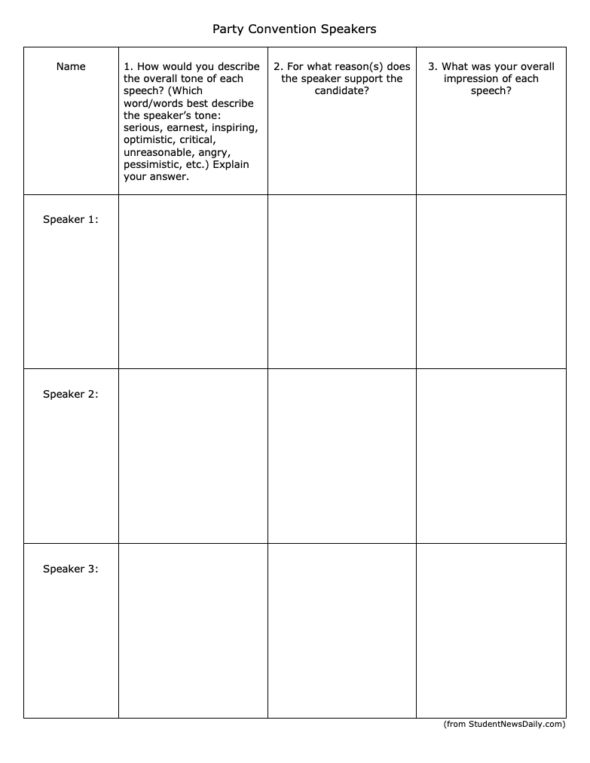 A National Platform is the official statement of a political party’s position on a wide variety of issues. Each issue included in the platform is a “plank.”

Party platforms and their planks are very important to the electoral process: They give the candidates a clear political position with which they can campaign. They give voters a sense of what the candidates believe in, the issues they think are important, and how – if elected – they will address them.

Both of the nation’s major political parties create platforms in advance of national elections so that voters have a clear view of the agenda the party will pursue if its members are elected to office. (A new Platform is adopted every four years by both the Democratic and Republican parties and is generally approved during the party’s national convention.)

View all current and previous party platforms at The American Presidency Project.

1. A preamble is an introductory and expressionary statement in a document that explains the document’s purpose and underlying philosophy. Read the Preamble to each party’s 2020 Platform. (Democratic Preamble, Republican Preamble) Based on the Preamble:

Worksheet: “Party Platform Comparison.”  How specific or detailed is each party on its positions regarding the issues? Complete the worksheet. Then answer a, b and c below.  View the pdf worksheet.

3.  Based on each Platform, what issues do you think are most important to each party? (Economic, Social, Foreign policy, National Security…) Explain your answer. 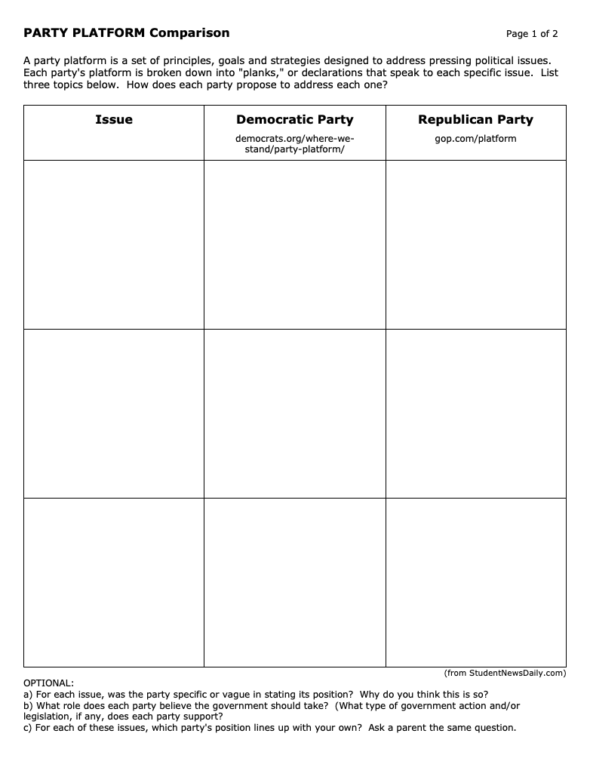 ***NOTE TO STUDENTS***
To really understand the candidates’ proposals/plans for how they will address the issues important to America today, you need to listen to what they say, as well as the policies they have implemented, not what the news media and political analysts say about them.  Take some time to watch at least one speech by each candidate on a specific issue such as the economy, violence in the cities, protests….

ABOUT THIRD PARTIES:  The U.S. has a two-party system, which distinguishes American government from most other democracies. Most Western democracies, particularly those in Europe, have multiparty elections and parliaments, but the American government traditionally has had a two-party system. Since the Civil War the two parties have been the Republican Party and the Democratic Party.

From time to time, third parties have gained traction with the electorate, most recently the Reform Party, led by Ross Perot, who won 19% of the popular vote in the 1992 presidential election.  Third parties can sometimes push the major parties to consider their position on a specific issue (generally when they believe the party is not taking a strong enough stand, or is taking a moderate position on the issue).  Few third-party candidates hold elected office at the state or national level.  There are dozens of “third parties” in the U.S. including the Constitution Party (conservative), the Green Party (liberal) and the Libertarian Party (in general socially liberal, fiscally conservative). Read more at wikipedia.

NOTE #1: For the 2020 election, the Libertarian Party has secured ballot access in just 35 states; the Green Party has qualified for the November ballot in only 22 states. (See ballotpedia for info.)

THE CANDIDATES ON THE ISSUES:

Before you are eligible to vote, decide that you will vote for a candidate based on his/her positions on the issues, and who you think will enact policies that are best for the country, not just you personally. (e.g. many college students say they will vote for the candidate who ensures they will not have huge student loan debt – would that be enough of a reason to elect a person president? Ask a parent.)

View the “Presidential Candidates on the Issues” PDF worksheet and answer the following questions:

Questions – Candidates on the Issues: 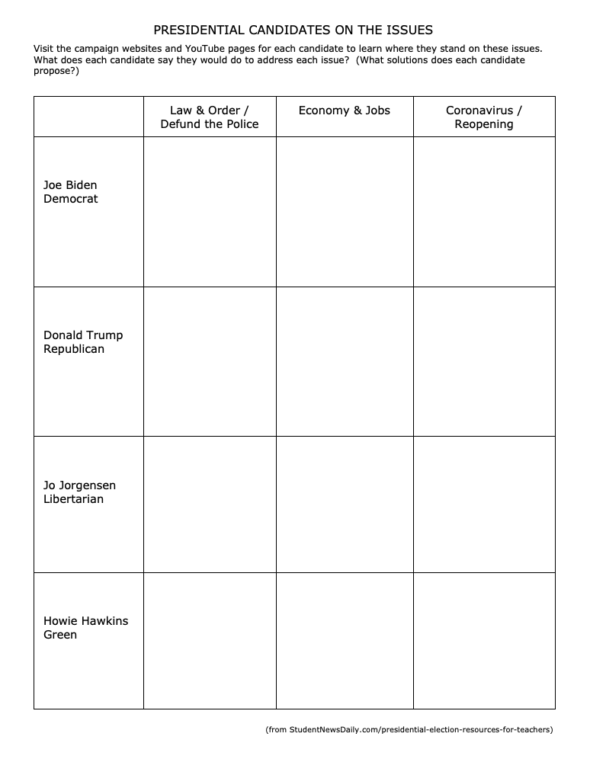 The central focus of a debate should be to provide voters with information they need to measure the suitability of the candidates for office. The Commission on Presidential Debates was established in 1987 by the Democratic and Republican Parties and has sponsored all presidential and vice presidential general election debates since 1988.

Why aren’t third party candidates participating in the debates? — The Green Party and Libertarian Party candidates are not invited to participate in the 2020 presidential debates because they did not meet the requirements necessary to qualify:  In 2000, the Commission on Presidential Debates (established in 1987 under the joint sponsorship of the Democratic and Republican parties) established a rule that for a candidate to be included in the national debates he or she must garner at least 15% support across five national polls. This rule has been controversial as it has effectively excluded U.S. parties other than the two major parties.

The Commission on Presidential Debates (CPD) will sponsor the debates this fall.

Watch each debate. Pay attention to the questions the moderator asks. View the “Presidential Debate” PDF worksheet for the questions below.

2. Which question do you think was the most important? Explain your choice.

3. For which question(s) did one or both candidates not give a direct answer, or not clearly answer the question?

4. A debate moderator’s role is to act as a neutral participant in a debate, to hold participants to time limits and to try to keep them from straying off the topic of the questions being raised in the debate. Do you think the moderator in this debate fulfilled this role? Explain your answer.

5. Do you think the questions chosen by the moderator helped viewers understand the candidates’ positions on foreign and domestic issues? Explain your answer.

6. Do you think the moderator’s questions were fair to each candidate? Explain your answer. 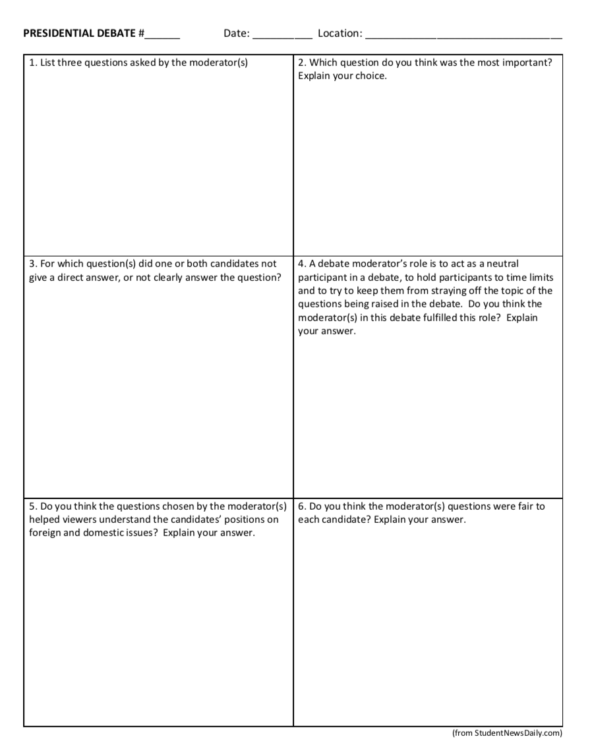 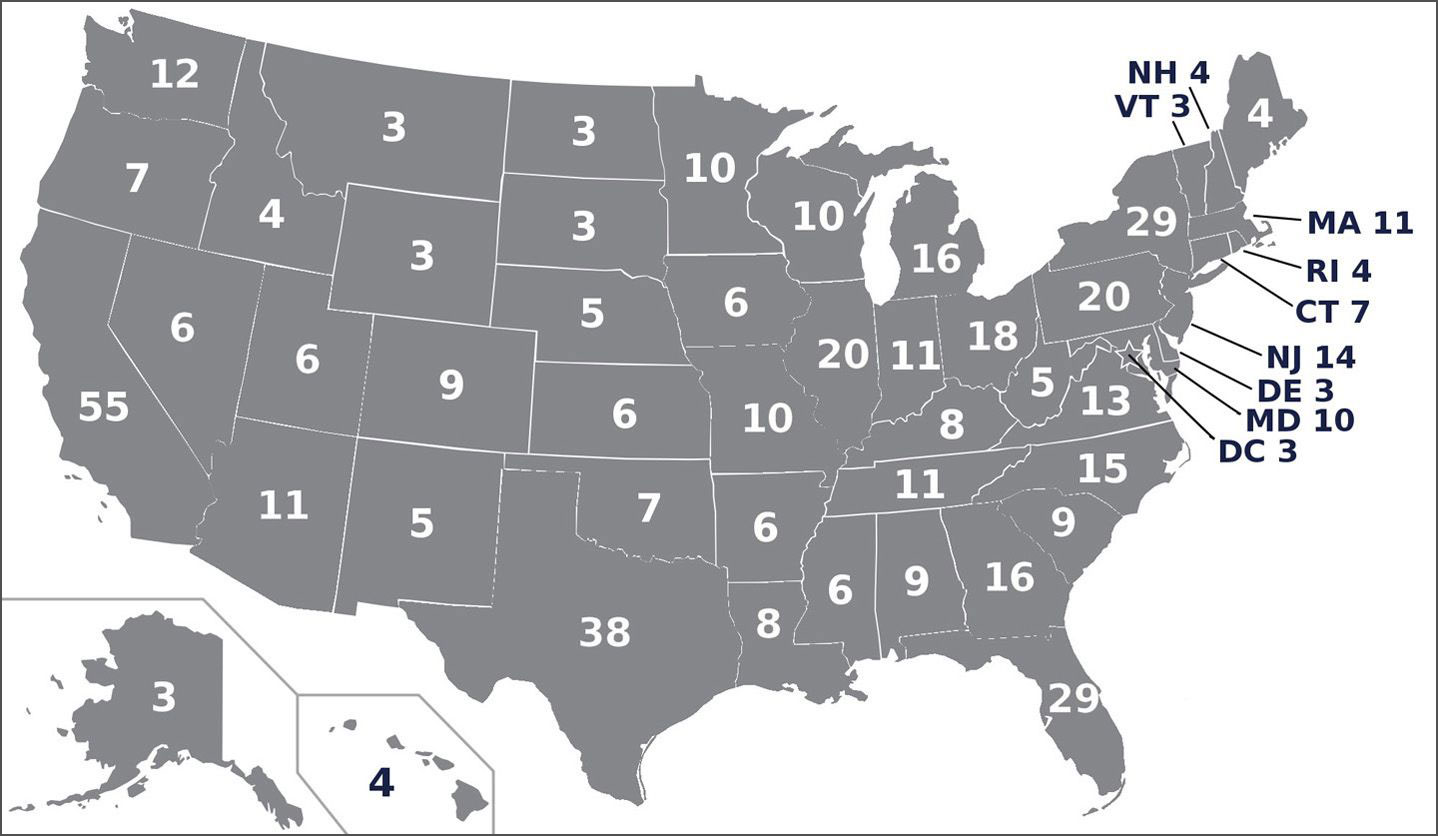 How many Presidential candidates lost the popular vote but won the election by winning the electoral college vote?

NOTE:  Samuel Tilden actually won more than half of the popular vote. The others only won a plurality [more votes than the other candidate, but not more than half the votes]. (from wikianswers)

A swing state, also referred to as a battleground state (or purple state because it is not majority Democratic “Blue State” or Republican “Red State”) is a state in which no single candidate or party has overwhelming support in securing that state’s electoral college votes. Such states are targets of both major political parties in presidential elections, since winning these states is the best opportunity for a party to gain electoral votes. Non-swing states are sometimes called safe states, because one candidate has strong enough support that he or she can safely assume that he or she will win the state’s votes. (from wikipedia)

1.  How many electoral votes does your state have?
2.  Why is your vote meaningful under the electoral college system?

Read a commentary by Walter Williams: The Electoral College Debate