A 2017 report on U.S. Attitudes Toward Socialism found that 44% of millennials would prefer to live in a socialist country.  However, when asked to define the term, two out of three got it wrong.

What do you know about socialism and capitalism?
What is Socialism? What is Capitalism? What’s the difference?
Socialism vs. Capitalism Chart (PDF)
Video #1 – What is socialism?
Video #2 – Socialism vs Capitalism
Video #3 – Venezuela’s Tragic Collapse
Video #4 – Does capitalism run on greed?
Commentaries
Cartoons
Quote

What do you know about socialism and capitalism?

Socialism: Economic and social equality through redistribution of wealth.
Capitalism: Create wealth through private ownership of property and businesses.

People associated with each system

Socialism is an economic and political system based on government or collective ownership of the means of production. Socialism emphasizes equality rather than achievement, and values workers by the amount of time they put in rather than by the amount of value they produce. It also makes individuals dependent on the state for everything from food to health care. Video #4 – Does capitalism run on greed?
In the 1979 video below, Milton Friedman is interviewed by Phil Donahue.
Milton Friedman was a professor of Economics at the University of Chicago for over 30 years.
He was a Nobel Prize Winner in Economics. 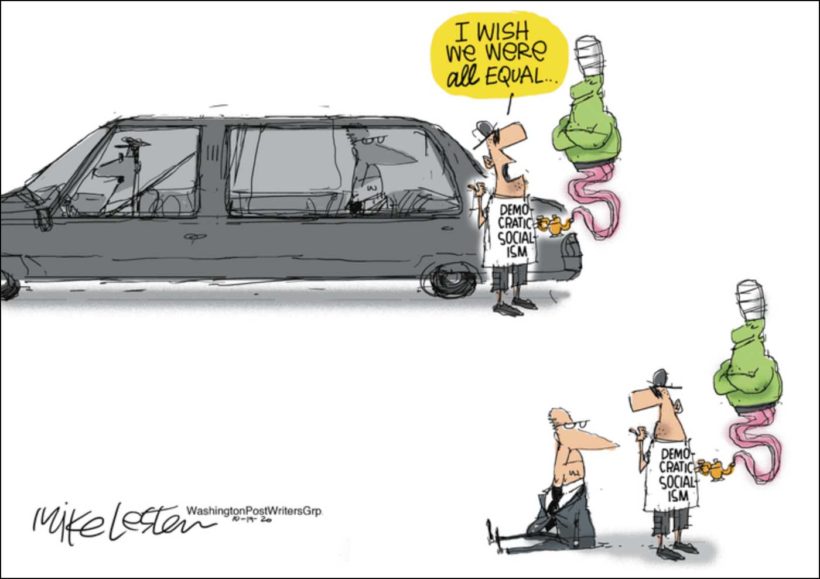 “The enduring lesson of the 20th century is that socialism is a failure, and free markets are a success.  But the politicians keep advocating just a little more socialism.”
– Milton Friedman, Nobel Prize Winner in Economics