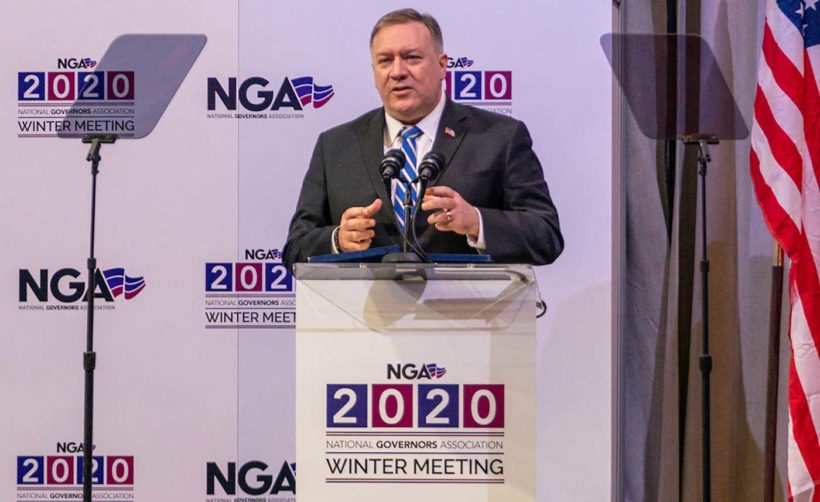 In a Feb. 10 speech before the National Governors Association, U.S. Secretary of State Mike Pompeo warns of China's influence campaigns

(by David Brunnstrom and and Brad Heath, Reuters) WASHINGTON — U.S. Secretary of State Mike Pompeo urged governors of U.S. states and territories on Saturday, Feb. 8 to adopt a “cautious mindset” when engaging in business with China, saying Beijing was seeking to use U.S. openness to undermine the United States.

In a speech to the National Governors Association in Washington Pompeo said China was pursuing a policy of exploiting U.S. freedoms to “gain advantage over us at the federal level, the state level and the local level.”

“When it comes to doing business, I’m asking you to adopt a cautious mindset. In the words of President Reagan, when you are approached for introduction or a connection to a deal, ‘trust but verify,’” he told the governors representing the 55 U.S. states and territories.

Pompeo, in his latest warning of what he sees as Beijing’s intentions, emphasized that competition with China was not just a federal issue.

“It’s happening in your states, with consequences for our foreign policy and for citizens that reside in your states … and affects our capacity to perform America’s vital national security functions,” he said.

Pompeo said the Chinese approach was organized and methodical, adding, “I’d be surprised if most of you in the audience have not been lobbied by the Chinese Communist Party directly.”

Beijing has denounced Pompeo’s comments targeting the ruling Communist Party as vicious attacks and said any attempts to smear China or obstruct its growth were doomed to fail.

Pompeo on Saturday said Chinese Communist Party “friendship” organizations had been established to expand Chinese influence in “Richmond; Minneapolis; Portland; Jupiter, Florida; and many other cities.” Chinese diplomats, he added, had sought to sway local elected officials on issues such as Taiwan, which Beijing sees as a renegade province.

He also referred to Chinese efforts to recruit scientists and professors at universities around the country to obtain technological know-how.

…Pompeo has been a particularly vocal critic of China on issues ranging from human rights to its push for dominance in next-generation telecommunications technology [through Chinese company Huawei].

Published by Reuters .com on February 8, 2020. Reprinted here for educational purposes only. May not be reproduced on other websites without permission from Thomson Reuters.

2. Why did the Secretary of State make the request to the governors?

3. What are Confucius Institutes?

4. What is the Thousand Talents Plan?

5. What does the communist government pressure Chinese students studying in the U.S. to do?

6. What did a think tank controlled by the Chinese government determine about all 50 U.S. state governors?

7. How important do you think it is for our state and local leaders, as well as our education officials, to be aware of, and not participate in, questionable dealings with the Chinese government? Explain your answer.

The People’s Republic of China (PRC)’s Confucius Institutes, which offer Chinese language classes in universities and other academic institutions around the world, have been the subject of controversy since appearing on U.S. campuses in 2005, particularly for their perceived effects on academic freedom and lack of transparency. They have attracted further attention in recent years as some Members of Congress and others have alleged that they may play a role in China’s efforts to influence public opinion abroad, recruit “influence agents” on U.S.campuses, and engage in cyber espionage and intellectual property theft.  Read a congressional report on Confucius Institutes at crsreports.congress.gov.

The U.S.’s top diplomat addressed the state governors at National Governors Association meeting in Washington, telling them that a think tank controlled by the Chinese government had assessed all 50 governors on their attitude toward China and given each one a label: “friendly, hard-line or ambiguous.”

“So here’s the lesson. The lesson is the competition with China is not just a federal issue,” US Secretary of State Mike Pompeo said.

“It’s happening in your states with consequences for our foreign policy, for the citizens who reside in your states and indeed for each of you,” Pompeo added.

The secretary also warned the leaders to be wary of Chinese investment and influence, especially through “diplomats, students and organizations,” according to the news source.

Pompeo relayed similar concerns during his recent five-nation tour of Europe and Central Asia. While he was in London, he reportedly called the Chinese Communist Party “the central threat of our times.”  (from a Feb. 9 report by Marty Johnson at MSN)

“Chinese Communist Party officials, too, are cultivating relationships with county school board members and local politicians—often through what are known as sister cities programs,” Pompeo said.

A number of major American cities, such as Chicago, Los Angeles, Houston, and Washington have such partnership programs with Chinese cities.

China has established Confucius Institutes at U.S. colleges, in addition to 519 “Confucius Classrooms” set up at U.S. schools ranging from kindergarten to 12th grade.

In recent months, following U.S. officials’ warnings that Confucius Institutes engage in academic censorship, many colleges have shut the Confucius Institutes. Schools in 25 states are in the process or already have halted these programs after conducting internal reviews, Pompeo said. [Confucius Institutes stated purpose is to provide  Chinese language training but evidence shows that the institutes’ learning materials distort contemporary Chinese history and omit humanitarian catastrophes caused by the Communists, such as the Great Leap Forward (1958-1961) and the Cultural Revolution (1966-1976) entirely, as well as engage in censorship. Chinese educators are barred from talking about universal values, freedom of speech, civil society, civil rights, the historical errors of China’s communist party and judicial independence — even when overseas].

Secretary Pompeo also pointed out other ways states are involved with China. He noted that the Florida Retirement System, one of the largest public pension funds in the United States, is a major investor of Hikvision, a Chinese manufacturer of surveillance equipment that supplies gear to Chinese authorities in Xinjiang for monitoring Muslim minorities.

In addition, California’s pension funds have invested in companies that supply China’s military.

Following the blacklist, a spokesperson with Florida Retirement System told Reuters that it was working with external money managers to meet all regulatory requirements. (from a Feb. 9 report at The Epoch Times)

Secretary Pompeo also spoke about China’s campaign to recruit U.S. scientists and academics to share vital secrets, in exchange for money through their “Thousand Talents Plan,” a campaign that has already targeted scientists and professors on campuses such as Virginia Tech and Harvard and triggered investigations by the Department of Justice (DOJ).

He also explained how Beijing pressures Chinese students in the U.S. to keep an eye on their fellow countrymen and report back to the government about their activities.

“China’s propaganda starts even earlier than college. China has targeted K-12 schools around the world,” he said. “Do you know that we have no ability to establish similar programs in China? We should have reciprocity in all things. Today they have free reign in our system and we’re completely shut out from theirs… Beijing knows that today’s kids are tomorrow’s leaders.”  (from a Feb. 8 report by Nick Givas at Fox News)

Watch an interview with Secretary of State Mike Pompeo: