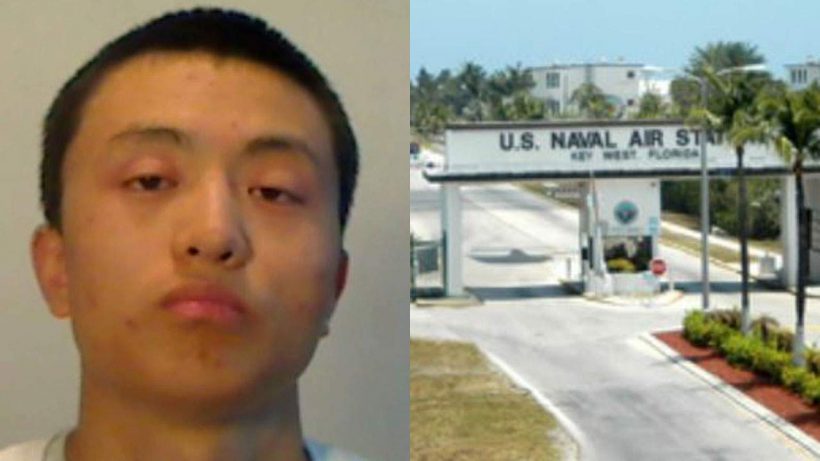 (by Cathy He, Epoch Times) – Two Chinese nationals have been arrested for illegally entering and taking photos at a U.S. Navy base in Florida—less than two weeks after a Chinese man was charged with the same offenses.

Wang Yuhao and Zhang Jielun, both Chinese citizens, were arrested Jan. 4 after they drove onto Naval Air Station Key West, Florida, and took pictures of the base, according to court records.

An FBI affidavit said Wang and Zhang drove to a guard station at an entrance to the Sigsbee Annex within the base, and were asked to provide military identification, which they couldn’t provide. They were then told they weren’t authorized to enter, but they proceeded anyway, the affidavit stated.

After 30 minutes in the restricted area, the pair were apprehended by Navy security personnel who found that they had taken photos of military structures on the base, court documents show. They also took videos with their cellphones.

Wang and Zhang, according to the documents, told FBI agents they read and understood English, and acknowledged that they were asked to make a U-turn when they couldn’t provide military identification, but continued driving.

The pair made their first court appearance on Jan. 6 and are due for a bail hearing on Jan. 10 at the District Court for the Southern District of Florida. Their attorneys and the southern district U.S. attorney’s office didn’t respond to requests by The Epoch Times for comment.

Their arrests come just weeks after another Chinese national, Liao Lyuyou, was arrested on Dec. 26 for illegally taking pictures at another annex of the same naval air station.

According to court records, witnesses observed Liao, 27, walking along the secure fence line of the military base. He walked around the perimeter fence and entered the facility from the rocks along the water. Despite witnesses’ “numerous warnings” against trespassing, Liao proceeded to enter and took multiple photos with his camera.

When U.S. military police came to question Liao a few minutes later, Liao explained in broken English that he was “trying to take photographs of the sunrise,” according to court documents. The officers, however, found photographs of the restricted Truman Annex area on his camera.

Liao is currently being held without bail. According to The Associated Press, his lawyer argued at a recent hearing that the 27-year-old was taking pictures while on vacation and that evidence of any crime is scant.

In another case, Zhao Qianli, then a 20-year-old from China’s Shanxi Province, was arrested in September 2018 for illegally taking photos of the same Navy base and surrounding military facilities.

According to a court document, Zhao walked directly toward the Joint Interagency Task Force South Antenna Field and took multiple photographs with his phone, as well as a camera. A search of the photos showed that Zhao also photographed the restricted warning signs.

Zhao told investigators at the time that he was “lost” and that he was a “dishwasher from New Jersey,” but later claimed he was a music student at a Chinese university during a December 2018 debriefing.

FBI officials also found a police shirt and belt buckle at the hotel where Zhao was staying that belonged to a Chinese government ministry, court records said. Zhao said he had obtained the items from his father, who wanted him to “have nice clothes” while in the United States.

Zhao was sentenced in February 2019 to a year in federal prison after pleading guilty to photographing defense installations. He will be deported after serving the sentence.

In December 2019, The New York Times reported that the U.S. government secretly expelled two Chinese embassy officials who allegedly drove onto a military base in Virginia.

The two were accompanied by their wives as they drove through the entry checkpoint of the base despite being denied permission, evading military personnel who pursued them.

Published at epochtimes .com. Reprinted here for educational purposes only. May not be reproduced on other websites without permission from the The Epoch Times.

2. a) Wang and Zhang were in a restricted area of Naval Air Station Key West for 30 minutes before being apprehended. What had they been doing?
b) What did the two tell the FBI agents who questioned them?
c) The two men are due for a bail hearing on Friday. Do you think they should be released on bail? Explain your answer.

3. Why was another Chinese citizen, Liao Lyuyou arrested on December 26 and being held without bail? Be specific.

4. What excuse did he give military police for what he was doing? What was he actually doing?

5. a) Why was Chinese national Zhao Quanli arrested at the same Navy Base in September 2018?
b) What contradicting statements did he make about why he was on base and who he was?
c) How did Zhao explain the Chinese police shirt and belt buckle he had in his possession?
d) What was the outcome of Zhao’s trial?

6. Two Chinese diplomats and their wives ignored guards at the gate at a Virginia military base and evaded military police who chased them. They were later expelled from the U.S. What do you think is going on with all of these incidents? All of these people knew exactly what they were doing. Are they testing the security at our military bases? And did they send the photos/videos of the restricted areas to their government before being apprehended each time? If so, how will the Communist regime use the photos/info about security? What do you think?

7. The Communist government of China under President Xi JinPing is establishing a giant surveillance network over the citizens of China. They know which Chinese citizens are traveling to the U.S. on student, business or travel visas.  They can travel on any type of visa but gather information (willingly or unwillingly) for the Communist regime. How should the U.S. respond to these concerning incidents? (Limit the number of visas given to Chinese nationals? Monitor those traveling in the U.S.? Do nothing: we shouldn’t limit travelers, students, etc. from any country from coming here…) Explain your answer.

8. Are you surprised to learn how easy it is to enter a military base when the guards say you are not authorized to do so? What procedures should be changed? (How can/should the military prevent potential spies (or anyone with nefarious motives or just without authorization) from entering our bases?)

In addition to the incidents above, the Epoch Times reported earlier that in September (2019), a naturalized U.S. citizen originally from China was charged with spying for the Chinese government.

Xuehua “Edward” Peng, who has a degree in engineering, came to the United States on a temporary business visa in 2001 and obtained U.S. citizenship in 2012. He had been working as a tour guide in the San Francisco Bay Area.

Prosecutors believed Peng was acting as a “courier” for China’s Ministry of State Security, the country’s top intelligence organization, and had been passing classified U.S. national security information through secure digital cards.

“This case illustrates the seriousness of Chinese espionage efforts and the determination of the United States to thwart them,” Assistant Attorney General for National Security John Demers said, after the charges were unsealed.

See a few previous articles on problems with China: