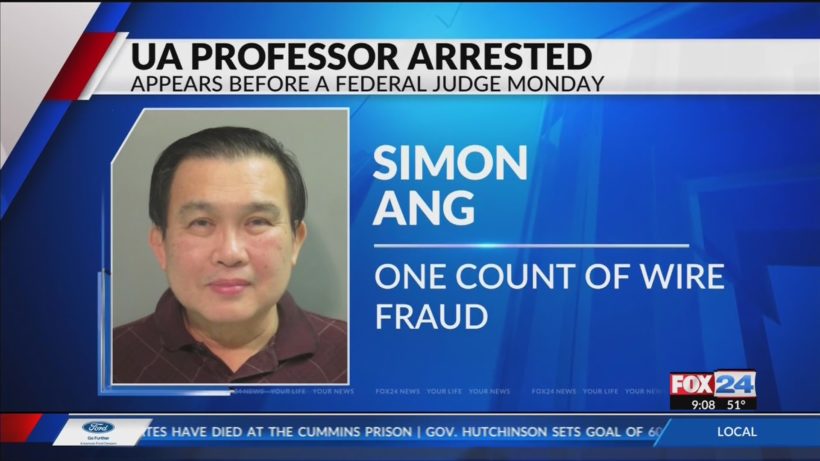 (Compiled from Adam Roberts, ABC local 40/29 News and Matt Farwell, NYTimes) — University of Arkansas Professor Simon Saw-Teong Ang was arrested Friday and is being held on a federal wire fraud charge, according to Charlie Robbins with the U.S. Attorney’s Office for the Western District of Arkansas.

The criminal complaint unsealed Monday accused Ang of failing to disclose “close ties” with China’s communist government and Chinese companies when he was supposed to do so in order to receive grant money from NASA.

“Ang was charged with one count of Wire Fraud. The complaint charges that Ang had close ties with the [communist government of China] and Chinese companies, and failed to disclose those ties when required to do so in order to receive grant money from NASA.

These materially false representations to NASA and the University of Arkansas resulted in numerous wires to be sent and received that facilitated Ang’s scheme to defraud.”

According to the complaint, since 2013 Ang applied for and received $5 million in federal grant money for his work at the University of Arkansas.

The U.S. Attorney’s Office said the investigation started when a university employee examined a hard drive in the library’s lost-and-found, trying to find out who owned the device and found emails from Ang.

Mr. Ang, 63, was the director of the University of Arkansas’s High Density Electronics Center, which was founded with Defense Department funds. The center made technology for use in the International Space Station, Mr. Ang said in an interview with an electrical engineering trade publication.

Mr. Ang’s work also involved power grid security research, said Todd Shields, a dean at Arkansas. He said the university was asked a few months ago to give the federal government information about faculty travel to China but did not know which agency made the request.

In an email last June to a researcher from Xidian University in China who planned to travel to the University of Arkansas, Mr. Ang warned the associate to stay silent on his involvement in the Chinese govenrment’s Thousand Talents program:

“Not many people here know I am one of them but if this leaks out, my job here will be in deep troubles,” he wrote. He ended the correspondence with another warning: “After you read this email, please delete for safety sake as any email can be retrieved.”

Another email from Ang to the Chinese researcher said:

“There are things that are becoming very difficult for me recently because of the political climate.” It continued, “I have to be very careful or else I may be out of my job from this university.”

Mr. Ang, who was born in Malaysia, earned his bachelor’s degree from the University of Arkansas and his doctorate from Southern Methodist University before working at Texas Instruments. He returned to his alma mater in 1988 to teach in the electrical engineering department.

The statutory maximum punishment Ang could face is 20 years in prison, according to Robbins.

The arrest in Arkansas comes after Harvard University scholar Charles Lieber was charged in January with setting up a lab in China in exchange for hundreds of thousands of dollars from the Chinese government and then denying knowledge of those payments to U.S. officials. Lieber has pleaded innocent.

Congressman Steve Womack released a statement regarding the arrest of University of Arkansas Professor Simon Saw-Teong Ang which stated:

“The charge against Simon Ang is serious, and I support both the DOJ’s and FBI’s efforts in this matter. This situation further demonstrates a known reality: China is actively working to target every aspect of American enterprise. From our supply chain to academia, they are employing all tools to try and subvert our institutions and steal proprietary information. The Chinese Communist Party – and anyone supporting their hostile and illegal efforts – must be held accountable.”

The FBI has been reaching out to colleges and universities across the country as it tries to stem the wholesale theft of technology and trade secrets by Chinese researchers at U.S. universities who are secretly working for the Chinese government.

Compiled from reports by Adam Roberts, ABC local 40/29 News and Matt Farwell, NYTimes. Reprinted here for educational purposes only. May not be reproduced on other websites without permission.

1. Who is Simon Saw-Teong Ang?

2. What charges were brought against Ang upon his arrest? (What did he do?) Be specific.

3. Why did the U.S. Attorney General’s office initially launch an investigation of Mr. Ang? Be specific.

6. One reader noted, “The Chinese communists have no creativity or ingenuity – communists never create anything themselves – they just steal intellectual property, ideas, designs, plans, formulas, medical research, etc. from the U.S. They are not capable of creating anything – only of large-scale theft.” What do you think of this assertion?

Here’s the full complaint against Ang.

The DOJ press release on Ang’s arrest states in part:  “Ang was charged with one count of Wire Fraud. The complaint charges that Ang had close ties with the communist government of China and Chinese companies, and failed to disclose those ties when required to do so in order to receive grant money from NASA. These materially false representations to NASA and the University of Arkansas resulted in numerous wires to be sent and received that facilitated Ang’s scheme to defraud.”