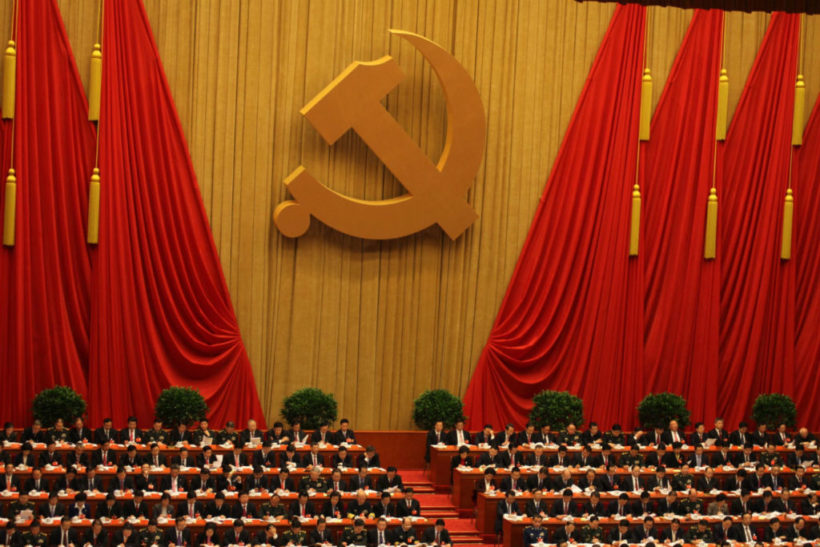 National Congress of the Communist Party of China

(Compiled from articles by Patricia Zengerle at Reuters, Max Greenwood at The Hill and Joel Gehrke, Washington Examiner)  – Three U.S. Republican lawmakers said on Wednesday they wanted China’s Confucius Institute “cultural centers” in the United States to register as foreign agents, and to require all U.S. universities to disclose major gifts from foreign sources.

Run by the communist Chinese government, the Confucius Institutes claim their purpose is to promote Chinese language and cultural education at more than 100 U.S. colleges and universities. They have been criticized as an attempt by Beijing to influence U.S. higher education.

Senators Marco Rubio and Tom Cotton, and Representative Joe Wilson introduced the “Foreign Influence Transparency Act,” which aims to crack down on foreign influence at U.S. academic institutions.  The bill would require the Institutes to register under the Foreign Agents Registration Act, or FARA.

The measure, which comes amid increasing concern from some U.S. officials about Chinese influence in U.S. education, also would require universities to disclose donations, contracts or in-kind gifts valued at $50,000 or more from any foreign source.

Many U.S. politicians have been pushing for the United States to take a harder line in its dealings with China, particularly President Trump and his fellow Republicans, but also many Democrats. U.S. officials believe that American academia is a broad target for Chinese spies.

Rubio took aim at the Confucius Institutes last month, sending a letter to five Florida schools urging them to end their agreements with the programs.

“Confucius Institutes are Chinese government-run programs that use the teaching of Chinese language and culture as a tool to expand the political influence of the PRC,” Rubio wrote at the time, using an acronym for China’s official name, the People’s Republic of China.

Rubio has been particularly focused on Confucius Institutes in recent months, urging Florida colleges and schools to end the programs. “These institutes are overseen by a branch of the Chinese Ministry of Education, and are instructed to only teach versions of Chinese history, culture or current events that are explicitly approved by the Chinese Government and Communist Party,” he warned in February.

“If we want there to be free speech and honest debate on our college campuses, then we need more transparency around other countries’ efforts to push their interests on U.S. soil,” Arkansas Sen. Tom Cotton, who joined Rubio in proposing the bill, said Wednesday. “Requiring organizations like Confucius Institutes to register their activities with the Justice Department and disclose where they get their money is necessary to alert college students to the malign influence of foreign propaganda.”

Such programs have played a part in advancing what the intelligence community has regarded as a policy of masking the Chinese government’s ambitions for international prominence. “The key theme is simple: China is not a threat. America should help China to peacefully emerge as a global power,” the Hudson Institute’s Michael Pillsbury wrote in…an analysis of Chinese foreign policy…

The lawmakers hope that, by requiring such entities to register as foreign agents, the appeal of those messages will be diminished.

“The goal of this legislation is to increase transparency between foreign governments, universities, and communities,” said Rep. Joe Wilson, R-S.C., who is offering a House version of Rubio and Cotton’s Foreign Influence Transparency Act. “The American people have the right to know if they are consuming propaganda that is being produced by a foreign government.”

The Confucius Institute headquarters in Beijing did not respond to a request for comment.

But Chinese foreign ministry spokeswoman Hua Chunying, a member of the ruling communist party, said they aimed to increase educational and cultural exchanges to help mutual understanding and boost friendship.

The real issue for those making “noise” about China was about how they viewed the world and China’s development, she told reporters.

“Hearing all this noise of late, sometimes makes me think of what Confucius said: ‘The gentleman is easy of mind, while the small man is always full of anxiety,’” Hua said.

“We hope these people can abandon these outmoded ideas and get their brains, along with their bodies, into the 21st century, and objectively and rationally view the trends of the time in global development and China’s development progress.”

Compiled from articles at Reuters, The Hill and Washington Examiner.

2. a) What would the Foreign Influence Transparency Act require the Confucius Institutes and universities to do?
b) What is the purpose of this bill?

3. What concern/criticism do U.S. officials have about the Chinese and U.S. education?

4. a) What are Confucius Institutes?
b) Where/how many are there in the U.S.?

5. a) What request and warning did Senator Rubio make to Florida colleges recently?
b) It sounds like the Chinese government gives sizable sums of money to operate their “cultural institutes” at U.S. colleges and universities. How do you think the universities should respond when given these warnings? Explain your answer.

6. How did Senator Cotton explain his support for the Foreign Influence Transparency Act?

7. The Confucius Institute in Beijing did not respond to a request for comment, but the ruling communist party’s foreign ministry spokeswoman did. Re-read her response to the U.S. lawmakers’ proposed legislation. What do you think of her condescending comments? Do they cause you to change your reaction to the lawmakers’ concerns? Explain your answer.

Read the text of the proposed “Foreign Influence Transparency Act.”

From a Feb. 13 report in the Washington Examiner:

Wray told Sen. Marco Rubio, R-Fla., that Chinese “collectors” of intelligence are targeting academic institutions throughout the country. Rubio emphasized fields such as science and mathematics as particular targets. Wray concurred, as administration officials agreed that China is pursuing a long-term strategy to eclipse the United States as a world power.

“The use of nontraditional collectors, especially in the academic setting — whether its professors, scientists, students — we see in almost every field office that the FBI has around the country,” Wray said during a Senate Intelligence Committee hearing. “It’s not just in major cities; it’s in small ones, as well; it’s across basically every discipline.”

The problem is exacerbated by the “naivete” of U.S. academics who don’t recognize the intelligence collectors among them.

“They’re exploiting the very open research-and-development environment that we have, which we all revere, but they’re taking advantage of it,” he said. “So, one of the things we’re trying to do is view the China threat as not just a whole-of-government threat but a whole-of-society threat on their end and I think it’s going to take a whole of-society response by us.”

Wray also confirmed that the FBI is monitoring Confucius Institutes…