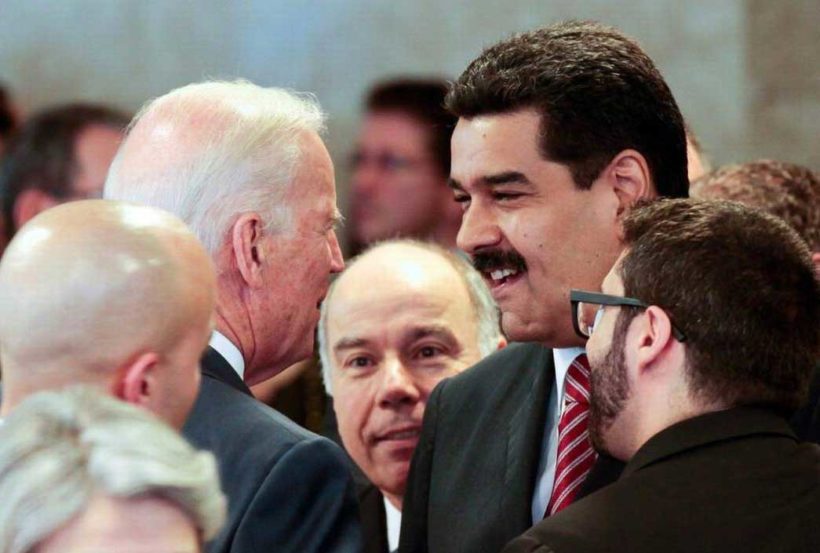 (by Reuters staff) CARACAS — Venezuela’s socialist president Nicolas Maduro said his government would work to establish dialogue with the United States under President-elect Joe Biden, after relations deteriorated under President Donald Trump [due to Maduro’s oppresion of his own citizens].

“I hope we can work to restart sincere and direct channels of decent dialogue between the future government of Joe Biden and the government over which I preside,” Maduro said in a state television address on Sunday, a day after the former U.S. Vice President [was declared the winner by the Associated Press and other media outlets].

Trump, a Republican, has used economic sanctions and diplomatic pressure to pressure the socialist Venezuelan leader to resign, accusing him of corruption, human rights violations, and rigging his 2018 re-election win.

Washington closed its Caracas embassy last year; Maduro cut off ties with the U.S. after the Trump administration recognized Juan Guaido, the speaker of the opposition-held National Assembly, as Venezuela’s rightful leader. Sixty other countries have also recognized Guaido, and the United States has also imposed sanctions on the OPEC nation’s oil industry.

(Despite the pressure, Maduro remains in power, backed by the Venezuelan military as well as key allies that also have authoritarian leaders/dictators: Cuba, Russia, China, Turkey and Iran.)

Biden advisers have said he would push for humanitarian relief in Venezuela and modify the sanctions framework, without dismantling it entirely.

The sanctions have proven popular among opposition supporters in Venezuela, as well as many voters of Venezuelan and Cuban descent in Florida, a battleground state that is closely fought between Democrats and Republicans. (Politico reported in October: An online study conducted in August for the Venezuelan news site El Diario found that 66 percent of Venezuelan voters in Florida intend to vote for Trump. Even 53 percent of Venezuelans who describe themselves as Democrats said they will vote for him. Venezuelans see the Democratic Party as an agent of socialism in the United States.)

Both Maduro and Guaido congratulated Biden on his victory on Saturday.

Reporting by Mayela Armas in Caracas; Editing by Luc Cohen and Rosalba O’Brien

Published at reuters .com on November 9, 2020. Reprinted here for educational purposes only. May not be reproduced on other websites without permission from Reuters.

2. For what reasons has the Trump administration imposed economic sanctions on Venezuela’s socialist dictator Nicholas Maduro?

3. a) Who is Juan Guaido?
b) What have other countries done regarding Guaido?

4. What will Joe Biden’s Venezuela policy be, should he become the president?

6. Politico reported on Oct. 20: An online study conducted in August for the Venezuelan news site El Diario found that 66 percent of Venezuelan voters in Florida intend to vote for Trump. Even 53 percent of Venezuelans who describe themselves as Democrats said they will vote for him.
a) Why do you think this is so when the media claims regularly that Trump is a racist, anti-immigration xenophobe?
b) What policy do you think Venezuelan-Americans would like to see the U.S. president take regarding President Maduro going forward? Explain your answer.

Venezuala is a socialist country.  For info, including several videos, visit our “Socialism vs. Capitalism” page.