GM latest US company to have assets seized in Venezuela 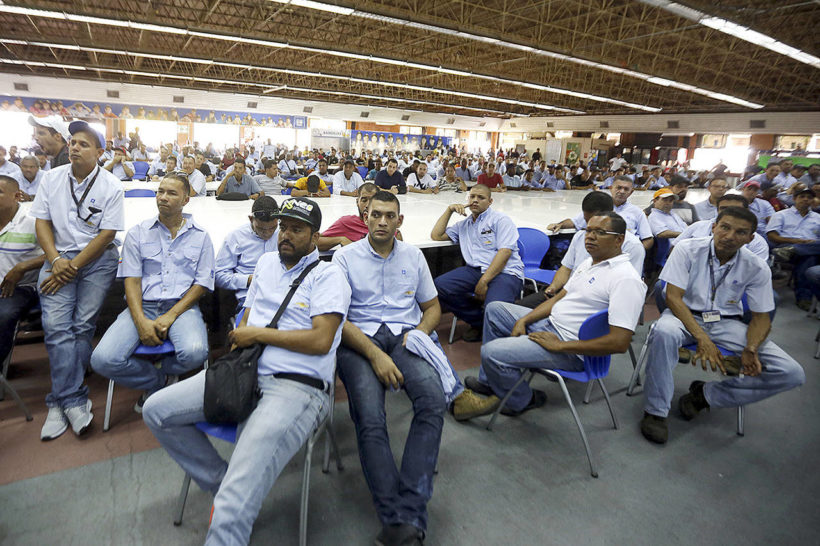 Workers of General Motors listen during a meeting with government officials at the company’s plant in Valencia, Venezuela, on Thursday, April 20. (AP Photo/Juan Carlos Hernandez)

(by Tom Krisher and Joshua Goodman in Caracas for Associated Press, at ABC News) – General Motors became the latest U.S. corporation to have a factory or other asset seized by the government of Venezuela, and the Detroit automaker faces an uphill battle to recover any damages.

GM said Thursday that its only factory in Venezuela was confiscated a day earlier, as anti-government protesters clashed with authorities in a country that is roiled by economic troubles. GM said assets such as vehicles were taken from the plant, causing it irreparable damage.

The seizure is the latest in a long string of government confiscations of factories and other assets that have been a [feature] of the 21st century socialist revolution in Venezuela started by the late Hugo Chavez two decades ago. Venezuela is currently fighting claims of illegal asset seizures at a World Bank-sponsored arbitration panel from more than 25 companies… .

In March, a World Bank arbitration panel determined that Venezuela did not have to pay $1.4 billion to Exxon Mobil Corp. for confiscating company assets during a wave of nationalizations (in Venezuela, the socialist government has been nationalizing — seizing control/ownership of — privately owned companies. Read more under “Background” below the questions).

Auto production in Venezuela has nearly ground to a halt amid the country’s economic collapse. The cash-strapped socialist government has choked off car companies’ access to dollars needed to import parts and repatriate profits. GM’s factory in the industrial city of Valencia has not produced a single car since 2015. Nationwide, car makers assembled just 2,849 cars last year, from a peak of 172,218 vehicles in 2007.

Despite Venezuela’s grim outlook, many car makers have decided to stay put and avoid the drastic step of shutting down operations to avoid losing market share in case the economy dramatically improves or a more business-friendly government takes power.

GM has about 2,700 workers in Venezuela, where it’s been the market leader for over 35 years. It also has 79 dealers that employ 3,900 people, and its parts suppliers make up more than half of Venezuela’s auto parts market, the company said.

The Venezuelan government had no comment about the GM factory.

In July of last year, the government took control of a factory belonging to Kimberly-Clark Corp. after the U.S. personal care giant said it was no longer possible to manufacture in the crisis-wracked nation due to a lack of materials. President Nicolas Maduro accused Kimberly-Clark of participating in an international plot to damage Venezuela’s economy.

If the government permits it, GM workers at the Valencia plant will get separation benefits “arising from the termination of employment relationships due to causes beyond the parties’ control,” the GM statement said.

Dealers will continue to service vehicles and provide parts, the company said.

… The company recently said that its South America region “remains challenged from macro-economic and political standpoints.” …

Reprinted here for educational purposes only. May not be reproduced on other websites without permission from ABC News. For the original article, visit ABCNews .com.

2. What did the socialist government take from GM’s only factory in Venezuela after seizing control of it this week?

3. a) How many companies have brought the Venezuelan government to the World Bank, accusing President Maduro of illegal asset seizures?
b) List the companies named in this article.

4. Why have many car makers decided to stay in Venezuela, despite the government confiscation of many privately owned companies assets/factories?

5. For what reasons has a lot of auto production halted in Venezuela?

6. What does the government say about its confiscation of the GM plant?

8. a) Watch the video under “Resources” below the questions. Why do you think Venezuelans aren’t buying cars?
b) People who support a socialist form of government believe it would make things fair and equal for everyone. How does this news report affect your view of this type of government system?

(In February 2015, Venezuelan President Nicolas Maduro ordered the takeover of a Venezuelan private supermarket chain by the government’s food agency.)

From an NBC News report:

Venezuela finds itself in a volatile state of economic and political crisis, partly because of a failure by the socialist government to deal with the collapse in global oil prices in 2014.

Triple-digit inflation and shortages of supplies mean long lines and bare shelves at stores across the country. Many people are suffering from a lack of food, water, medicine and other essentials.

On top of this, protests flared three weeks ago after the country’s Supreme Court tried to strip the opposition-controlled parliament of its powers — a move that would have given almost complete control to President Nicolas Maduro, according to his opponents.

The court’s decision was later reversed, but not before people took to the streets demanding elections they believe would remove their increasingly dictatorial government.

The AP reports: “Once among the richest and safest countries in Latin America [which practiced free-market economics], Venezuela is now falling apart. With a plunge in the price of oil and years of mismanagement [under the socialist government], the economy is unraveling. Food is scarce. Crime is rampant. Hospitals barely work. And people are fighting desperately just to survive from day to day.”