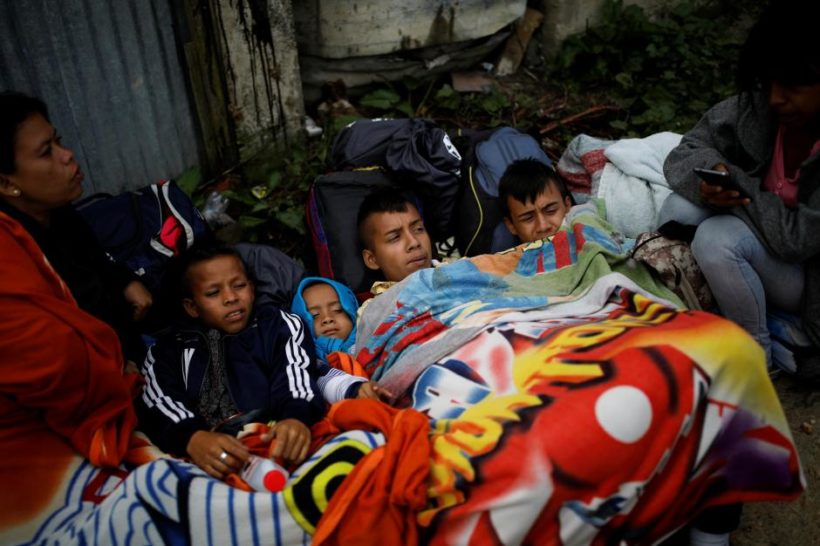 Undocumented Venezuelan migrants Maria Sanchez (L) and her son Jose (2nd L), rest on the floor next to (R-L) Johana Narvaez and her sons Johnjairo, Jhonaderson and Jhonaiker, while they protect themselves from the cold in an alley before continuing their journey in La Laguna, Colombia August 27, 2018. REUTERS/Carlos Garcia Rawlins

(by Alexandra Ulmer, Reuters) – VILLA DEL ROSARIO, Colombia – …For years, as conditions worsened in Venezuela’s ongoing economic meltdown, hundreds of thousands of Venezuelans – those who could afford to – fled by airplane and bus to other countries far and near, remaking their lives as legal immigrants.

In recent weeks, Reuters spoke with dozens of Venezuelan migrants traversing their country’s Western border to seek a better life in Colombia and beyond. Few had more than the equivalent of a handful of dollars with them.

“It was terrible, but I needed to cross,” said Dario Leal, 30, recounting his journey from the coastal state of Sucre, where he worked in a bakery that paid about $2 per month.

At the border, he paid smugglers nearly three times that to get across and then prepared, with about $3 left, to walk the 311 miles to Bogota, Colombia’s capital. The smugglers, in turn, paid a fee to Colombian crime gangs who allow them to operate, according to police, locals and smugglers themselves. Venezuelans carrying their belongings as they leave their country.

As many as 1.9 million Venezuelans have [left] since 2015, according to the United Nations. Combined with those who preceded them, a total of 2.6 million are believed to have left the oil-rich country. Ninety percent of recent departures, the U.N. says, remain in South America.

The exodus, one of the biggest mass migrations ever on the continent, is weighing on neighbors. Colombia, Ecuador and Peru, which once welcomed Venezuelan migrants, recently tightened entry requirements. Police now conduct raids to detain the undocumented.

In early October, Carlos Holmes Trujillo, Colombia’s foreign minister, said as many as four million Venezuelans could be in the country by 2021, costing national coffers as much as $9 billion. “The magnitude of this challenge,” he said, “our country has never seen.”

In Brazil, which also borders Venezuela, the government deployed troops and financing to manage the crush and treat sick, hungry and pregnant migrants. In Ecuador and Peru, workers say that Venezuelan labor lowers wages and that criminals are hiding among honest migrants.

“There are too many of them,” said Antonio Mamani, a clothing vendor in Peru, who recently watched police fill a bus with undocumented Venezuelans near Lima.

By migrating illegally, migrants expose themselves to criminal networks who control prostitution, drug trafficking and other rackets. In August, Colombian investigators discovered 23 undocumented Venezuelans forced into prostitution and living in basements in the colonial city of Cartagena.

While most migrants are avoiding such straits, no shortage of other hardship awaits – from homelessness, to unemployment, to the cold reception many get as they sleep in public squares, peddle sweets and throng already overburdened hospitals.

Still, most press on, many on foot.

Some join compatriots in Brazil and Colombia. Others, having spent what money they had, are walking vast regions, like Colombia’s cold Andean passes and sweltering tropical lowlands, in treks toward distant capitals, like Quito or Lima. …

Many of those crossing into Colombia pay “arrastradores,” or “draggers,” to smuggle them along hundreds of trails. Five of the smugglers, all young men, told Reuters business is booming.

“Venezuela will end up empty,” said Maikel, a 17-year-old Venezuelan smuggler, scratches across his face from traversing the bushy trails. Maikel, who declined to give his last name, said he lost count of how many migrants he has helped cross. Migrants pay as much as about $16 for the passage. Maikel said smugglers then pay gang operatives about $3 per migrant.

Despite tougher patrols along the porous, 2,200-km border, officials say it is impossible to secure outright. “It’s like trying to empty the ocean with a bucket,” said Mauricio Franco, a municipal official in charge of security in Cucuta, a nearby city.

And it’s not just a matter of rounding up undocumented travelers. Powerful criminal groups, long in control of contraband commerce across the border, are now getting their cut of human traffic. Javier Barrera, a colonel in charge of police in Cucuta, said the Gulf Clan and Los Rastrojos, notorious syndicates that operate nationwide, are both involved. …

Additional reporting by Mitra Taj in Lima, Anggy Polanco in Cucuta, Helen Murphy in Bogota and Alexandra Valencia in Quito.

Published at Reuters on October 15. Reprinted here for educational purposes only. May not be reproduced on other websites without permission from Reuters.

Pray for the people of Venezuela.

Venezuala is a socialist country.
For info, including several videos, visit our “Socialism vs. Capitalism” page.