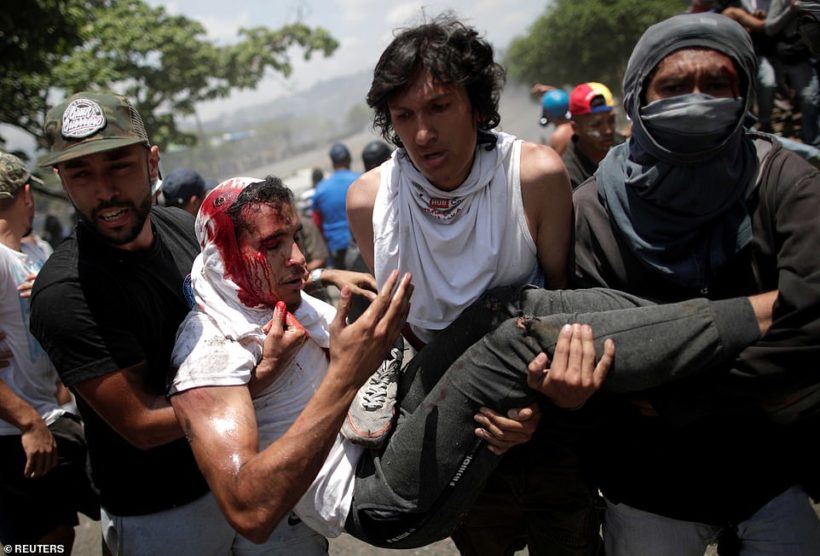 An opposition demonstrator bleeds from his head as he is carried by fellow protesters after being run over by a Venezuelan National Guard vehicle on a street near the Generalisimo Francisco de Miranda Airbase 'La Carlota' in Caracas.

NOTE: This is a developing story…

Those supporting the National Assembly leader took to the streets calling for the [departure] of Maduro. Military forces loyal to President Maduro have responded at times with violence.

One demonstrator, Victor Zabala, 25, told The Guardian he was struck multiple times by rubber bullets. He accused the National Guard of also using live fire on groups of protesters.

In one video, military vehicles appeared to mow down Guaido supporters, who responded by throwing objects.

CNN and BBC reported a number of cable companies in Venezuela received orders to stop airing the networks after they aired the graphic footage. The protester could be seen falling under the wheels and being run over by the GNB vehicle which then drove off and left the scene as demonstrators flocked around him.

Guaido called for non-violent protests to support what he called “Operation Liberty.” He made the announcement in a video in which he is flanked by Venezuelan military forces.

“People of Venezuela, the end of usurpation has arrived,” Guaido said in the video, taken at the La Carlota air base.

“At this moment, I am with main military units of our armed forces, starting the final phase of Operation Liberty. People of Venezuela, we will go to the streets with the armed forces to continue taking the streets until we consolidate the end of usurpation, which is already irreversible,” he continued, calling for nationwide demonstrations for Wednesday.

Leopoldo Lopez, a key Venezuelan opposition leader who’d been under house arrest, stood behind Guaido in the video. “We reject this coup-like movement that seeks to fill the country with violence. The pseudo political leaders that are heading the subversive movement have employed troops and police with war weapons in a street of the city to create terror,” he added.

“The U.S., with its meddling and coup-waging, looks to wreak violence and death in Venezuela, caring only about its interests and nothing about the human loses,” Morales said. “We must be united on our guard so that the coup-perpetrators never return to our region.”

“The United States stands with the People of Venezuela and their Freedom!” he tweeted.

U.S. national security adviser John Bolton called for a peaceful transfer of power and said it was “a very serious situation.”

“This is clearly not a coup,” he added because the United States [and most Latin American and Europen countries] view Guaido as the legitimate leader of Venezuela.   [Read a MiamiHerald opinion “Military rebellion in Venezuela can be called many things, but don’t call it a ‘coup attempt”]

[Also of note, U.S. Secretary of State Mike Pompeo told CNN on Tuesday that Maduro “had an airplane on the tarmac, he was ready to leave this morning as we understand and the Russians indicated he should stay.”  Moscow has increasingly thrown its weight behind Maduro in recent months.

“We think the situation remains incredibly fluid,” Pompeo told CNN. “We know there were senior leaders inside the Maduro government that were prepared to leave. They told us as much over the past few weeks and we’re convinced that the Venezuelan people are going to get their democracy back.”

Pompeo added that Maduro “was headed for Havana.”]

Published at UPI .com on April 30. Reprinted here for educational purposes only. May not be reproduced on other websites without permission from United Press International.

1. Find the answers to a) b) and c) under “Background” below the questions.
a) List the Latin American countries that have joined the U.S. in recognizing Venezuelan opposition leader Juan Guaido as interim president.
b) List the European and other countries that have also done so.
c) Which countries’ leaders back Venezuela’s socialist leader Nicholas Maduro?

2. What kind of protests did interim-President Juan Guaido call on Venezuelans to participate in?

3. Why did a number of cable companies in Venezuela receive orders to stop airing CNN and BBC after the protests began?

4. What did U.S. Secretary of State Mike Pompeo tell CNN Tuesday about Maduro?

5. Socialist president Maduro refers to Guaido’s calls for him to step down as a “coup.” In a report, CNN also referred to Guaido as leading a “coup.” Why is this a false accusation?

6. Watch the videos and check out some of the links under “Resources” below. Follow latest developments in current news reports.

Many European countries have followed the lead of the United States and recognized Venezuelan opposition leader Juan Guaido as Venezuela’s new leader.

“Maduro has not called presidential elections within eight-day limit we have set,” British Foreign Minister Jeremy Hunt said. “So U.K. alongside European allies now recognizes Guaido as interim constitutional president.” He added, “The oppression of the illegitimate, kleptocratic Maduro regime must end.”

“From today, we will spare no effort in helping all Venezuelans achieve freedom, prosperity, and harmony,” Spanish Prime Minister Pedro Sánchez said, urging both fair elections and humanitarian aid.

In Central and South America, the majority of nations, are backing Guaido. Brazil, Argentina, Chile, Peru, Colombia, Paraguay, Ecuador, Guatemala, Costa Rica, Honduras, and Panama have all announced their support for the interim leader. In addition, the newly elected left-leaning president of Mexico, [the leftist governments of] El Salvador, Nicaragua, Bolivia, and [the Communist government of] Cuba sided with Maduro.

Russia and China have, which have poured billions of dollars of investment and loans into Venezuela, are both supporting Maduro. The Maduro government is paying off both countries’ loans with oil. (from a Feb. 5 report) [Iran also back socialist President Maduro.]