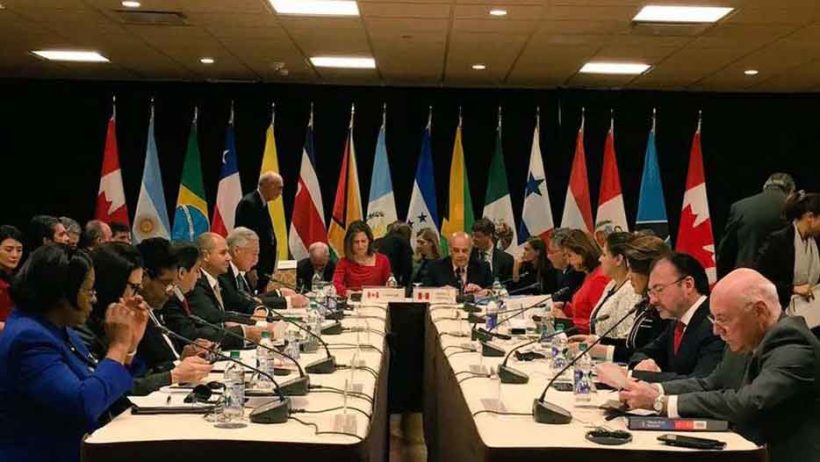 (by Renzo Pipoli, UPI) — Thirteen nations from the Group of Lima have agreed to deny entry to high-ranking officials of Venezuelan President Nicolas Maduro’s government.

The group was established in 2017 by Argentina, Brazil, Canada, Chile, Colombia, Costa Rica, Guatemala, Guyana, Honduras, Mexico, Panama, Paraguay, Peru and Saint Lucia. Representatives met in the Peruvian capital to discuss the political, economic and humanitarian crisis in Venezuela. Mexico did not subscribe the final resolution.

At the end of the Friday meeting, the Peruvian Foreign Ministry issued a joint resolution of the Group of Lima — in which Mexico was not included — asking Venezuelan President Nicolas Maduro to abstain from assuming the presidency, to transfer power to the National Assembly and to call for new elections.

At the time the original group was formed, Enrique Pena Nieto (who is center-right) was president of Mexico. President Andres Manuel Lopez Obrador (who is the first  leftist president to be elected in Mexico in decades) took office in December.

The group tried to coordinate a position ahead of Maduro’s Thursday (Jan. 10) swearing-in ceremony. Several nations, including the European Union and the United States, have not accepted the process that re-elected him, while some countries, including China and Russia, have.

The resolution said that Group of Lima countries would, depending on internal legislation, take action to prevent the entry of high-ranking Venezuelan officials to their territories and evaluate lists of Venezuelan people and organizations with which transactions will be banned.

During the Friday meeting, Maximiliano Reyes, the representative for newly elected President Lopez Obrador of Mexico,  said his government opposed interference and isolation, and intended to continue diplomatic relations with Venezuela.

The Venezuelan government last Tuesday rejected the “interference” of the Group of Lima as not recognizing the “legitimate authorities” of Venezuela. Maduro tweeted that the group was “a cartel.” He has repeatedly said the group is acting under pressure from the United States.

Maduro will assume a new term in a chaotic situation, not just marked by hyperinflation and sharply declining productivity, but also extreme violence and a massive exodus of Venezuelans.

Last year, Venezuela became Latin America’s most violent country, with more than 23,000 violent deaths — of which 7,523 occurred as citizens resisted [the Socialist government’s] authority, according to a tally of a non-government organization.

A chaotic economic situation [brought on by the Socialist government of Maduro] has created shortages of food and medicine and has contributed to the exodus of 3 million Venezuelans in recent years, according to the United Nations.

The country’s oil production [taken over/owned by the government], traditionally the main source of revenue with the world’s biggest crude reserves, has declined to historic lows.

Published at UPI .com on January 9. Reprinted here for educational purposes only. May not be reproduced on other websites without permission from United Press International.

1. For GROUP OF LIMA nations, answer the following:
a) List the countries in Central America and in South America alphabetically; include the population of each.
b) List member countries that make up the Group of Lima.
c) What is the Group of Lima? When/why was it established?

2. For GROUP OF LIMA nations:
a) list the who, what, where and when of the news item
b) What had the Group of Lima members met to discuss on Jan. 4?
c) What did the joint resolution call on Venezuelan President Nicolas Maduro to do? (list 3)
d) Why is Mexico the only member not to sign onto the group’s joint resolution on Venezuela?
e) What action will the Lima Group take if President Maduro ignores their request?
f) What is the population of Venezuela? How many Venezuelans have left the country due to crisis brought on by President Maduro’s socialist policies?

g) The reporters do not mention socialism anywhere in this news article. We have added the term in [brackets] in the final paragraphs of the article.

If a person who didn’t know anything about Venezuela read this article, they would not know years of socialist policies brought about this large-scale humanitarian crisis in a country that was once wealthy.

A recent Gallup poll shows that 51 percent of American young people have a positive view of socialism, slightly more than those who have a positive view of capitalism. David Boaz writes at CATO: “That’s frightening. The record of socialist countries, from the Soviet Union and Mao Zedong’s China to today’s Venezuela, is horrific: little or no economic growth, hunger, authoritarian government, people risking their lives to flee.”

Do you think inaccurate reporting contributes to the favorable view of Socialism? Explain your answer.

h) What responsibility do you think reporters have to give readers an accurate picture of any news story?

What’s Wrong With Socialism?  See our Socialism vs Capitalism page.

The organization is supported by Barbados, the United States, Grenada, Jamaica and Uruguay, who attended the initial meeting, as well as organizations such as the Organization of American States and the European Union. In addition, the Venezuelan opposition has given their support.

The Lima Group supported the sanctions Panama placed against high-level Venezuelan officials, which the Panamanian government accused of money laundering, supporting terrorism and the funding of weapons of mass destruction, and defended Panama after the Bolivarian government retaliated.

Among other issues, the Lima Group:

The Lima Group has overtly condemned Venezuela’s presidential elections called for by the Maduro government, describing them as unobserved, unjust and undemocratic. Days before the planned election date, the Lima Group – alongside the United States and the European Union – called for the cancellation of the election and prepared for responses should the election be held. Following the election which strengthened President Maduro’s position, the fourteen member nations of the Lima Group recalled their ambassadors from Venezuela. (from wikipedia) Read a previous article on Venezuela: