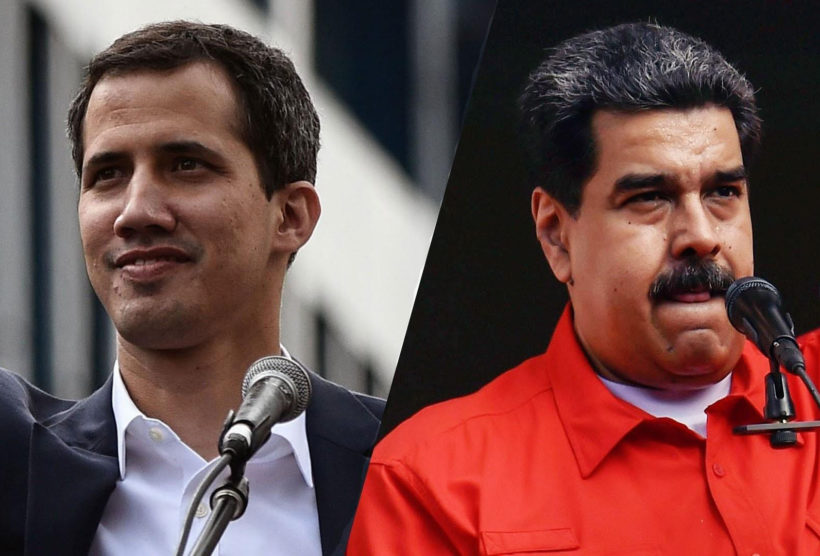 (by UPI staff, United Press International) –[Venezuelan opposition leader Juan Guaido declared himself interim president on Wednesday, with the backing of Washington, the EU, Canada and many Latin American nations. In response, socialist President Nicolas Maduro cut relations with the United States, ordering all U.S. diplomats to leave the country within 72 hours.].

“The United States does not recognize the Maduro regime as the government of Venezuela,” Pompeo said in a statement.

Pompeo then called on the Venezuelan military and security forces to continue to protect its citizens and foreign nationals, stating that if their safety is threatened, the U.S. would respond.

“The United States will take appropriate actions to hold accountable anyone who endangers the safety and security of our mission and its personnel,” Pompeo said.

A senior official in the Trump administration warned the Maduro regime that if it harmed Guaido or other National Assembly members, the United States would impose further sanctions against Venezuela, adding that Washington had “barely scratched the surface” of economic sanctions.

The official declined to further elaborate on other…options.

Trump’s announcement came as hundreds of thousands of anti-government [anti-Maduro] protesters…demonstrated on the streets. Anti-government protesters hold their hands up during the symbolic swearing-in of Juan Guaido, head of the opposition-run congress who declared himself interim president of Venezuela until elections can be called, during a rally demanding socialist President Nicolas Maduro’s resignation in Caracas, Venezuela, Wednesday, Jan. 23, 2019. (AP Photo/Fernando Llano)

The demonstrations happened two days after a military coup attempted to overthrow Maduro, who was sworn in for a second term this month.

Maduro won snap elections in May amid a boycott by opponents. The United States, European Union and neighboring Latin American countries called the election a fraud. Protesters opposed to Maduro’s election support Guaido and want him to lead a transitional government until new elections are held. …

“In its role as the only legitimate branch of government duly elected by the Venezuelan people, the National Assembly invoked the country’s Constitution to declare Nicolas Maduro illegitimate, and the office of the presidency therefore vacant,” Trump said. “The people of Venezuela have courageously spoken out against Maduro and his regime and demanded freedom and the rule of law.”

The United States will continue to put economic and diplomatic pressure on the South American nation, Trump said. He’s also urged other South and North American nations to support Guaido and work with him to restore a constitutional democracy.

Trump’s announcement came one day after Vice President Mike Pence called Maduro a dictator who has no “legitimate claim to power.”

“As the good people of Venezuela make your voices heard tomorrow, on behalf of the American people, we say: Estamos con ustedes [We are with you],” he added in a video posted to Twitter. “We are with you. We stand with you, and we will stay with you until Democracy is restored and you reclaim your birthright of [freedom].”

In response, Maduro called for a “total absolute revision” of Venezuela’s diplomatic relations with the United States and said the country will make “political, diplomatic and defense decisions” to protect the country’s democracy. He also accused Pence of inciting the coup attempt earlier this week. …

Wednesday’s protests are about “reuniting the people to tell the world about the steps we’re going to take to end the usurpation, to achieve a transitional government and a free election,” he said.

The Venezuelan National Assembly pushed a bill Tuesday to offer amnesty for civilians and military officials who acted against Maduro. But the Venezuelan Supreme Court, in support of Maduro, ruled the National Assembly is illegitimate and its laws have no value. [The Supreme Court is supposed to be independent of the Executive Branch but isn’t; the judges are all Maduro supporters.]

Monday’s coup attempt was quickly suppressed and 27 soldiers were arrested.

[Reuters reports: Maduro has presided over Venezuela’s spiral into its worst-ever economic crisis, with hyperinflation forecast to reach 10 million percent this year. Some 3 million Venezuelans have fled abroad over the past five years to escape widespread shortages of food and medicine.].

The oil-rich nation squandered its wealth through [the socialist government’s] mismanagement, wrecking its economy and pushing up to 3 million Venezuelans to flee the country since 2014.

Published at UPI .com on January 23. Reprinted here for educational purposes only. May not be reproduced on other websites without permission from United Press International.

1. Socialist president Nicolas Maduro won a second term in May following sham elections which were boycotted by the opposition party.
a) The governments of which countries called Maduro’s election a fraud?
b) Which countries support Maduro’s government?

2. a) What announcement did President Trump make on Wednesday?
b) What did he encourage President Maduro to do?

3. a) How did Maduro respond to the U.S.’s recognition of Assembly leader Juan Guaido as the interim president?
b) What was U.S. Secretary of State Mike Pompeo’s response? Be specific.

4. What warning did the U.S. give to Maduro?

5. What does President Trump call on other governments to do?

Pray for a peaceful outcome in Venezuela.

The leaders who attended Maduro’s inauguration ceremony included presidents of Bolivia, Cuba, El Salvador and Nicaragua, along with representatives from China, Mexico and Turkey.

Notably absent, though, were representatives from the European Union and the United States, and members of the Lima Group — 13 Latin American countries plus Canada that organized to find a solution to the crisis in Venezuela, and which last week announced that they would not recognize the legitimacy of Mr. Maduro’s new term.

The Organization of American States said Thursday that it, too, would not recognize Mr. Maduro’s new term as legitimate. (from a NY Times article)