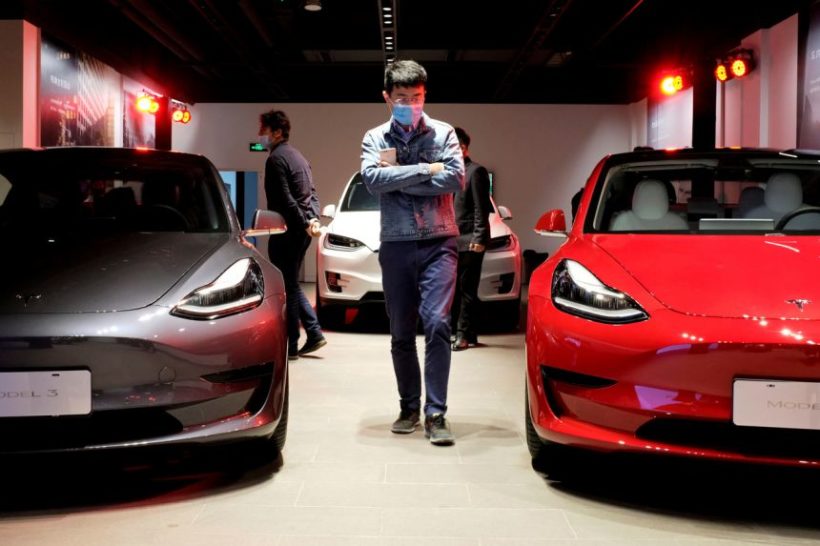 The ban was triggered by concerns that Tesla is collecting sensitive data via the cars' in-built cameras. (Photo: Reuters)

(Bloomberg News) — Tesla cars have been banned from Chinese military complexes and housing compounds [and employees of key state-owned companies] because of concerns about sensitive data being collected by cameras built into the vehicles.

The order, issued by the military, advises Tesla owners to park their cars outside of military property, according to people familiar with the directive who asked not to be identified because the information is private. The ban, relayed to residents of military housing and others this week, was triggered by concerns that the world’s biggest maker of electric vehicles is collecting sensitive data via the cars’ built-in cameras in a way the Chinese government can’t see or control, one of the people said.

Images of what was purported to be a notice about the ban were also circulating on Chinese social media. Multi-direction cameras and ultrasonic sensors in Tesla cars may “expose locations” and the vehicles are being barred from military residences to ensure the safety of confidential military information, the notice said. …

Tesla, like many other automakers including General Motors Co., uses several small cameras, mainly located on the outside of the vehicle, to help guide parking, autopilot and self-driving functions. Most Tesla models also have an interior camera mounted above the rear view mirror that can be used to detect whether a driver is looking at the road, looking down at their lap, wearing sunglasses, or looking at something else entirely.

The California-based company — which produces Model 3s and Model Y SUV crossovers at a Gigafactory near Shanghai — hasn’t shied away from that fact, with Chief Executive Officer Elon Musk tweeting in April 2019 that the internal camera is there “for when we start competing with Uber/Lyft and people allow their car to earn money for them as part of the Tesla shared autonomy fleet.”

“In case someone messes up your car, you can check the video,” Musk explained.

…Concern over this program contributed to the ban by the military, one of the people said.

None of the in-car cameras in Teslas sold in China are turned on or part of the FSD (full self driving) beta trial, the Tesla representative said. Tesla’s privacy policies comply with national laws and local regulations in China, the person said.

China, the world’s biggest market for EVs, is key to Musk’s global growth ambitions. The carmaker received significant support from the state to build the factory near Shanghai, its first outside of the U.S., and Musk’s strategy has been one of deference to the government, in contrast to his more combative approach in the U.S.

Recently, though, the tone seems to have shifted. Tesla was called in by Chinese regulators over quality and safety issues with its cars, including battery fires and abnormal acceleration. The automaker was also forced into issuing a public apology to China’s state grid in early February after a video purportedly showed staff blaming an overload in the national electricity network for damage to a customer’s vehicle.

Musk, appearing on Saturday at the China Development Forum, a conference organized by a unit of the country’s State Council, in a session titled: The Next Disruptive Innovation?, said the carmaker would be “shut down everywhere” if it used the technology in its cars for spying.

This isn’t the first time Tesla has found itself at the center of controversy over the use of cameras. Last week, a group of hackers said they breached a trove of security-camera data collected by Silicon Valley startup Verkada Inc., gaining access to many different types of footage, including some from inside a Tesla warehouse in Shanghai.

The hackers said they obtained access to 222 cameras in Tesla factories and warehouses and that the data breach was carried out to show the pervasiveness of video surveillance and the ease with which systems could be broken into. Tesla China told Bloomberg it was one of its suppliers that had been hacked, and that data from the Chinese Gigafactory is stored in secure local servers.

— With assistance by John Liu, Chunying Zhang, and Jing Li

Published at bloombergnews .com on March 19 (updated March 20). Reprinted here for educational purposes only. May not be reproduced on other websites without permission.

3. What is Tesla’s stated purpose for the many cameras located mainly on the outside of the vehicle?

4. What assurance did a Tesla representative give in response to China’s ban?

5. How does Elon Musk’s strategy in addressing the Chinese Communist government differ from that of his approach to the U.S. government, according to the Bloomberg reporters?

6. The Chinese government is notorious for spying/attempted spying in the U.S. (and around the world). What is your reaction to their ban on Teslas on military bases, etc.?