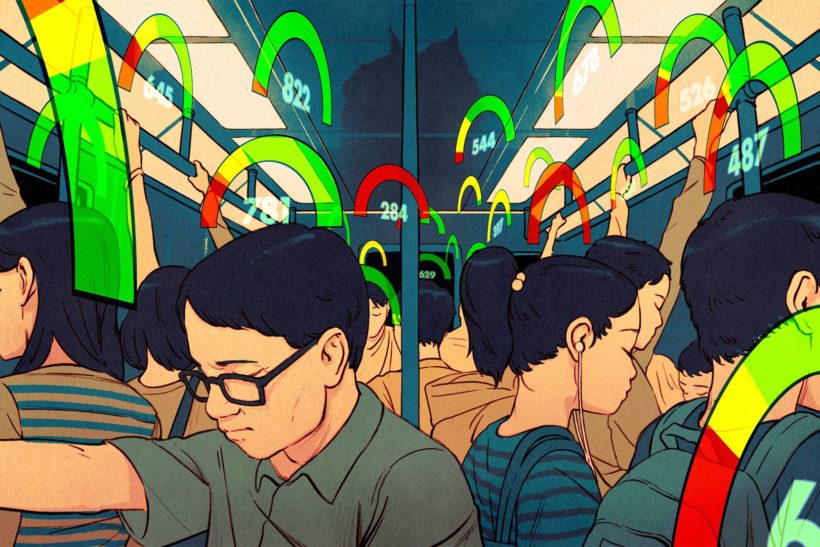 An even more disturbing dimension to the social credit phenomenon: The ways in which it may incentivize citizens to act as enforcers for the authoritarian communist party-state.

The UK’s Guardian reports that Chinese courts banned travelers from buying flights 17.5 million times by the end of last year, and that citizens put on blacklists for so-called “social credit offenses” were prevented from purchasing train tickets 5.5 million times. The report said: “Once discredited, limited everywhere.”

The social credit system, which is still being built and now exists more as a patchwork of local and regional systems, purports to incentivize trustworthy behavior through various penalties when Chinese citizens commit a range of offenses, including not paying taxes, jaywalking, smoking on a train, walking their dogs without a leash or taking drugs. …

Local governments and agencies have been piloting aspects of the system, which will eventually give every Chinese citizen a personalized score. Critics said authorities in China were using technology and big data to create an Orwellian state of mass surveillance and control.

Authorities have previously used blacklists to limit the travel of some citizens, but the social credit system appears to have expanded the practice. China’s supreme court said in 2017 that 6.15 million citizens had been barred from taking flights because of social credit offenses.

The social credit system aims to incentivise “trustworthy” behavior through penalties as well as rewards. According to a government document about the system dating from 2014, the aim is to “allow the trustworthy to roam everywhere under heaven while making it hard for the discredited to take a single step.”

Experts say the system will lead to a crackdown on anyone who challenges China’s government.

For instance, journalist Liu Hu, who writes about censorship and corruption in China, has been arrested and fined because of his [criticism of the Communist government]. According to Wired, Liu found that his name was placed on a list of dishonest persons who is not qualified to buy a plane ticket, buy property or take out a loan.

“There was no file, no police warrant, no official advance notification. They just cut me off from the things I was once entitled to,” he told The Globe and Mail. “What’s really scary is there’s nothing you can do about it. You can report to no one. You are stuck in the middle of nowhere.”

According to The Guardian, Chinese citizens can also be prevented from buying insurance, real estate or investment products if they run afoul of the credit system. …

Compiled from articles at FoxNews .com on March 3 and UK Guardian on March 1. Reprinted here for educational purposes only. May not be reproduced on other websites without permission.

2. For CHINA:
a) list the who, what, where and when of the news item
b) How many people in China were banned by the government from traveling due to a bad “social credit” report card?
c) What is the Communist government’s social credit system? What types of offenses can give a person a bad “Social credit” score? What types of punishments will they be given? Be specific.
d) Why was Chinese journalist Liu Hu placed on a list of dishonest persons who is now barred from traveling or buying property? What really scares him about it?

The Communist government’s “social credit” system is a Big Brother method for controlling every person’s behavior. Those who lose points for ‘wrong’ behavior risk the following and more:

1. Banned from flying or getting the train.
2. Slow internet speeds.
3. Self or kids being banned from the best schools.
4. Blocked from getting the best jobs.
5. Banned from the best hotels.
6. Getting your dog taken away. The eastern Chinese city of Jinan started enforcing a social credit system for dog owners in 2017, whereby pet owners get points deducted if the dog is walked without a leash or causes public disturbances. Those who lost all their points had their dogs confiscated and had to take a test on regulations required for pet ownership.
7. Being publicly named as a bad citizen: Naming and shaming is another tactic available. A a 2016 government notice encourages companies to consult the blacklist before hiring people or giving them contracts. However, people will be notified by the courts before they are added to the list, and are allowed to appeal against the decision within ten days of receiving the notification. It’s not clear when the list will start to be implemented.

(the above is excerpted from an Oct. 2018 Business Insider report “China has started ranking citizens with a creepy ‘social credit’ system — here’s what you can do wrong, and the embarrassing, demeaning ways they can punish you”)

An even more disturbing dimension to the social credit phenomenon: The ways in which it may incentivize citizens to act as enforcers for the authoritarian communist party-state and help to repress their own compatriots. While the nationwide system is not yet in place, examples of similar incentives can be found in a variety of existing Chinese Communist Party (CCP) policies and practices.

Propaganda prizes
One party-backed reward system that made headlines is a new mobile phone application meant to promote “Xi Jinping Thought” and other propaganda: “Study Xi, Strengthen China”. Along with a steady stream of Xi quotes and state media reports, the app—which has already been downloaded tens of millions of times—incorporates quizzes and other opportunities for users to earn “Xi study points” that can be cashed in for real-world prizes. Importantly, one accumulates points not only for consuming information, but also for sharing articles with friends.

Freelance journalist James O’Malley tweeted during his trip to China on Oct. 29, 2018:

Here’s a dystopian vision of the future: A real announcement I recorded on the Beijing-Shanghai bullet train. (I’ve subtitled it so you can watch in silence.)