“The ignorance of one voter in a democracy impairs the security of all.”
~ President John F. Kennedy 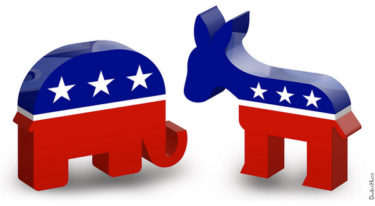 In addition to the Congressional races, 39 state and territorial governorships and 46 state legislatures (except Louisiana, Mississippi, New Jersey and Virginia), four territorial legislatures and numerous state and local races will take place.

In addition, numerous ballot measures, mayoral races, and a variety of other local offices are on the ballot.

QUESTIONS:
1. What percent of voters turned out for the 2018 midterms?
2. In the 2018 midterms, did President Trump’s party (Republicans) win or lose seats in the Senate? in the House? How many in each? Why do you think this is so?

For links to all races by state (federal and local), go to Ballotpedia and click on your state.  You will find information on all races on your state page.

To find out how members of Congress have voted on any proposed legislation, visit govtrack.us [NOTE: Don’t enter your address, use 2nd box to just choose your state] .  GovTrack says it “helps ordinary citizens find and track bills in the U.S. Congress and understand their representatives’ legislative record.”

QUESTION:
Discuss how the majority party in both houses affects proposed legislation and also the federal government’s budget, spending and taxation.
See Wikipedia for a brief explanation.

QUESTION:
Name the candidates running for office in your state.  Include party affiliation and office each candidate is running for.

The map below from UVA Center for Politics predicts possible election results for governors as of July 2018: 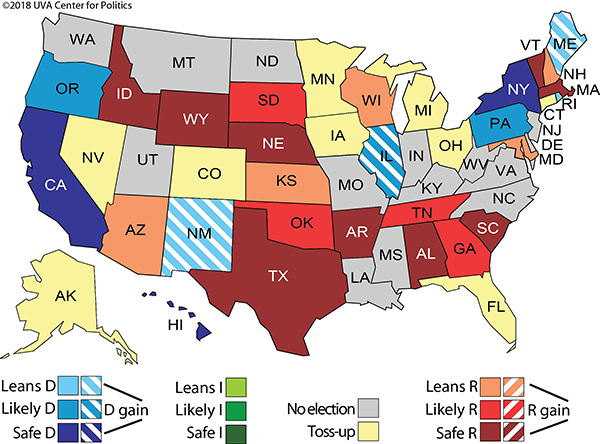 Map from 2018 UVA Center for Politics

THE CANDIDATES ON THE ISSUES:

Visit the campaign websites and YouTube pages for candidates running for office in your state/county/city to hear where they stand on the issues.
(To find the candidates’ pages, search for: “‘name of candidate’ youtube page”).
Answer the questions below or complete the pdf worksheet: 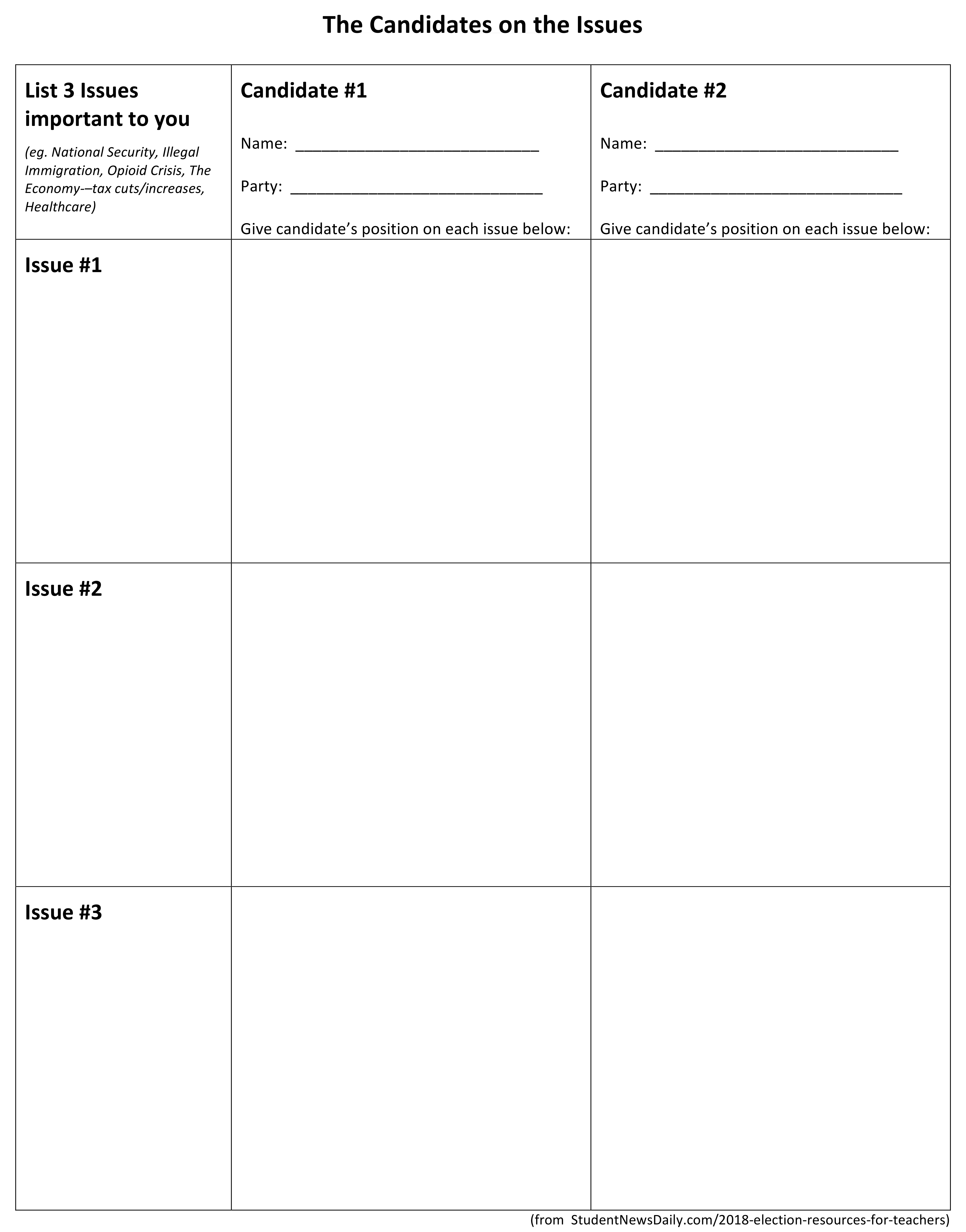 QUESTIONS:
1. List 3 issues you believe are important to consider in this election.
2. What does each candidate say they would do to address each issue?  (What are his/her solutions?)
3. What actions has each taken (legislation) to support or undermine his/her position on each issue?

NOTE:  The U.S. has a two-party system, which distinguishes American government from most other democracies. Most Western democracies, particularly those in Europe, have multiparty elections and parliaments, but the American government traditionally has had a two-party system. Since the Civil War the two parties have been the Republican Party and the Democratic Party.

From time to time, third parties have gained traction with the electorate, most recently the Reform Party, led by Ross Perot, who won 19% of the popular vote in the 1992 presidential election.  Third parties can sometimes push the major parties to consider their position on a specific issue (generally when they believe the party is not taking a strong enough stand, or is taking a moderate position on the issue).  Few third-party candidates hold elected office at the state and national level. There are dozens of “third parties” in the U.S. including the Constitution Party (conservative), the Green Party (liberal) and the Libertarian Party (in general socially liberal, fiscally conservative).

The central focus of a debate is to provide voters with information they need to measure the suitability of the candidates for office.

Watch the debates for your state’s senator, representatives and governor. Pay attention to the questions the moderator asks. View the “Debate” pdf worksheet to answer the questions below: 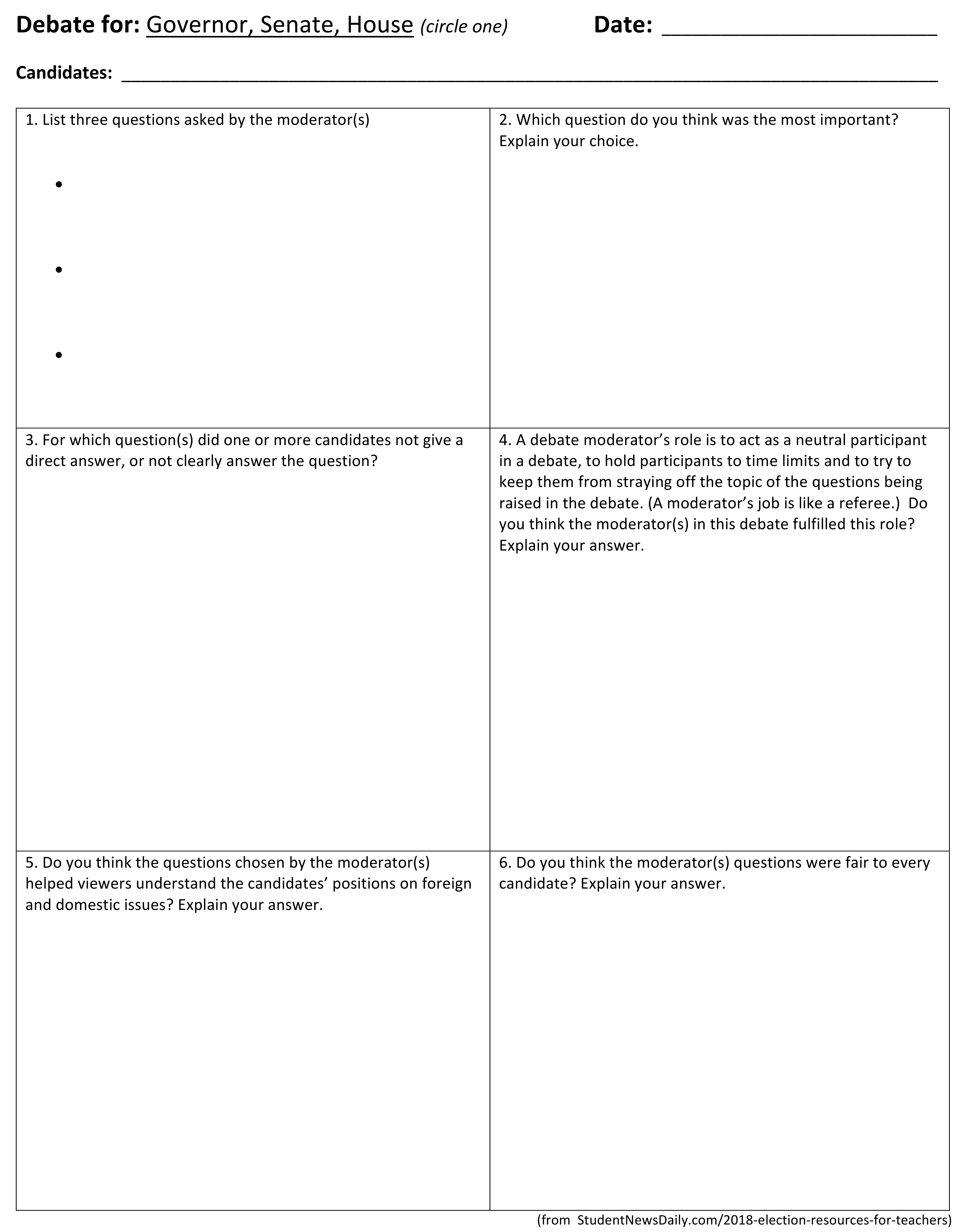 2. Which question do you think was the most important? Explain your choice.

3. For which question(s) did one or more candidates not give a direct answer, or not clearly answer the question?

4. A debate moderator’s role is to act as a neutral participant in a debate, to hold participants to time limits and to try to keep them from straying off the topic of the questions being raised in the debate. (A moderator’s job is to act like a referee.) Do you think the moderator in this debate fulfilled this role? Explain your answer.

5. Do you think the questions chosen by the moderator helped viewers understand the candidates’ positions on the issues important to voters? Explain your answer.

6. Who was the moderator for this debate? Do you think the moderator’s questions were fair to every candidate? Explain your answer.

CHALLENGE: Are any candidates holding debates for your state or local offices?
Attend a local debate between the candidates. Pay attention to the questions the moderator asks.
Did the moderator’s questions cause each candidate to clearly explain his position on each issue?  Explain your answer. OR, use the same worksheet above and answer those questions.

Check out StudentNewsDaily’s “Conservative vs. Liberal Beliefs” chart.  [NOTE: This is a general overview of the conservative and liberal positions on the issues.]

QUESTION:
Read through the chart.  For each issue, state which position best represents your beliefs and explain why.

Links to all 50 states’ Election Board websites are provided here.  (Note:  Many states include information and/or links to candidates’ websites.)

QUESTIONS:
Visit your state’s official election webpage.
1.  What requirements does a prospective candidate need to meet to have his/her name on the ballot in your state?
2.  What type of information would you like to see on your state’s elections page? Send an email to your state’s Secretary of State with your suggestion. Identify yourself with your name, school and city. Be clear, concise and polite. (Find contact information for your Secretary of State on your state’s election page, or for a list of all state Secretaries, go to: nass.org)
CHALLENGE QUESTION:  What issues are important to voters in your state in the upcoming election?  How do the opposing candidates stand on the issues?

For links to all races by state (federal and local), go to ballotpedia.org, scroll down to the map and click on your state, or go to
Ballotpedia’s 2018 State Legislative Elections page.

NOTE: A state government trifecta is a term to describe when the state house, the state senate, and the office of the governor are each controlled by the same political party. As of August 2018, 34 states have trifectas – Republicans hold 26 trifectas; Democrats hold 8. (For details, see a Ballotpedia article.) 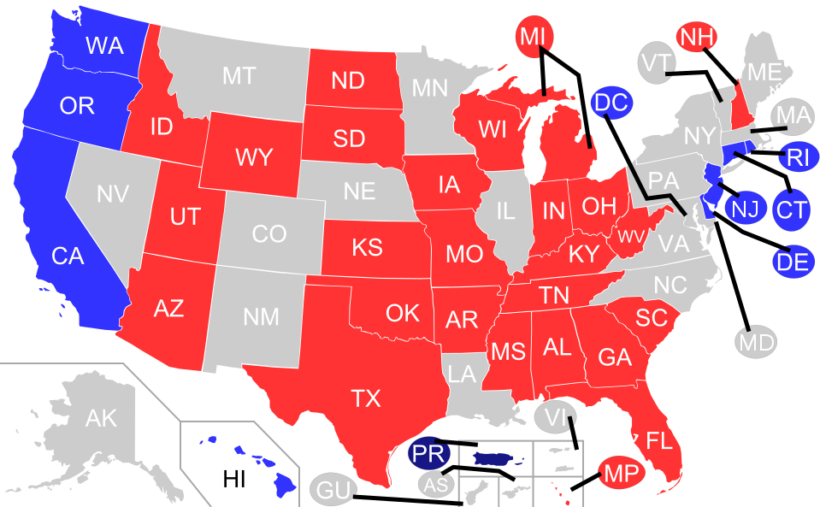 QUESTION:
In the 2018 midterms, did the Republicans or Democrats lose trifectas in their any states? Name the states. Why do you think this is so?

Anything that appears on a ballot other than a candidate running for office is called a ballot measure.  Ballot measures are broken down into two distinct categories – initiatives (or propositions) and referendums.

QUESTIONS:
Does your state practice direct democracy through the ballot measure process?
If so, what initiatives or referendums are on your state’s ballot in the upcoming election?
If there are ballot measures in your state, how would you cast your vote on each question? 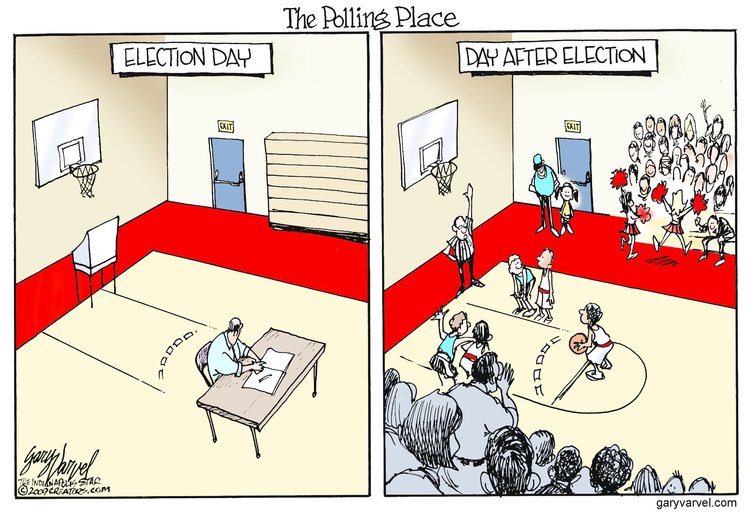 A National Platform is the official statement of a political party’s position on a wide variety of issues. Each issue category included in the Platform is a “plank.” A new Platform is adopted every four years by both the Democratic and Republican parties and is generally approved during the party’s national convention.

(This page last updated 10/31/18. Information compiled from various sources including Ballotpedia and Wikipedia.)