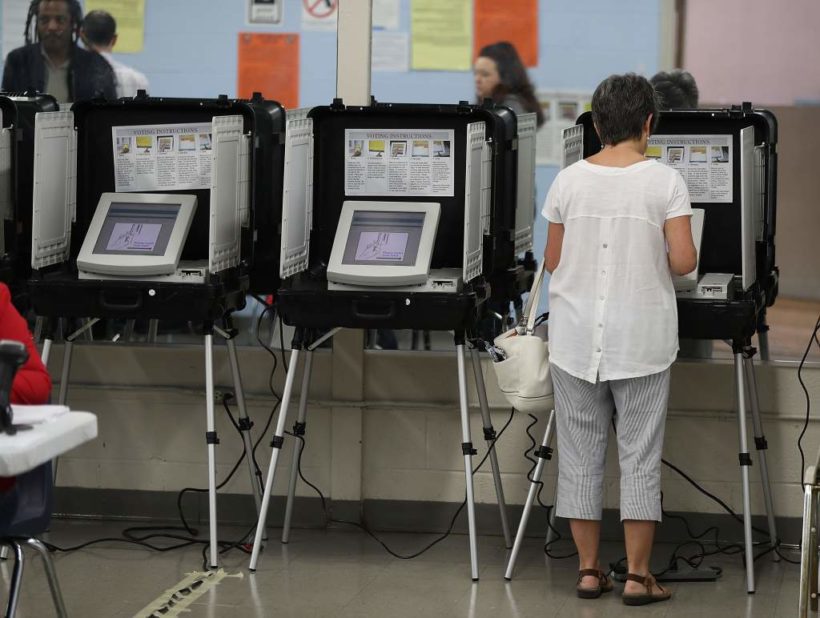 Georgia voters use electronic voting machines to cast their ballots at a polling place in 2017.

(from the Associated Press at CBSNews) – A federal judge on Monday said forcing Georgia to scrap its electronic voting machines in favor of paper ballots for the upcoming midterm elections is too risky, noting the potential for last-minute confusion – though she said the state needs to move quickly to address concerns [that the state’s electronic voting machines could be vulnerable to hacking].

“Ultimately, any chaos or problems that arise in connection with a sudden rollout of a paper ballot system with accompanying scanning equipment may swamp the polls with work and voters — and result in voter frustration and disaffection from the voting process,” she wrote in a 46-page decision. “There is nothing like bureaucratic confusion and long lines to sour a citizen.”

Voting integrity advocates had sued state and county election officials, arguing that the touchscreen voting machines Georgia has used since 2002 are vulnerable to hacking and provide no way to confirm that votes have been recorded correctly because there’s no paper trail. They had sought an immediate change to paper ballots for the midterm elections while the case is pending.

[An attorney for the plaintiffs, David Cross, said that while they were disappointed the judge had not imposed paper ballots for November, her decision was nevertheless a victory because she agreed the current election system is “woefully inadequate and insecure.”].

The case is being watched closely because Georgia is among five states, along with more than 300 counties in eight other states, that exclusively use touchscreen voting machines [a type of Direct Recording Electronic (DRE) machines] that provide no paper record, according to Verified Voting, a nonprofit group focused on ensuring the accuracy of elections. [To see if your state is one of the five, go to Ballotpedia.]

…Totenberg chastised the state, saying it had been slow to respond to “serious vulnerabilities of its voting system” as well as software and hardware issues that have long been evident and said “further delay is not tolerable in their confronting and tackling the challenges before the State’s election balloting system.”  …

The judge noted a general consensus among cybersecurity experts and federal officials about the insecurity of electronic voting machines with no paper record, specifically pointing to a Sept. 6 report from the National Academy of Sciences report that says all elections should be conducted with “human-readable paper ballots” by 2020 with every effort made to use them in this year’s general election.

“Advanced persistent threats in this data-driven world and ordinary hacking are unfortunately here to stay,” she wrote, adding that state elections officials “will fail to address that reality if they demean as paranoia the research-based findings of national cybersecurity engineers and experts in the field of elections.”

[GA Secretary of State] Kemp, who rejected federal offers of assistance with election system security in 2016, has conceded that the current machines should be replaced. He established a commission earlier this year to look into a change and last month called for proposals to implement a system with voter-verifiable paper records in time for the 2020 presidential election.

“This process that we’re going through would be an orderly process to changing the system, and that’s the way it should be done – to where you don’t have problems,” Kemp told CBS affiliate CBS46.

But he and other election officials argued the machines are still secure and a last-minute change would be costly and cause chaos. …

From an Associated Press article at CBSNews .com. Reprinted here for educational purposes only. May not be reproduced on other websites without permission from CBS News.

1. Use of touch-screen machines peaked in 2006, according to data from the Pew Research Center and Verified Voting. Most voters now use what are called optical-scan systems—voting by paper ballots that are then scanned and counted by computerized scanners. Other electronic voting machines also have paper backups in response to concerns about integrity.
a) What are direct-recording electronic [DRE] machines? (the type used in Georgia)
b) How many states use these types of machines?

2. How did U.S. District Judge Amy Totenberg rule in the challenge to Georgia’s use of electronic voting machines this week?

3. How did Judge Totenberg explain her ruling?

4. What did Judge Totenberg acknowledge about the electronic voting machines? Be specific.

5. a) Who were the plaintiffs in the case?
b) What argument did the plaintiffs make?
c) What had they asked the court to do while the case was pending?

6. How important do you think it is for every state, county and municipality to use voting machines that have a paper record? Explain your answer.

7. Do you think the judge made the right decision – that switching to paper ballots now for the November midterms would “result in voter frustration and disaffection from the voting process”? Explain your answer.

Per wikipedia: In 2008 before she became a federal judge, Totenberg contributed $1750 to Barack Obama’s presidential campaign. In 2010 she was appointed to the court by President Obama. Her sister is Nina Totenberg, the American legal affairs correspondent for NPR.

Watch a news report during the hearing phase, before the judge made her decision: