What you need to know before the midterm election 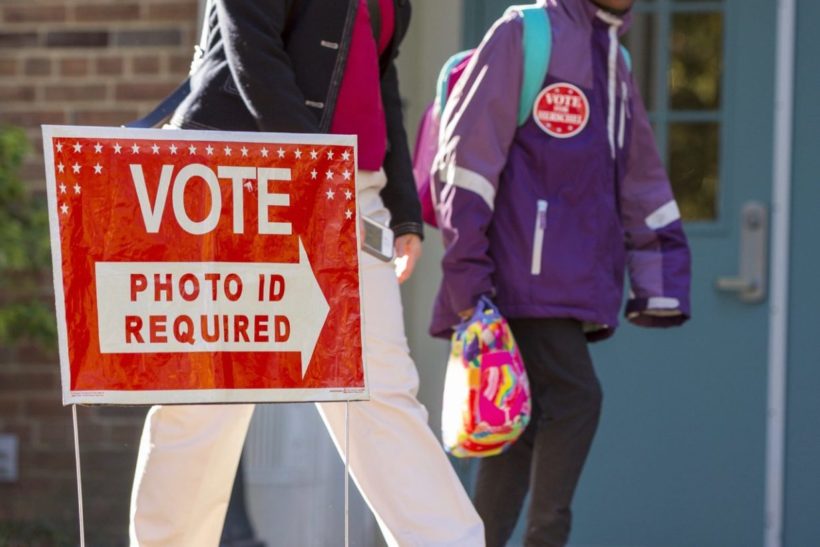 The requirement for voter photo identification is one of six amendments that North Carolina residents will decide during midterm elections. (Photo: Q City Metro/Shutterstock)

(by Los Angeles Times staff and — Mark Z. Barabak and David Lauter) – The midterm is fast approaching. How many races are actually competitive? Which polls should you trust? … Here’s what you need to know before the Nov. 6 election.

All 435 House seats are on the ballot. How many are truly competitive?

Here’s the main thing to keep in mind about the contest for control of the House this year: About 5 out of 6 seats in Congress really aren’t in doubt. They’re either heavily Democratic or heavily Republican, and they’re not likely to flip.

The battleground consists of roughly 60 to 70 districts nationwide, nearly all of which are in territory that Republicans have held for years – in some cases for decades. Democrats have to net at least 23 additional seats nationwide to get a majority. …

… A takeover is certainly possible, but a lot of the races in these districts are very close. So if anyone pretends to know precisely how it’s going to come out, tune them out.

What about the Senate?

Republicans currently control the Senate, 51 to 49.

Democrats need to flip at least two seats to gain a majority, which would give them the ability to block President Trump’s appointees to federal judgeships and a much stronger hand in legislation. But gaining those two seats is a tall order.

The 35 Senate races this year include a [larger] number of Democratic incumbents trying to hang on in conservative-leaning states, many of which Trump carried by sizable margins. With 29 seats to defend, compared with just six for the GOP, Democrats will be hard-pressed to avoid losing ground, much less gain any. …

How is President Trump affecting candidates?

…Midterm elections, virtually without exception, are a referendum on the president. … Polls show large numbers of people indicating that they feel a need to vote in the midterm to show either support for or opposition to the president. …

With so many polls, how can you tell if one is credible and accurate?

…In the 2016 presidential election, despite all the criticism afterward, polls had correctly forecast almost all 50 states.

So how come people so often say the “polls got it wrong”? In 2016, a lot of folks who like to make predictions looked at the polls that showed Hillary Clinton leading and made two big mistakes. First, they forgot that polls involve probabilities, not certainties, and, second, they forgot that national polls don’t tell you how individual states will fall.

What do we mean? Suppose we tell you that in a particular race, the odds are 90 to 10 that your party’s candidate will win. You might think that’s pretty much a sure thing. But another way of saying the same thing is that 1 out of 10 times in this situation, the underdog will win. With hundreds of contests each election year, 90-to-10 odds are very likely to lead to some upsets. …

How can you tell good poll data from bad poll data?

A good poll will disclose all the questions that were asked. That way you can tell if some were worded in a way that’s designed to skew the results. It will also disclose who conducted the poll, how it was conducted, when it was taken, how big the sample was and what the margin of error was. …

Don’t rely too much on polls released by partisan organizations or campaigns. They typically will take several polls and only publicly release those that support their position.

Finally, don’t just rely on a single poll. No poll is correct all the time. So if you’re paying attention to a specific race, check out the average of several polls. You’ll be much less likely to be fooled.

How do certain age groups…differ when it comes to voter turnout?

…In researching a story about efforts to get more young voters to turn out this year, I found out that 18-to-34-year-olds have voted at lower rates than any other age group in every midterm going back to 1978. That’s 40 years of [lower] turnout for young people.

In general, voter turnout goes up pretty steeply with age. In other words, older folks vote more consistently than younger ones. That’s especially true in midterm elections like this one, as opposed to presidential elections, when more people vote overall. …

Where should you vote on election day?

You can find your local polling place online via your state’s election website.

And remember to do your homework ahead of time. As the educational nonprofit News Literacy Project reminds, double-check your facts before you vote.

Excerpted from LATimes .com for educational purposes only. May not be reproduced on other websites without permission from Los Angeles Times.

2. What do the LA Times reporters predict about the outcome of the Senate race?

3. How do the reporters explain the fact that the polls got it wrong in 2016? (News outlets across the board predicted a win for Democratic candidate Hillary Clinton and many were shocked and upset when she lost.)

4. President Trump is very unpopular with the media, many professional athletes, musicians and almost all celebrities (except for Kanye). There have been numerous instances of individuals wearing MAGA hats being criticized, yelled at, or having the hat knocked off the person’s head or stolen. Trump supporters are called racists, bigots, homophobes, misogynists…

Do you think a voter answering poll questions, knowing how unpopular it is to support Trump, might not tell a pollster that they will or did vote for him, thus possibly skewing the polls? Explain your answer.

5. a) Top issues important to voters in the 2018 midterms include: health care, the economy, taxes, illegal immigration and the migrant caravan, a border wall, the treatment of Judge Kavanaugh during his confirmation hearings…

Which issue do you think will most likely bring voters to the polls on election day in your state? Explain your answer.

b) Another factor for voting is that the outcome of the elections could tip the balance of power in Congress, possibly giving President Trump the votes he need to pass legislation that supports his agenda, or giving Democrats the power they need to block President Trump from moving his agenda forward. How important do you think that will be in determining the number of people who vote? Ask a parent the same question.

Following the election next week, find the answers to the following:
a) Did these 2 facts hold true in the midterms following Donald Trump’s election?
b) What was overall voter turnout?
c) What was voter turnout in your state?
d) How many seats did each party win/lose in the House – and in the Senate?