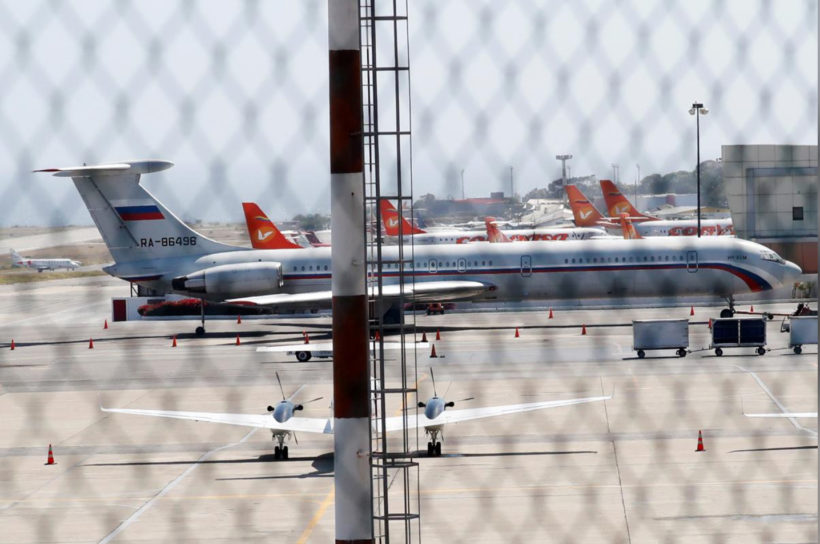 An airplane with the Russian flag is seen at Simon Bolivar International Airport in Caracas, Venezuela March 24, 2019. (Photo: Reuters/Carlos Jasso)

That comes three months after the two nations held military exercises on Venezuelan soil that socialist President Nicolas Maduro called a sign of strengthening relations, but which Washington criticized as Russian encroachment in the region.

Reporter Javier Mayorca wrote on Twitter on Saturday that the first plane carried Vasily Tonkoshkurov, chief of staff of the ground forces, adding the second was a cargo plane carrying 35 tons of material.

An Ilyushin IL-62 passenger jet and an Antonov AN-124 military cargo plane left for Caracas on Friday from Russian military airport Chkalovsky, stopping along the way in Syria, according to flight-tracking website Flightradar24.

The cargo plane left Caracas on Sunday afternoon, according to Adsbexchange, another flight-tracking site.

“Russia has various contracts that are in the process of being fulfilled, contracts of a technical military character,” Sputnik quoted the source as saying.

A Reuters witness saw what appeared to be the passenger jet at the Maiquetia airport on Sunday.

The Trump administration has levied crippling sanctions on Venezuela’s oil industry in efforts to push Maduro from power following a sham election and has called on Venezuelan military leaders to abandon him in support of the people. Maduro has denounced the sanctions as U.S. interventionism and has won diplomatic backing from the authoritarian regimes of Russia and China.

Maduro on Wednesday said Russia would send medicine “next week” to Venezuela, without describing how it would arrive, adding that Moscow in February had sent some 300 tons of humanitarian aid.

Venezuela in February had blocked a convoy carrying humanitarian aid for the crisis-stricken country that was coordinated with the team of opposition leader Juan Guaido, including supplies provided by the United States, from entering via the border with Colombia. [Guaido is recognized as the interim president of Venezuela by at least 70 countries, including most South and Central American countries.]

Published at Reuters .com on March 24. Reprinted here for educational purposes only. May not be reproduced on other websites without permission from Thomson Reuters. 2. For RUSSIA:
a) list the who, what, where and when of the news item
b) What did Russia send to Venezuela in addition to a Russian defense official?
c) How did the media obtain this information?
d) How have Russian and Venezuelan officials responded to questions on this information?
e) Read the “Background” below for the U.S. response to Russia’s actions. Check out the links under “Resources.” Why is it important for the U.S. to oppose Russian involvement in Venezuela? (Ask a parent if unsure.)

U.S. response to Russia (from a March 25 Agence France-Presse report):

Secretary of State Mike Pompeo warned Russia Monday the United States will not “stand idly by” as Moscow inserts military personnel into Venezuela to support the regime of President Nicolas Maduro.

In a phone call with Foreign Minister Sergei Lavrov, Pompeo denounced the growing Russian military reinforcements as prolonging the political crisis in the South American country.

Pompeo told Lavrov “the United States and regional countries will not stand idly by as Russia exacerbates tensions in Venezuela,” the State Department said in a statement.

“The continued insertion of Russian military personnel to support the illegitimate regime of Nicolas Maduro in Venezuela risks prolonging the suffering of the Venezuelan people who overwhelmingly support interim President Juan Guaido,” he said. Guaido is supported by the United States and most Latin American and European nations but he retains the support of Russia and China, US rivals who have offered political and economic support to him.