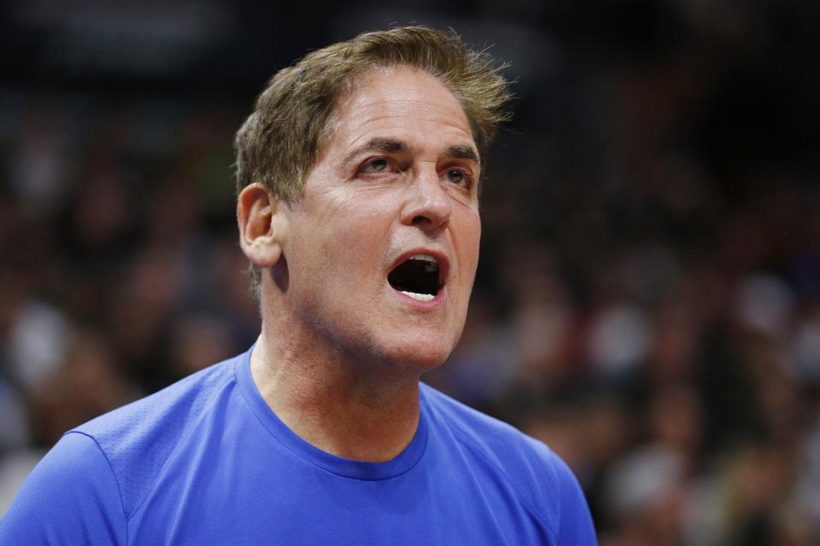 Dallas Mavericks owner Mark Cuban hasn't played the National Anthem at his team's home games this season and doesn't plan on doing so moving forward, he confirmed to The Athletic on Tuesday, before he reversed course later that day. (Getty Images)

Feb. 10 (UPI) — NBA teams will continue play the national anthem before games, in accordance with policy, the league said Wednesday. The directive came a day after the Dallas Mavericks announced they no longer would play the song.

“With NBA teams now in the process of welcoming fans back into their arenas, all teams will play the national anthem in keeping with longstanding league policy,” NBA chief communications officer Mike Bass said in a statement.

Dallas has not played the Star-Spangled Banner before any of the 13 home games — regular season or preseason — played this season at American Airlines Center in Dallas. [No fans were present at those games. The Mavericks opened home games to a limited amount of fans starting this week].

Mavericks owner Mark Cuban responded shortly after the league issued the statement and said the team will resume the tradition and play the anthem Wednesday in Dallas.

“We respect and always have respected the passion people have for the anthem and our country,” Cuban said in a statement issued to The Athletic originally announcing the end of the anthem. “I have always stood for the anthem with the hand over my heart — no matter where I hear it played.

Cuban told ESPN, The Athletic and the Dallas Morning News on Tuesday that he directed the team to stop the pregame tradition. Cuban did not specify a reason for the decision at the time, but said he consulted NBA commissioner Adam Silver on the issue last November. (Apparently Silver did not oppose Cuban’s decision until it was made pubic on Tuesday.) Cuban told the New York Times‘ Marc Stein “It was my decision, and I made it in November.”  He declined to elaborate further.

NBA rules have required players to stand during the national anthem since the 1980s, but Silver has not disciplined players who have knelt in recent years in protest. [The vast majority of NBA players and many coaches kneeled during the national anthem during the NBA’s restart last summer in Orlando, Florida, when the league incorporated messaging supporting the Black Lives Matter movement and other social justice causes in the court design and other ways.]

“I recognize that this is a very emotional issue on both sides of the equation in America right now,” Silver said during a press conference in December, “and I think it calls for real engagement rather than rule enforcement.”

The kneeling protests have been a response to perceived social injustice, but also have drawn criticisms and become a controversial topic in the United States. Nearly every major U.S. professional sports league have seen players take a knee during the anthem in protest [at first with the NFL’s Colin Kaepernick against what he said is widespread police brutality and then expanded to perceived systemic racism. Those who support the military and the police do not hold the view that there is widespread systemic racism in police departments or in the U.S. as a whole and say it is disrespecting our men and women in uniform, and our country to do so.]

The Mavericks played God Bless America before games for the franchise’s first 16 years of existence before it began playing the national anthem in 1996.

The Mavericks were believed to be the first U.S. sports franchise to remove the anthem for home games before they decided to resume the tradition [the day after publicly announcing they had ended the tradition.]

In August, Cuban had responded to a Dallas radio host criticizing Mavs players for kneeling in a since-deleted tweet. He wrote, “The National Anthem Police in this country are out of control. If you want to complain, complain to your boss and ask why they don’t play the National Anthem every day before you start work.”

Published at UPI on Feb. 10. Reprinted here for educational purposes only. May not be reproduced on other websites without permission.

2. What had Mavericks team owner Mark Cuban announced the day before reversing his policy?

3. The NBA’s Mavericks had already stopped playing the Star Spangled Banner at the beginning of the season. Why did Cuban make his new policy public this week?

4. Previously, NBA commissioner Adam Silver wanted to be sensitive to the players who felt they should kneel. He said during a press conference in December, “I recognize that this is a very emotional issue on both sides of the equation in America right now and I think it calls for real engagement rather than rule enforcement.”
Why do you think he changed his mind about permitting the Mavericks to stop playing the National Anthem?

6. Consider the videos of the National Anthem being sung (see the videos under “Resources” below.)

What do these singers’ choice to sing our National Anthem say to you?

What did Kobe say? – Playing for Team USA in the 2008 Olympics, Kobe said, “Our Country Is the Best”

Read 2 editorials, a news article, and a cartoon on the NBA:

Watch This Cop Perform National Anthem After Singer Got Stuck in Traffic: Morgantown, West Virginia was a snowy mess on Jan. 12, 2016, prior to the West Virginia – Kansas basketball game. The person scheduled to sing the Star-Spangled Banner was stuck in traffic. So Carlton Smith, working the game as a University Police Officer, answered the call.