How the NBA censored me on American soil

Posted on October 17, 2019 in Thursday's Editorial 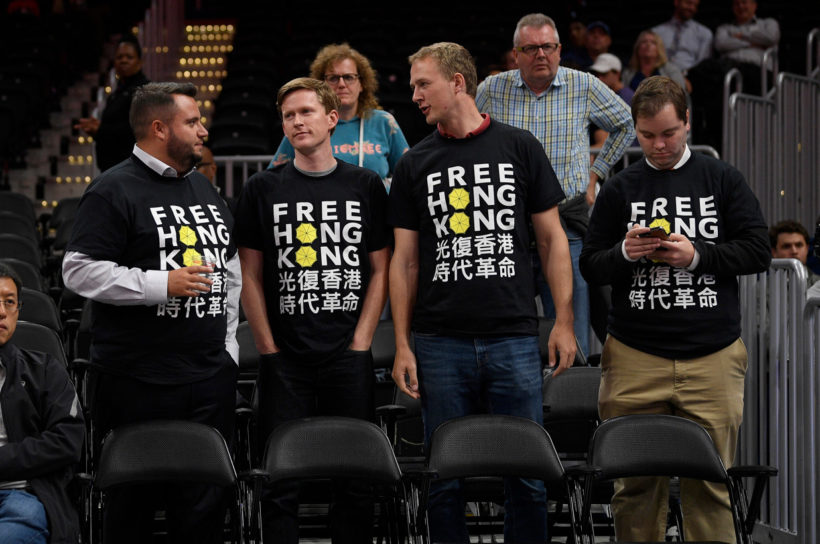 Jon Schweppe and his friends at the NBA exhibition game between the Washington Wizards and the Guangzhou Loong Lions in Washington D.C.

(by Jon Schweppe, New York Post) – I’ve been an NBA fanatic as long as I can remember. Growing up, I rooted for the Minnesota Timberwolves. I was there for the ups — who can forget that almost magical 2004 season? — and all of the downs, of which there have been far too many. I still follow the team closely today.

So as a fan of the league, I was shocked when I found myself being censored at an NBA exhibition game Wednesday night (Oct. 9) in Washington between the Washington Wizards and the Guangzhou Loong Lions. Now, I’m rethinking my allegiance to the league and wondering whether I should stop attending or even watching games altogether.

I decided to attend last night’s game after reading about an incident that took place at a Philadelphia 76ers game this week. In Philly, security guards ejected two spectators for displaying small signs with messages of support for Hong Kong’s pro-democracy dissidents.

It was an unsettling sight:

One of America’s premier sports leagues, which constantly virtue-signals about its “values,” groveling to a totalitarian regime and censoring its own fans in the United States of America — in Philly, home of the Constitutional Convention and the Liberty Bell.

I knew I had to do something. I wanted to test for myself whether the NBA would be so brazen as to censor fans again — this time in our nation’s capital, no less.

My friends and I entered Capital One Arena donning “Free Hong Kong” T-shirts given to us by an activist outside the arena and with homemade signs concealed in our clothes. We took our seats shortly before the Chinese national anthem began to play.

At that point, we stood up and unfurled a long “Free Hong Kong” banner. That immediately attracted the attention of several security guards, who came over to confiscate our sign. We asked why we were having our sign taken away. We were told [by security]:

“We respect your freedom of speech, but … we don’t have any stance on [Hong Kong]. So we’re just asking not to have any signage related to that in here tonight.”

Later, we unveiled a second message, a homemade sign that simply said “Google Uyghurs,” referring to China’s oppressed Muslims, more than a million of whom are believed to be [forcibly held by the Communist government] in re-education camps.

This sign, too, was deemed to be a problem. Within minutes, we were approached by security supervisors, who told us that we were not allowed to make political statements about China at the game. My friend pleaded that we were simply seeking to educate some of the NBA officials, coaches and players, many of whom had expressed ignorance about the issue. It was in vain: The supervisor still confiscated the sign and told us that if we continued to disrupt the game, we would be ejected.

By then, we felt we had seen enough and left of our own accord.

At this point, it’s fair to wonder: What values does the NBA really stand for? In recent years, the league has taken pains to exhibit a concern for “social justice,” with prominent players speaking out in favor of almost exclusively progressive political causes and executives encouraging such activism.

Most notably, in 2016 the NBA used its influence to push a gender ideology and lobby against a “bathroom bill” law in North Carolina that would have protected women in private spaces — going so far as to move the NBA All-Star game out of Charlotte to New Orleans. Far from avoiding political controversy, the league seemed to embrace it when the targets were American conservatives.

But the NBA’s courage to speak truth to power dissipates when faced with the power of China’s monstrous Communist regime. When Chairman Xi yanks the NBA’s corporate chain, the league tells its fans: “Shut up and watch us dribble.”

This should be very worrying for all Americans, not just sports fans. If the price of US companies doing business in China involves self-censorship, there should be no sale. Free speech is a bedrock American principle, not some cheap slogan that can be auctioned off to the highest bidder. When Beijing can force the country’s wokest sports league to practice Chinese-style censorship and authoritarianism on American soil, free trade has gone too far.

Our country and the freedoms we enjoy are too important to ignore the league’s craven conduct. Until the NBA apologizes to fans for how it has handled this incident and unequivocally commits to bedrock American values, I will be forgoing my NBA viewership for a pastime which better upholds American values. I encourage my fellow fans to do the same.

Published October 10, 2019 at NYPost .com. Reprinted here October 17, 2019 for educational purposes only. May not be reproduced on other websites without permission from the New York Post.

TV host Stuart Varney (a conservative) spoke about the NBA and China on Oct. 10:

1. What is the main idea of Jon Schweppe’s editorial?

2. Last week, CNN journalist Christina MacFarlane got shut down when she asked Houston Rockets stars James Harden and Russell Westbrook if they would refrain from speaking out on politics/social justice after China debacle. Watch the video on twitter. What is your reaction?

3. For each of the following statements by Mr. Schweppe, write agree or disagree and explain your answer.: