Posted on February 18, 2021 in Thursday's Editorial 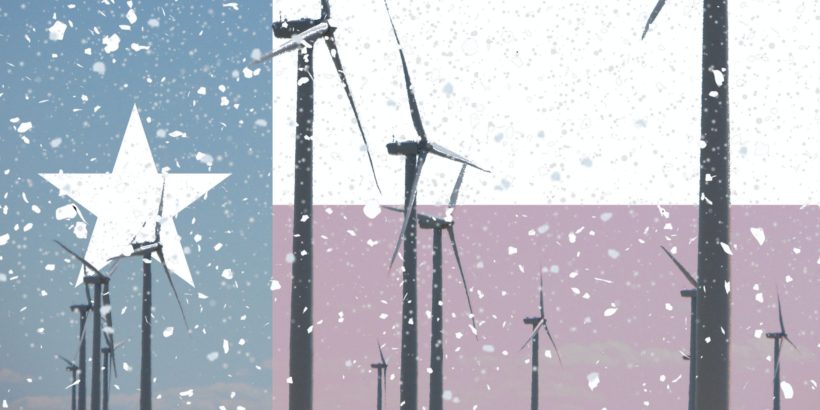 (by the Editors, Wall Street Journal) — …A mix of ice and snow swept across the country this weekend as temperatures plunged below zero in the upper Midwest and into the teens in Houston. Cold snaps happen—the U.S. also experienced a Polar Vortex in 2019—as do heat waves. Yet the power grid is becoming less reliable due to growing reliance on wind and solar, which can’t provide power 24 hours a day, seven days a week.

While Texas is normally awash in gas and oil, the Electric Reliability Council of Texas, which oversees the state’s wholesale power market, urged residents this weekend to conserve power to avoid power outages. Regulators rationed gas for commercial and industrial uses to ensure fuel for power plants and household heating.

Texas’s energy emergency could last all week as the weather is forecast to remain frigid. “My understanding is, the wind turbines are all frozen,” Public Utility Commission Chairman DeAnn Walker said Friday. “We are working already to try and ensure we have enough power but it’s taken a lot of coordination.”

Blame a perfect storm of bad government policies, timing and weather. Coal and nuclear are the most reliable sources of power. But competition from heavily subsidized wind power and inexpensive natural gas, combined with stricter emissions regulation, has caused coal’s share of Texas’s electricity to plunge by more than half in a decade to 18%.

Wind’s share has tripled to about 25% since 2010 and accounted for 42% of power last week before the freeze set in. About half of Texans rely on electric pumps for heating, which liberals want to mandate everywhere. But the pumps use a lot of power in frigid weather. So while wind turbines were freezing, demand for power was surging.

Gas-fired power plants ramped up, but the Arctic freeze increased demand for gas across the country. Producers couldn’t easily increase supply since a third of rigs across the country were taken out of production during the pandemic amid lower energy demand. Some gas wells and pipelines in Texas and Oklahoma also shut down in frosty conditions.

Enormous new demand coupled with constrained supply caused natural gas spot prices to spike to nearly $600 per million British thermal units in the central U.S. from about $3 a couple weeks ago. Future wholesale power prices in Texas for early this week soared to $9,000 per megawatt hour from a seasonal average of $25.

Prices jumped in the Midwest too, though less dramatically because there are more coal and nuclear plants. Illinois and Michigan have more gas storage than Texas, which exports much of its shale gas to other states and, increasingly, around the world in liquefied form.

Europe and Asia are also importing more fossil fuels for heat and power this winter. U.S. LNG exports increased 25% year-over-year in December while prices tripled in northern Asian spot markets and doubled in Europe. Germany’s public broadcasting recently reported that “Germany’s green energies strained by winter.” The report noted that power is “currently coming mainly from coal, and the power plants in Lausitz” are now “running at full capacity.”

Coal still accounts for 60% of China’s energy, and imports tripled in December. China has some 250 gigawatts of coal-fired plants under development, enough to power all of Germany. Unlike Democrats in the U.S., Chinese leaders understand that fossil fuels are needed to support intermittent renewables. “Power shortages and incredibly high spot gas prices this winter are reminding governments, businesses and consumers of the importance of coal,” a Wood Mackenzie consultant told Reuters recently.

Liberals claim that prices of renewables and fossil fuels are now comparable, which may be true due to [taxpayer funded] subsidies [“from the government”], but they are no free lunch, as this week’s energy emergency shows. The Biden Administration’s plan to banish fossil fuels is a greater existential threat to Americans than climate change.

Published Feb. 15, 2021 at wsj .com. Reprinted here for educational purposes only. May not be reproduced on other websites without permission from The Wall Street Journal.

1. The purpose of an editorial/commentary is to explain, persuade, warn, criticize, entertain, praise or answer. What do you think is the purpose of the Wall Street Journal editors’ opioion? Explain your answer.

2. What is the main idea of this article?

3. What is your reaction to each of the following points made in the article?

4. Most media outlets dismissed the fact that frozen wind turbines in Texas contributed to the power crisis during this extremely unusual winter storm when people were using more electricity in freezing temperatures. Why do you think this is so?