Posted on October 8, 2020 in Thursday's Editorial 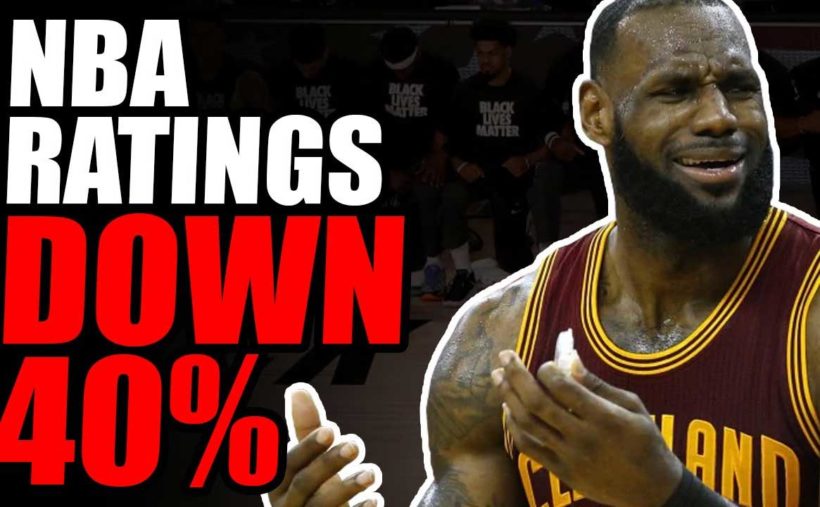 (by Bryan Preston) – The 2020 NBA Finals have suffered their worst TV ratings since pretty much forever.

This could have been a time when the league — and any other televised sports league — enjoyed mammoth ratings and served to unify the country. Millions of Americans are still on some level of lockdown, keeping them indoors more often than usual. Millions are still out of work. We suffered a lost summer during which parks were sometimes shuttered and early on, you could get arrested for going surfing alone. Having sports on TV could have been great for the country.

And we had time to watch pretty much anything that happened to be on. We all needed and wanted a diversion from real life. 2020 should have been ratings gold for the big sports leagues.

Instead, the NBA became the wokest league on earth, splashing BLM messaging on its courts and on its jerseys. The same NBA had just months before surrendered to communist China and still fails to call that heinous tyrannical government out for its — current and ongoing — slave labor practices and its Uighur concentration camps.

The NBA quite literally profits off of slave labor, not 150 years ago, but right now.

And they can’t blame America or the founding fathers for it. It’s their choice. It’s on them. Right now. Today.

So yeah, the NBA is a collection of very wealthy elitist hypocrites who’ll hector Americans over sins of the past while letting their communist sugar daddies in Beijing off the hook in the here and now.

Our friends over at Outkick the Coverage noticed NBA Commissioner Adam Silver noticing that his league has a problem: No one is watching. They’ve traded ratings gold for fool’s gold.

Silver recently appeared on ESPN with Rachel Nichols, who set him up with a very woke question. Silver slyly admitted that the NBA may get less woke for next season.

Adam Silver: We’re completely committed to standing for social justice and racial equality and that’s been the case going back decades. It’s part of the DNA of this league. How it gets manifested is something we’re gonna have to sit down with the players and discuss for next season. I would say, in terms of the messages you see on the court and our jerseys, this was an extraordinary moment in time when we began these discussions with the players and what we all lived through this summer. My sense is there’ll be somewhat a return to normalcy, that those messages will largely be left to be delivered off the floor.

And I understand those people who are saying ‘I’m on your side, but I want to watch a basketball game.’

There’s quite a bit of sleight of hand in that answer. The vast majority of Americans have been fully on board with full civil rights for everyone for decades.

(Well, other than the unborn. An entire political party is still organized around denying them even the basic right to live.)

The NBA was probably already in ratings trouble before the pandemic ever struck, just due to its China problem. Then it went all-in on non-stop SJW messaging when people just want to watch a basketball game.

“Get woke go broke” isn’t just a fun little slogan. It’s a fact. America is the least racist nation on earth. Trashing the country that makes you rich while you openly favor one of the most oppressive regimes on earth will not go unnoticed.

The NBA has a lot more work to do to win back fans, and the recent egotistical anticsof one of its most visible faces does nothing to get that work started.

Published October 7, 2020 at PJMedia .com. Reprinted here Oct. 8, 2020 for educational purposes only. May not be reproduced on other websites without permission from PJMedia.

Read two editorials and a cartoon from Oct. 2019:

1. The purpose of an editorial/commentary is to explain, persuade, warn, criticize, entertain, praise or answer. What do you think is the purpose of Mr. Chang’s editorial? Explain your answer.

3. Mr. Preston asserts: “America is the least racist nation on earth. Trashing the country that makes you rich while you openly favor one of the most oppressive regimes on earth will not go unnoticed.” What do you think? Has the NBA’s criticism of the U.S. and support for the Communist regime of China caused fans to stop watching? Explain your answer. (If unsure, ask any adult who is an NBA fan what he/she thinks.)