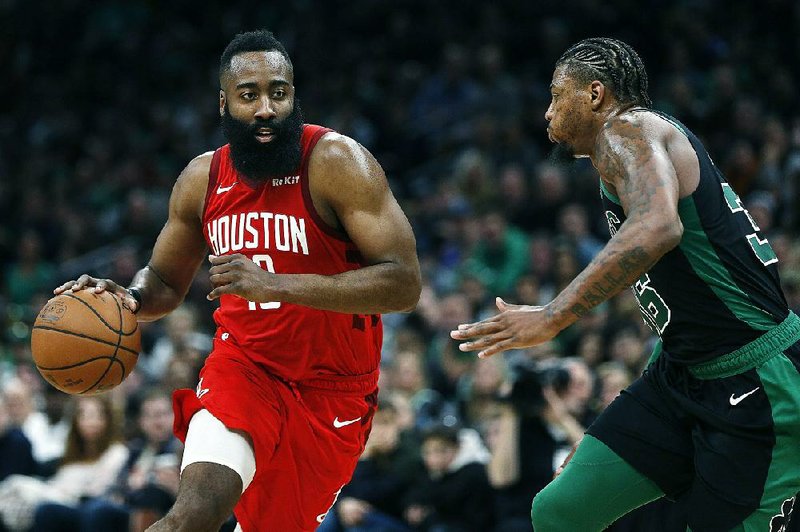 Houston Rockets' James Harden (13) drives past Boston Celtics' Marcus Smart (36) during the second half of an NBA basketball game in Boston, Sunday, March 3, 2019.

On Friday, Morey tweeted an image that said “Fight for Freedom. Stand for Hong Kong,” in support of the pro-democracy protests amid increasing tensions between Hong Kong and Beijing, which controls the former British colony.

The backlash from China was swift. The Chinese Basketball Association, whose chairman is Yao Ming, a former Rockets player who spent his whole career with the team (from 2002-2011), said Sunday it was suspending cooperation with the Rockets. (Mr. Yao has a longstanding relationship with Mr. Morey, who worked for the Rockets for the last five years of Mr. Yao’s career.)

China’s consulate in Houston asked the Texas team to “clarify [and] correct the mistakes immediately.” 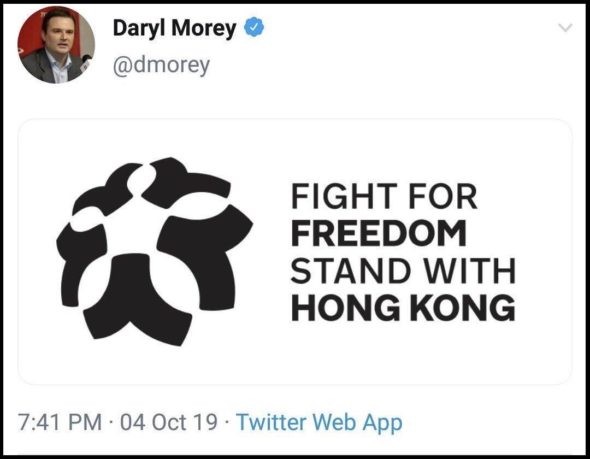 [Sneaker brand Li Ning and Shanghai Pudong Development Bank Card Center are also both “pausing” their relationships with the Rockets, the NY Times reported.] Other partnerships between China and the Rockets were also thrown in doubt, leading the NBA and Morey to respond. …

The NBA said it recognized that Morey’s tweet “deeply offended many of our friends and fans in China, which is regrettable.”

“While Daryl has made it clear that his tweet does not represent the Rockets or the NBA, the values of the league support individuals educating themselves and sharing their views on matters important to them,” NBA chief communications officer Mike Bass said in a statement. “We have great respect for the history and culture of China and hope that sports and the NBA can be used as a unifying force to bridge cultural divides and bring people together.”

The NBA said that Morey’s views “have deeply offended many of our friends and fans in China, which is regrettable.” The Chinese-language version was even more fawning, saying that the league is “extremely disappointed” in the GM’s “inappropriate” tweet that “severely hurt the feelings of Chinese fans.”

[After deleting his initial tweet that “offended” China], Morey tweeted on Sunday,

“I did not intend my tweet to cause any offense to Rockets fans and friends of mine in China. I was merely voicing one thought, based on one interpretation, of one complicated event. I have had a lot of opportunity since that tweet to hear and consider other perspectives.

I have always appreciated the significant support our Chinese fans and sponsors have provided and I would hope that those who are upset will know that offending or misunderstanding them was not my intention. My tweets are my own and in no way represent the Rockets or the NBA.”

There is no team in American professional sports as closely linked with China as the Rockets.

Yao Ming, the best player in Chinese basketball history, spent his entire NBA career in Houston, and the Rockets have been the biggest team in China ever since.

The Rockets have worn special uniforms emblazoned with Chinese characters, and their star player James Harden, the 2018 NBA MVP, regularly visits to promote his Adidas sneakers during the summer.

Harden apologized to the Communist country:

“We apologize,” said Harden, who has traveled to China in the past to promote his Adidas sneakers. “We love China. We love playing there. They show us the most support and love. We appreciate them as a fan base. We love everything they’re about. We appreciate their support they give us, individually and as an organization.”

The Wall Street Journal reported: The ferocious response to Mr. Morey’s tweet and the NBA’s response coincided with the league’s top executives descending on China for preseason games in Shanghai and Shenzhen this week. LeBron James and the Los Angeles Lakers are scheduled to play the Brooklyn Nets, a team owned by Joseph Tsai, the billionaire co-founder of Chinese e-commerce giant Alibaba. Mr. Tsai wrote on Facebook: “The hurt that this incident [Morey tweeting support for freedom in Hong Kong] has caused will take a long time to repair.”

The rapidly unfolding series of events over the weekend pits democratic ideals against the influence of foreign money in a high-profile example of the difficulties American companies encounter when dealing with businesses in authoritarian China.

Iain Levine, a professor of international and public affairs who teaches “Human Rights Research and Reporting” at Columbia University’s School of International and Public Affairs wrote,

“This is beyond weak. It’s deeply unprincipled and cowardly and indicates that it cares nothing for democracy and human rights and everything for the growing Chinese market for basketball.”

“For me, it’s sending a message that says that it prioritizes its commercial relationship with the Chinese Basketball Association over the rights and dignity of the people of Hong Kong,” Levine said. “And more broadly of others in China, the Uighur and others who are suffering from the most repressive time in China in decades.”

Compiled from The Washington Examiner, The Wall Street Journal and the New York Post on October 7, 2019.

2. For CHINA:
a) list the who, what, where and when of the news item
b) What did China’s consulate in Houston ask the Rockets to do?
c) How did the team respond to the Communist government’s request?
d) How did the NBA respond to China’s outrage?
e) Tom Scocca writes at Slate:

What are you going to do, after all, turn your back on 1.4 billion people? Or 1.399 billion, if you don’t count the 1 million [Muslim] Uighurs reportedly held in prison camps where their culture is trained out of them by force (in a territory where the NBA established a training camp)?

Yes. That is what to do. Especially for the NBA, whose relationship with China is chiefly monetary. NBA China is reportedly worth $4 billion. That’s a lot of money to walk away from over one tweet. And that’s exactly why the NBA should walk away now.

China has already played its hand. If Hong Kong is nonnegotiable, there’s nothing to discuss. The subject will become more sensitive, not less, if the Hong Kong police move from tear gas and rubber bullets to the routine use of live ammunition, or if the People’s Liberation Army moves in. Would the NBA muzzle its employees then? Would the players and staff of a globally prominent American company censor their own feelings to protect the Chinese market? Why not take the stand before it gets to that?

Do you agree or disagree with Mr. Scocca? Explain your answer.

f) Should fans call on the NBA and every team and player to cut their ties with the Chinese Basketball Association and Chinese businesses unless they end their blacklist of the Houston Rockets? Explain your answer.

g) Should China be surprised that an American would stand up for freedom? Explain your answer.