Posted on November 18, 2020 in Wednesday's Example of Media Bias 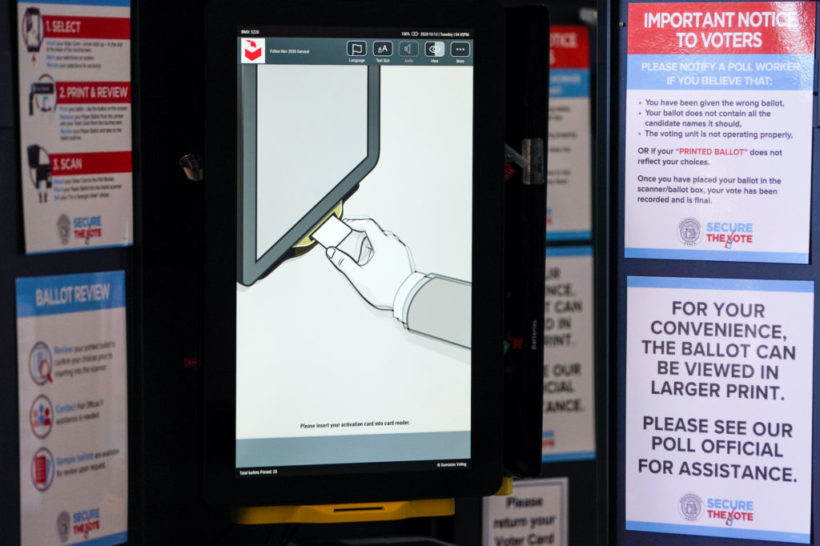 Over the weekend, the Associated Press seemed to dismiss Trump campaign allegations of election tampering…[when it reported on] statements from officials of “no widespread fraud in the 2020 election,” without reporting specific concerns Trump campaign lawyers Sidney Powell and Rudy Giuliani say they are working to reveal and substantiate.

The AP added, “many of the lawsuits have been thrown out and none has included any evidence that the outcome might be reversed.”

Countering the claim, President Trump tweeted, “Many of the court cases being filed all over the Country are not ours, but rather those of people that have seen horrible abuses. Our big cases showing the unconstitutionality of the 2020 Election, & the outrage of things that were done to change the outcome, will soon be filed!”

In its story, the Associated Press claimed that Trump renewed “groundless attacks on an election technology firm, Dominion Voting Systems, without evidence of any serious irregularities.” But evidence is filed during a legal proceeding, not before.

The AP has yet to report allegations made by Trump’s legal team about signs of major election interference even though during Trump’s presidency, the news service regularly repeated unproven allegations by Democratic Reps. Adam Schiff and Jerry Nadler who claimed to have evidence supporting [impeachment of Trump that] they never produced.

“This is a massive election fraud, and I’m very concerned it involved not only Dominion and its Smartmatic software, but that the software essentially was used by other elections machines also. It’s the software that was the problem. Even their own manual explains how votes can be wiped away. It’s like drag and drop Trump votes to a separate folder and then delete that folder.”

The system is used in states with contested elections. … Powell says she is able to prove her accusations and that “the evidence is coming in so fast I can’t even process it all.”

Dominion, whose ownership and business associations lead back to some in Democratic Party leadership, has said it “denies claims about any vote switching or alleged software issues with our voting systems.”

1. What type of bias does this report highlight?

2. What information did the Associated Press leave out of its report when noting statements from officials saying there was “no widespread fraud in the 2020 election?

3. What do the Rome Sentinel’s editors note about the AP’s assertion that President Trump made “groundless attacks on an election technology firm, Dominion Voting Systems, without evidence of any serious irregularities”?

4. All media (CNN, NY Times, Washington Post, LA Times, ABC/NBC/CBS, Associated Press, etc.) as well as the sometimes “conservative news” channel Fox News — in addressing the Trump campaign and Trump voters’ assertions of voter fraud — label it as: baseless, unproven, unverified, groundless, debunked, without evidence, without merit, proven false, etc….
Consider the information under “Resources” and  Trump attorney Sidney Powell’s comments in the two videos.  Why should the Associated Press and all media outlets report on these claims?

…Instead of choosing simple, hand-marked paper ballots that are most resistant to tampering because paper cannot be hacked, many [states] are opting for pricier technology that computer security experts consider almost as risky as earlier discredited electronic systems.

Called ballot-marking devices, the machines have touchscreens for registering voter choice. Unlike touchscreen-only machines, they print out paper records that are scanned by optical readers. South Carolina voters will use them in Saturday’s primary.

The most pricey solution available, they are at least twice as expensive as the hand-marked paper ballot option. They have been vigorously promoted by the three voting equipment vendors that control 88 percent of the U.S. market.

Some of the most popular ballot-marking machines, made by industry leaders Election Systems & Software and Dominion Voting Systems, register votes in bar codes that the human eye cannot decipher. That’s a problem, researchers say: Voters could end up with printouts that accurately spell out the names of the candidates they picked, but, because of a hack, the bar codes do not reflect those choices. Because the bar codes are what’s tabulated, voters would never know that their ballots benefited another candidate. 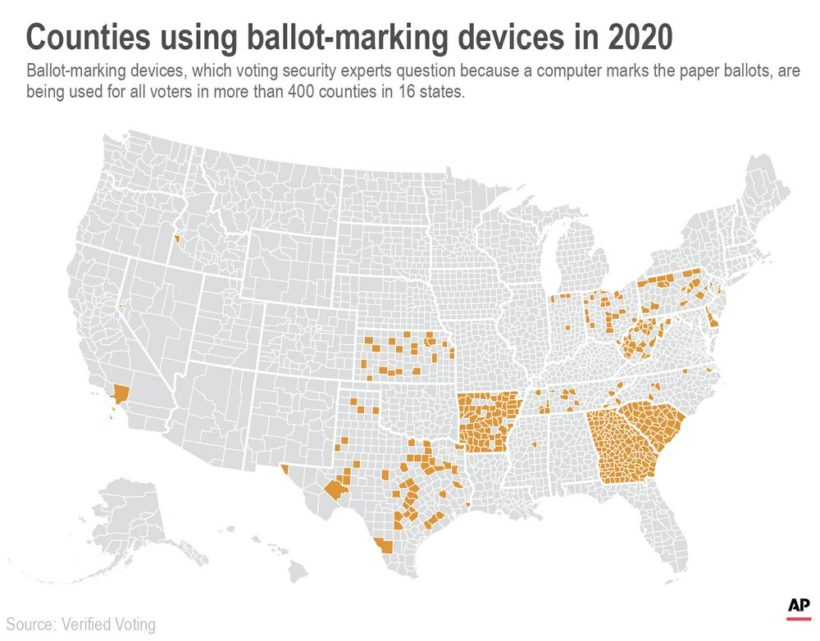 Ballot-marking devices, which voting security experts question because a computer marks the paper ballots, are being used for all voters in more than 400 counties in 16 states. (From a Feb. 23, 2020 Associated Press article)

Concerns with the Dominion voting systems are well-documented:

The Department of Homeland Security’s CISA (Cybersecurity and Infrastructure Security Agency) put out a statement on Nov. 12, 2020 that reads in part:

“The November 3rd election was the most secure in American history. … There is no evidence that any voting system deleted or lost votes, changed votes, or was in any way compromised.”

An unnamed DHS official explained, ”CISA was successful in preventing election interference via a cyberattack on election infrastructure during the presidential election. Election fraud is different than election interference and is beyond the scope of CISA authorities. CISA does not have firsthand information on allegations of voting fraud or investigate such claims, responsibility for which lies with State and local authorities and the Department of Justice. Allegations of voter fraud are being adjudicated through the court system. Taken together, it’s clear that CISA Director Krebs was speaking outside of his lane.”

1. The report highlights bias by story selection, omission and spin.

2. When noting statements from officials saying there was “no widespread fraud in the 2020 election,” the AP left out / omitted the specific concerns with two voting machine companies and the software used in the voting machines that Trump campaign lawyers have detailed.

3. Regarding the AP’s assertion that President Trump made “groundless attacks on an election technology firm, Dominion Voting Systems, without evidence of any serious irregularities,” the Sentinel’s editors note that “evidence is filed during a legal proceeding, not before.”

4. Based on the videos and information under “Resources,” the Associated Press is aware of these prior concerns with Dominion voting machines. The AP published a report on Feb. 28 detailing grave conerns over Dominion and others (see “Resources”).  If proven true, every American: Democrat, Republican, Libertarian, Green Party, Democratic Socialist, Independent…would want this exposed and prosecuted – and call for the entire U.S. election system to be overhauled to ensure accurate and fair elections, free from any fraud. They are allegations that need to be taken seriously. This is not about loving or hating Donald Trump, this is about the integrity of our entire election process. The media needs to stop editorializing and start reporting facts.