Posted on April 14, 2021 in Wednesday's Example of Media Bias 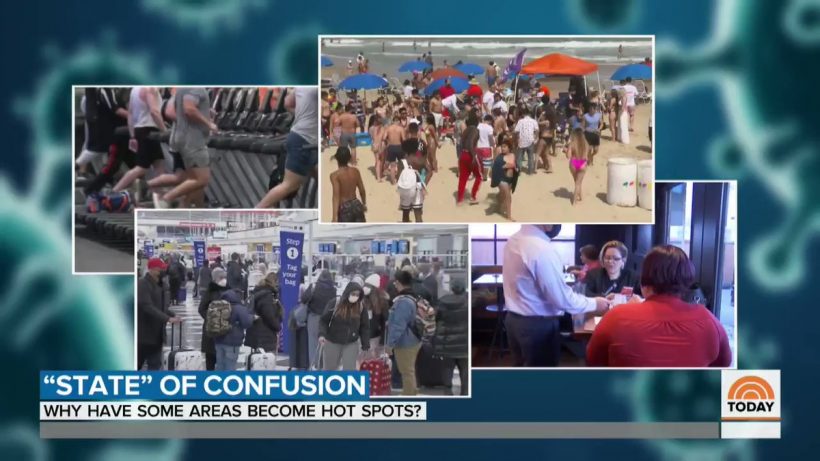 A recent NBC Today Show segment about discrepancies in COVID-19 positivity rates between states began with, “Call it a COVID conundrum.”

The piece sought to explain why “Some states with stricter rules are now seeing surges in COVID-19 cases, while many others that rushed to reopen are experiencing sizable drops.”

According to Today, “The numbers have experts scratching their heads” because many of the Democrat-run states like Michigan, New York, and Pennsylvania are now seeing surges in their COVID-19 numbers while cases in Republican-controlled states, such as Arkansas and Texas, are on the wane.

The segment cites multiple theories that could explain the discrepancies, like differences in testing rates. Alabama’s infection rate has dipped 52% but it’s also “dead last” in the U.S. as far as testing is concerned, with only 56 tests per 100k people. This number pales in comparison to states like Vermont and New York, which are testing 1,000+ people per 100k.

But the segment fails to mention that hospitalization rates in Alabama are also at an all-time low, which would suggest that they’re not missing critical cases simply due to a lack of testing.

The entire point of “fifteen days to slow the spread” was so that hospitals would not be overrun.

Michigan, [which has been under strict lockdown], is now leading all other states in its number of utilized hospital and ICU beds for COVID-19 patients.

[Another fact the Today show ignores]: Alabama also ranks No. 9 in the country for vaccinating its most vulnerable populations – well above states like New York and Michigan. [Every state was given a proportionate number of vaccines according to their population under Trump’s Operation Warp Speed plan, so it wasn’t for a lack of vaccines].   According to NPR, Michigan officials were wrestling “with how to ethically distribute COVID-19 vaccines” back in March, instead of focusing purely on vulnerability as the most important factor.

NBC’s Today show fails to explore the most obvious theory behind why pro-lockdown states are seeing surges while freer states are not:

Maybe lockdowns don’t work as well as intended, or that states with less dense populations do not require the same level of lockdown.

But Today is not interested in discussing that because then they might have to admit that Republican governors had the correct policies when it came to COVID-19. Instead, The Today Show would prefer to explain away the discrepancies by theorizing and twisting data to fit its narrative.

NBC claims southern/Republican states’ low COVID numbers are giving a “false sense of security.”  However, NBC failed to report on the low hospitalization rates in these states as well.  Instead, NBC chose to focus on number of tests being given.  Watch the NBC Today Show segment below:

1. What types of bias does Ella Carroll-Smith’s article highlight?

2. Why do you think the Today show chose to leave relevant / important facts out of the report?

1. Bias by spin —  and omission – NBC left out the number of hospitalizations in the states, as well as the number of vaccines that had been distributed.