Posted on November 4, 2020 in Wednesday's Example of Media Bias 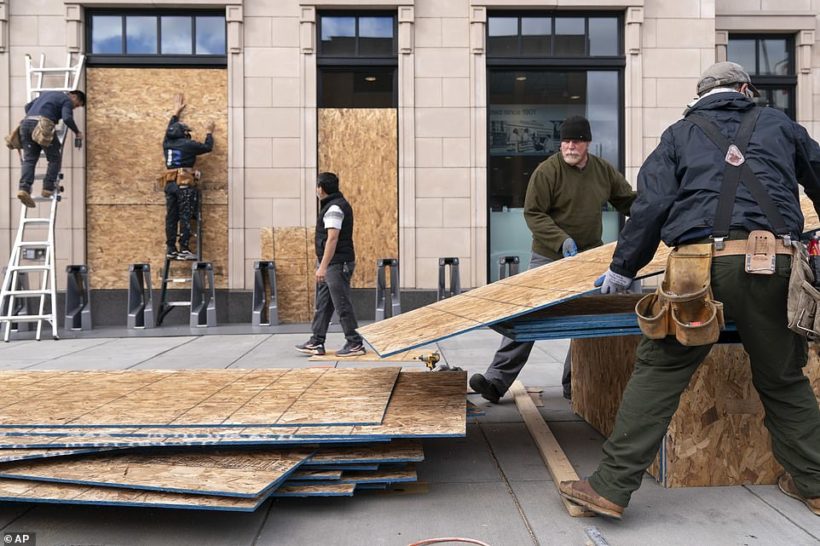 Washington DC: Ahead of the presidential election, workers board up a Walgreens on U Street NW on Friday. Cities across the country are boarding up in anticipating of violence on and after Election Day.

With the streets of the nation’s capital being turned into “fortresses of plywood” (as coined by CBS Homeland Security correspondent Jeff Pegues on Monday), the broadcast networks [don’t] say who they were protecting their businesses from.

Any honest observer understood just who those businesses feared.

“Across the country, major cities are preparing for potential violence after the election, from New York to Philadelphia to Los Angeles,” reported NBC correspondent Gabe Gutierrez.

Now, those cities were definitely not known for their enclaves of rioting Trump supporters (they don’t exist).

Business owners knew there was a chance that the radicals of Antifa and Black Lives Matter would take to the streets and [ransack, loot, burn or destroy their property] following the election.

“Even the White House plans to install a non-scalable fence. In Kenosha, downtown businesses have been boarded up for months,” Gutierrez added, failing to note why Kenosha had been stuck like that for so long.

But at least that was more than what ABC chief White House correspondent Jonathan Karl told his viewers. [Ignoring the boarding up of multiple businesses in Washington, DC, he only reported on] the White House’s construction of a new steel fence. [He put a negative spin on the protective barriers, saying],

“President Trump has invited 400 guests to the White House tomorrow to watch election returns. Today, barriers are going up, walling off the complex to the world outside.”

(The White House has good reason to prepare. Following the conclusion of the Republican National Convention, which was held in August at the White House, as they returned to their hotels, multiple guests were harrassed, screamed at, menaced and spit upon by angry mobs of BLM and Antifa “protesters.”  See Senator Rand Paul’s experience, which was dismissed by the media.  Shouldn’t the media be on the side of law and order, and innocent civilians?)

On CBS, anchor Norah O’Donnell continued to keep the threat to the public as obfuscated as she could.

“Today, new steel fencing went up around the White House complex. Security is being tightened all over the country over concerns of unrest after the election,” she said.

Nora, Trump supporters were not going to attack the White House or burn down stores and homes. That’s the extremist left.

At the top of his report, CBS’s Jeffrey Pegues noted that “in New York City, the nation’s largest police department is putting businesses on alert as stores there and around the country board up as a precaution.” Again, not a place that saw Trump supporters riot and loot. 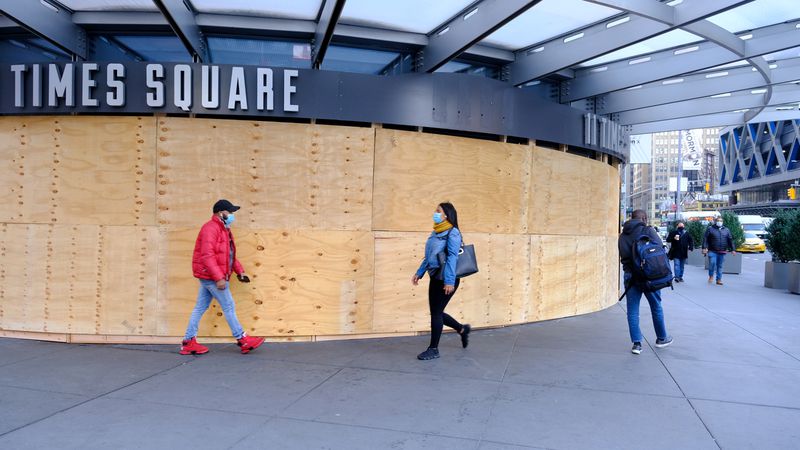 He went on to speak with an unnamed Homeland Security official who warned of the “half-a-dozen protests” that could swarm D.C.

“We are seeing a lot of these,” he told O’Donnell as he toured a D.C. street, “fortresses of plywood here around D.C. as a precaution. Because we’re being told there are no specific threats of violence. Even so, businesses around here aren’t taking any chances after a summer of unrest.”

What groups were behind the “summer of unrest,” Jeff? [Isn’t it your job as CBS Homeland Security correspondent to report the facts to your viewers]?

1. What type of bias do you think the “Big 3” (ABC, CBS, NBC) display in their reporting on businesses across the country preparing for potential riots?

Nora O’Donnell says “Security is being tightened all over the country over concerns of unrest after the election,” implying that there will be unrest no matter who wins (that Biden supporters or Trump supporters would riot if their candidate does not win)

NPR reported Nov. 2:   “From coast to coast, cities are preparing for possible protests, civil unrest and violence, regardless of the election’s outcome. … Groups on all sides of the political spectrum are planning election night demonstrations, and the very real possibility that the results might not be known for days or weeks after Election Day could escalate tensions.”

Antifa and some BLM protesters were responsible for the ransacking, looting, burning or destruction of businesses in multiple cities across the country over the summer (and still ongoing in several cities).

2. Why do you think the ABC reporters chose not to report on businesses across the country boarding up in preparation for riots?

3. Why do you think CBS and NBC reported on the protective preparations, but did not report on Antifa being behind the expected rioting?

4. a) Do you think Trump supporters will smash windows, loot and destroy businesses if Biden wins? Explain your answer.
b) Do you think the average Biden voter will smash windows, loot and destroy businesses if Trump wins? Explain your answer.
c) Why do you think the media won’t report on Antifa as an organized group whose goal is chaos and anarchy and instead cover up this leftist-extremist violence?
d) What responsibility do you think mayors of the cities where riots are expected have to prevent Antifa from wrecking havoc in their cities? – and to arrest and prosecute them to the fullest extent of the law?
e) What responsiblity do you think the media has to report on Antifa’s ongoing destructive violence and the organization’s true goals?
f) Ask a parent: Do you think the assertion that rioting occurs/is not stopped in Democrat-controlled cities is accurate? Los Angeles, New York, Portland, Seattle, Chicago, Philadelphia, Kenosha, Rochester… Please explain your answer.