Posted on September 1, 2020 in Wednesday's Example of Media Bias 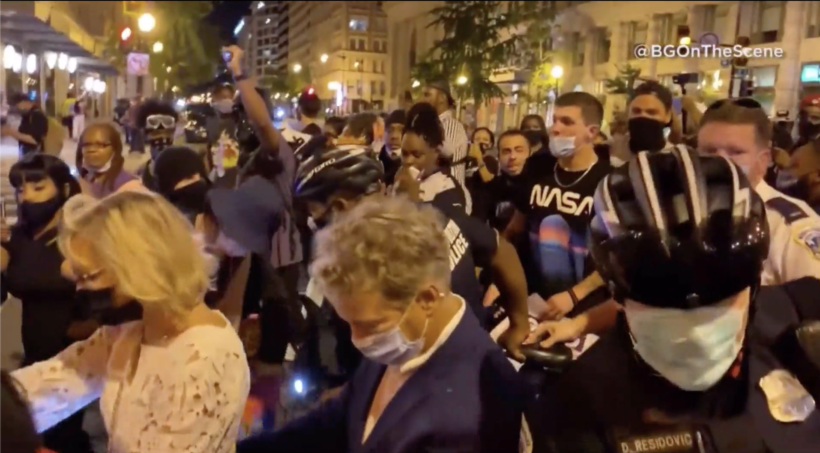 Senator Rand Paul, his wife and two family friends were attempting to return to their hotel following the last night of the Republican National Convention in Washington, DC on Thursday, Aug. 27.

Senator Paul and the three women were swarmed by BLM protesters.  Watch the interview with Senator Paul detailing their experience:

And watch a clip as the Senator and his group finally made it back to their hotel – after a BLM protester stole one of the women’s shoes and waved it in Sen. Paul’s face, refusing to return it:

Read the first 3 paragraphs of the AP article:

(Aug. 28, by Deb Riechmann and Dino Hazel, AP) — WASHINGTON — Sen. Rand Paul, who was surrounded by screaming protesters when he and his wife left President Donald Trump’s Republican National Convention speech at the White House [on Thursday night], claimed without evidence on Friday that he had been “attacked by an angry mob” of the type that would be unleashed in Joe Biden’s America.

A video of the encounter with the protesters, who were yelling for Paul to say Breonna Taylor’s name, shows no attack on Paul, only a police officer who was jostled while carrying a bicycle and then stumbled into the Kentucky senator’s shoulder.

Police and other security personnel formed a cordon around Paul and his wife as they left the White House shortly after midnight to walk a few blocks to their hotel, and the couple didn’t appear to come into physical contact with the protesters and were unharmed. …

The headline from a separate Associated Press story by Ashraf Khalil on Aug. 28 reads:

A news agency is an organization of journalists established to supply (sell) news reports to news organizations from around the world.  It is also referred to as a wire service, newswire or news service.

Since its founding in 1846, the Associated Press has been the first to report many of history’s most important moments.  AP’s reporting, photography, audio and video are published and broadcast by the world’s leading newspapers, TV channels, apps, radio stations, websites and magazines – in fact, over half the world’s population sees AP news content on any given day.

1. What type of bias does the AP display in the way it reported on Senator Rand Paul and three women being swarmed by BLM protesters as they tried to return to their hotel after the last night of the Republican National Convention?

2. Define editorialize.  Why do you think the AP chose to editorialize in their headline (as well as in their report)?

3. The Associated Press website describes the agency as follows:

“The Associated Press is an independent global news organization dedicated to factual reporting. Founded in 1846, AP today remains the most trusted source of fast, accurate, unbiased news in all formats and the essential provider of the technology and services vital to the news business.”

All major media outlets use AP stories – and oftentimes the same AP headline. How might these headlines/news reports affect the way Amerians, who trust the AP, view what happened to Sen. Paul, his wife and friends – especially the people who only read the AP report and did not see the video clip or hear Sen. Paul describe the event?

CHALLENGE QUESTIONS:  In addition to Sen. Paul’s experience, multiple attendees of the final night of the RNC convention reported being followed as they exited, screamed at by protesters who used profanities and made vulgar gestures in their faces, threatened and some spit upon. Videos of many of these attacks can be found on social media. They include:

The big picture is that these protesters will threaten, menace, harass anyone who does not publicly submit to their demands.  They are bullying and threatening citizens into compliance. As Sen. Paul’s wife Kelley noted, “…they want to silence or intimidate anyone who disagrees or wants meaningful dialogue.”

a)  The stories listed above were not widely reported by the national media. CNN, ABC, NBC, CBS, The New York Times, The Washington Post, etc. downplayed or ignored these stories. Why do you think this is so?

b)  The First Amendment to the U.S. Constitution states: “Congress shall make no law respecting an establishment of religion, or prohibiting the free exercise thereof; or abridging the freedom of speech, or of the press; or the right of the people peaceably to assemble, and to petition the Government for a redress of grievances.”
Do you think the actions by the BLM protesters is what the framers of the Constitution had in mind? Explain your answer.

c) What type of media reports, if any, do you think would be published had a conservative group treated DNC convention attendees leaving the last night of their convention in the same manner? Explain your answer.

2. Editorialize: to introduce opinion into the reporting of facts.

3. People will think Sen. Paul is exaggerating, or that what happened to him was no big deal.

“If it is possible, as much as depends on you, live peaceably with all men.”
“Depart from evil and do good; seek peace and pursue it.”