Over 4,000 migrants, many children, held in cramped Texas tent facility 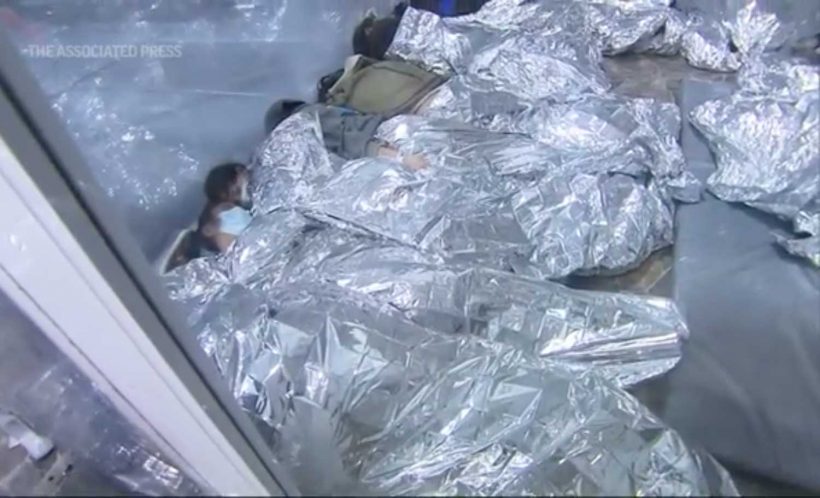 (by Tamar Lapin, New York Post) – The Biden administration’s main border detention facility for migrant children is an overcrowded tent structure currently packed with more than 4,000 people, despite a 250 person capacity, it was revealed Tuesday.

The Biden administration for the first time allowed reporters [to see the site – but only reporters] from the Associated Press and CBS were permitted to tour the crammed US Customs and Border Protection facility in Donna, Texas.

The structure has a capacity of 250 — but the AP reported that more than 4,100 migrants, most of them unaccompanied kids, are currently being held there.

The children were being loaded by the hundreds into eight pods about 3,200 square feet in size. Many of the pods had more than 250 kids in them.

The youngest of them (ages 3-9) were kept in a large play pen with mats on the floor for sleeping.

The kids are processed in the tents before being hauled to Department of Health and Human Services shelters and then placed with relatives or sponsors.

Journalists observed the minors being processed on Tuesday. The kids were first taken to small rooms inside the tents for health assessments, including checks for lice, scabies, fever and other ailments.

No COVID-19 test was administered unless a child showed symptoms of the virus.

The kids also underwent psychological tests, with nurse practitioners asking if they had any suicidal thoughts. All shoelaces were removed.

Then, the minors were brought to a large intake room where those 14 and older were fingerprinted and had their photo taken.

They were then taken to a second intake room where they were given notices to appear in immigration court.

Kids who had a contact in the US were allowed to speak with that person on the phone.

Children were given bracelets with a barcode that showed a history of when they had showered and any medical conditions. 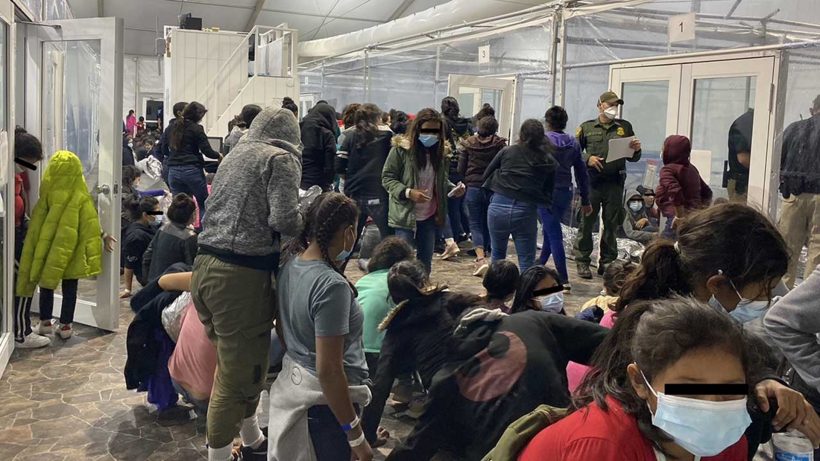 NOTE: Before answering the questions, read the “Background” and watch the video under “Resources.”

1. a) What is the capacity of the US Customs and Border Protection facility in Donna, Texas?
b) How many children are being held in this facility?

2. Where are the youngest unaccompanied children – ages 3-9 – held?

3. a) Where do the unaccompanied children eventually go?
b) What are sponsors?

4. What types of individual medical conditions were the children examined for?

5. a) The medical histories of the children and potential previous contact with covid positive people are unknown. Were they all given covid tests?
b) Why do you think this is so?
c) In the San Diego facility, it was reported that 10% of children tested positive for covid. (No report on the Donna facility.) What should the Biden administration do about the close contact living conditions of the children housed in the CBP facilities?
d) Have you had to have covid tests for school or to play a sport?

7. a) Which children were fingerprinted and had their photo taken?
b) Why do you think is it important to do this?
c) Some Republicans have suggested that all of those crossing the border should have DNA samples taken. How would this help protect the children? Explain your answer.

Republicans (and some Democrats, especially those in or representing border towns) have asked President Biden to reimplement Trump’s policies that worked to solve the crisis.
What do you think? Should President Biden do so? Explain your answer.

In March 2019, DHS Secretary Kirstjen Nielsen of the Trump administraton said in an interview that human traffickers are using “child recycling rings” to smuggle people across the U.S.-Mexico border illegally.

Nielsen told Fox News that the practice essentially uses the kidnapping and passing around of children as a way to skirt U.S. immigration laws.

When an adult enters the country with a kidnapped child, it allows them to lie and claim they are a family, and use immigration laws that are lenient towards families to get released by authorities into the interior of the United States.

“The smugglers are more active than ever before at advertising how to come into this country with a child. We’ve broken up so-called ‘child recycling rings,’ if you can believe it, in the last couple months, which is where smugglers kidnap a child, they give it to an adult to cross the border, [and they] present themselves as a family.

“Once they get in, because, as you know, we can only hold families for 20 days, they send the child back, and bring the child back with another family—another fake family, [meaning] another adult,” Nielsen told Fox News.

Read Secretary Nielsen’s March 29, 2019 statement at the DHS website about the practice of using children to gain entry.

Nielsen says that flaws in U.S. immigration laws have allowed and encouraged this practice.

“This goes well beyond politics. We must come together to find a way to tackle the crisis and reduce the flows so children are not put at risk. Any system that encourages a parent to send their child alone on this terrible journey—where they are exploited, pawned, and recycled—is completely broken,” Nielsen added.

Nielsen travelled to Honduras on March 27 [2019] to meet with government officials from Honduras, Guatemala, and El Salvador, and signed a historic Memorandum of Cooperation multi-country agreement on border security cooperation.  (from an April 3, 2019 NTD News article)

(Congress still has not acted to change immigration law to protect children.)

Within the groups, were 93 unaccompanied children alien (UAC). So far this fiscal year #RGV has encountered over 18K UACs.

Two child predators were arrested by #USBP within 3 hrs after they illegally entered the U.S.

With the border patrol agents overwhelmed – and taken off regular duties to take care of the unaccompanied children, how many criminals have not been apprehended?

NOTE: U.S. Customs and Border Protection website states: “Border Patrol Agents are focused 24/7 on securing our international land borders and coastal waters between ports of entry.” There is no mention of caring for children. It is not the role of the agents.

Watch a video from the Associated Press (AP):