Dem border town mayor: “It is a Biden border crisis” 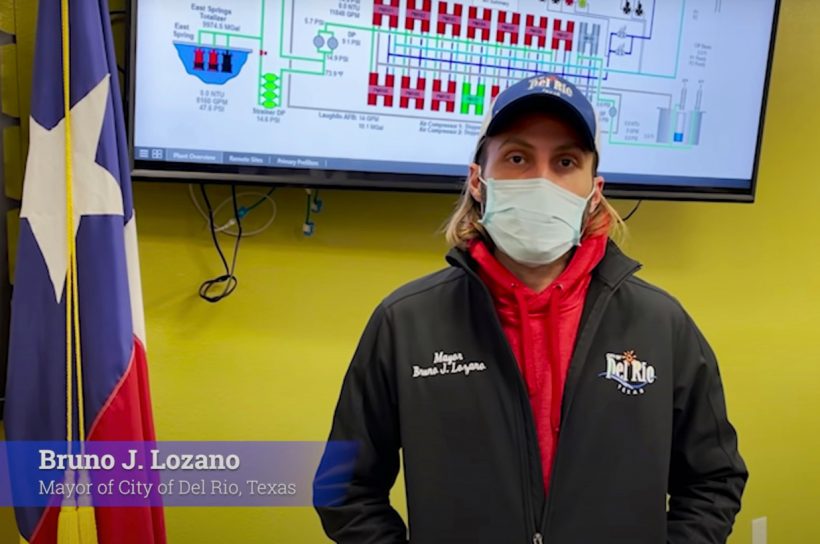 (by Gabrielle Fonrouge, New York Post) RIO GRANDE VALLEY, Texas — The Democratic mayor of a southern border town says he’s incensed over the Biden administration’s handling of the immigration crisis in his backyard — and he’s “pleading” with Washington to do more to stem the stream of migrants pouring into his small city.

“You have a breach on national security levels that have never before been seen in modern history and you’re not even batting an eye about it, you’re not even calling it a ‘crisis‘, you’re calling it a quote unquote challenge,” Mayor Bruno Lozano, a Democrat who represents Del Rio, Texas, told The Post on Sunday.

Lozano, 38, represents the small locale of just over 35,000 residents and has been trying to get President Biden’s attention since February.

Just before a historic winter storm that left millions without power and killed 57 hit the state, he sent the president a video asking him not to send migrants to the community because he didn’t have the resources necessary.

“Mr. President my name is Bruno Lozano, mayor of the city of Del Rio, Texas, and I am pleading and requesting with you to please put a halt to any measures regarding the release of immigrants awaiting court dates into the city of Del Rio and surrounding areas,” Lozano says in a Feb. 20 video as footage of empty store shelves and grocery store lines plays in the background.

“We do not have the resources available to house and accommodate these migrants within our community… If you do send these individuals into our community, we will be forced to make a decision to leave them without resources under these dire circumstances. I’m asking to please stop, please make another plan for this federal issue.”

Despite best efforts, Lozano said the request “fell on deaf ears” and over a month later, the only thing that’s changed is the number of migrants streaming into his small community, which is now currently around 150 a day.

“I’m not trying to demonize the humanitarian aspect by any means but my responsibility is to the city of Del Rio and the residents of Del Rio, Texas, my responsibilities are to the American people that got me elected,” Lozano explained.

[Lozano says] he has to use local budget dollars for an issue he calls a federal problem that’s been dumped in the laps of small communities all along the border.

“It’s not even in our budget. Every line item is accounted for in municipal government, we’re very fine tuned in budget. It’s not appropriate,” Lozano [said].

“It just blows my mind how disconnected from reality [they are] or maybe they do know, maybe they just don’t want to call a spade a spade, you know, because it’s uncomfortable.”

…Lozano said each day, migrants are brought to the Val Verde Border Humanitarian Coalition where they have access to services, before boarding flights and buses out of town. But sometimes, they can’t get tickets and the town needs to find a place for them to sleep.

“That’s when the logistical nightmare begins, where are they going to sleep for the night? That’s the number I worry about each day,” Lozano said, adding he uses a basketball court as a makeshift shelter.

“Sometimes migrants get released after hours and there’s simply nowhere to put them. I can’t use the civic center because I’m using that for COVID vaccines.” 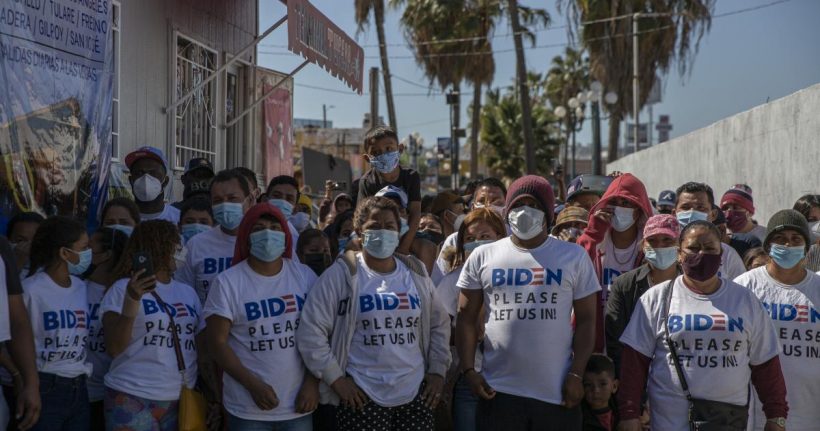 Lozano says the influx is a side effect of Biden’s relaxed immigration policies.

“It is very selective on who they deport now and let’s be real, the Biden administration sent that message that you know ‘we’re going to reverse this, we’re going to do that’ and sure enough within days, within days, it started happening again.”

“It was completely predictable,” Lozano added — but when he tries to explain what’s happening on the ground to senators, he said “they’re shocked.”

“I’m calling them out, I’m so frustrated as a border town mayor about all of this.”

1. What problem does Democratic Mayor Bruno Lozano of Texas border town Del Rio have with President Biden’s label for the huge surge of illegal immigrants coming across the border since Biden implemented his own border policies?

2. a) What did Mayor Lozano ask President Biden to do in a video he sent to the White House last month? For what reason did he make this request?
b) What help did Lozano receive?

3. For what reason was the huge surge of illegal immigrants entering the U.S. completely predictable, according to Mayor Lozano?

4. a) Define condone as used by Mayor Lozano.
b) What is the Biden administration condoning, according to Mayor Lozano?

5. Read about an Arizona border town under “Background” below. What is your reaction to Mayor Riggs’ concerns?

6. Watch the videos of Texas Mayor Bruno Lozano and Arizona Mayor Chris Riggs under “Resources” below. Both mayors have expressed great concern over the lack of covid testing being conducted before releasing the migrants into their communities.
a) How confidant are you in the Biden administration’s ability to handle the threat of covid spread by untested migrants?
b) What is your opinion of the double standard between the covid testing and protocols President Biden has for Americans (students, employees, federal offices, etc.) and the lack of covid policies his administration has for those crossing the border illegally?

7. When President Trump came into office, there was a crisis at the border. President Trump implemented new policies to get the governments of Mexico – and Guatemala, Honduras and El Salvador to work with the U.S. to stem the tide of their citizens attempting to cross the border into the U.S.:

From RT: President Biden has not indicated that he plans to revive any Trump-era [border] controls, but that hasn’t stopped him looking for other fixes. Instead of reinstating Trump’s “Remain in Mexico” policy that he ended upon taking office, he sent envoys to Mexico and Guatemala on Monday to ask their governments to staunch the flow of migrants. Two weeks earlier, he pleaded privately with Mexican President Andres Manuel Lopez Obrador for help.
Back in the US, other “fixes” include an $86 million plan to house 1,200 migrant family members in hotels near the border, and a proposal to fly migrants to states near the Canadian border for processing.

President Biden this week sent National Security Council adviser Roberta Jacobson (and others) to Mexico to meet with government officials. Press Secretary Jen Psaki said when questioned, that “part of our objective as Roberta Jacobson,…conveyed when she was in here just a few weeks ago, was that we need to work in partnership with these countries to address the root causes in their countries to convey clearly and systematically that this is not the time to travel.”
(Jacobson mistakenly told migrants in Spanish during a briefing that the Southern border was OPEN until an aide handed her a note; Jacobson then corrected her statement to say, “The border is CLOSED.”)

How effective do you think the meetings between Biden administration officials and our southern neighbors will be? Explain your answer.

Gila Bend, Arizona, is a town of less than 2,000 people, located halfway between the state capital of Phoenix and Sonoyta, a village on the Mexican side of the border. Mayor Chris Riggs told Fox News on Monday that for the past two weeks, Border Patrol agents have been dropping off busloads of illegal immigrants in Gila Bend, with no further instruction from the government on what to do with them.

“Border Patrol let us know that they were going to be dropping migrants that had been detained for 72 hours in our town, which we really didn’t understand because we have nothing here,” Riggs told FOX Business. He said that he’s been left “completely in the dark” by the Biden administration on what to do with the new arrivals, and has not received any funding to shelter, house or feed the migrants.

Announcing that he would declare a state of emergency in the hope of getting some federal aid, Riggs told Fox that to test two busloads of migrants for Covid-19 every week for a year would cost his town $600,000. In addition to the influx by bus, he said that 20 or so migrants are arriving every day on foot, and violent crime has increased in Gila Bend as a result.

Riggs has appeared on TV multiple times in recent weeks to highlight the same problem. “Quite frankly, it’s going to cost us tens of thousands of dollars a year to be able just to provide them with a bottle of water and a sandwich when they get dropped off,” he told Fox last week. …

Riggs is just the mayor of one small town, but his story illustrates a wider problem along the US’ 2,000-mile border with Mexico.

Upon taking office, President Joe Biden immediately scrapped nearly all of Donald Trump’s tough border policies, including a rule requiring migrants to Remain in Mexico until their asylum claims could be processed and a coronavirus-related regulation turning all migrants back at the border. In addition, Biden reinstated the Obama-era policy of “Catch and Release,” whereby apprehended migrants are set free into the US on the condition that they show up for a court hearing at a later date. With wait times of around two years, few do. …

The result is a staggering increase in illegal border crossings. Federal agents apprehended more than 100,000 border-crossers in February, the highest figure for that month since 2006. Crossings this year are on track to hit a 20-year high, and a record 15,500 unaccompanied minors are currently being held in Customs and Border Protection facilities, the same facilities vocally condemned by Biden during the Trump years.

Conservatives have slammed Biden for creating a “national disaster” and allowing “a mass incursion into the country by people who should not be here,” in the words of Trump, while some Democrats have pressed Biden to end the detention of migrants in deplorable conditions. Under pressure from both sides, bussing migrants to towns like Gila Bend is apparently a quick-fix solution to alleviate pressure at the border. (excerpted from a March 23 article at RT .com)