Republicans push back against vaccine passports 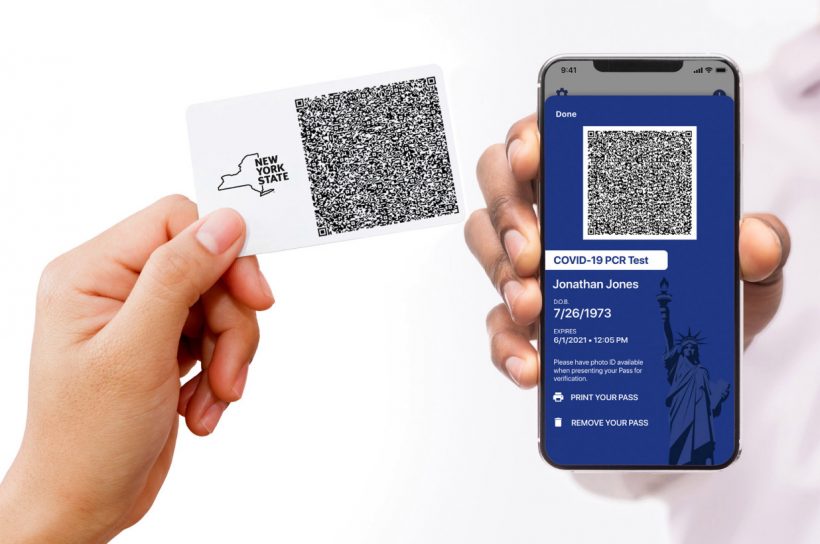 NOTE: “Show me your papers,” or “Your papers, please” is an expression associated with authoritarian police states (communists running the Soviet Union or Nazi officials in countries under German control during WWII) in which they would demand identification from citizens during random stops or at checkpoints. On trains, buses, in restaurants or businesses, or on the street. Those without the acceptable government papers were arrested and imprisoned. Wikipedia reports: “Your papers, please” is a cultural metaphor for life in a police state.

(Compiled from NY Post and OAN News) — Democrats are getting push-back from Republicans over their calls to require Americans to use coronavirus passports. President  Biden is reportedly working with tech companies to create an app showing proof of vaccination.

If the “passports” were used on a national scale, businesses would require Americans to show their passports to be able to use their services. New York became the first state to enforce such a rule* using IBM’s Excelsior Pass app, which shows businesses a user’s personalized QR code.

However, several Republicans are pushing back against the idea and are saying it infringes on Americans’ individual freedoms. Critics are lambasting Democrats who are promoting vaccine passports while arguing it shows their hypocrisy.

House Republican Whip Steve Scalise said he finds it strange that Democrats are quick to oppose and vilify voter ID laws yet they support Americans having to show IDs when going about their daily lives.

“Considering that Democrats want to require vaccine IDs for people to conduct their basic daily activities, they now have zero grounds to object to voter ID laws,”  Scalise said in an interview.

“If under Democrat logic, you should need an ID to enter even a grocery store, surely there wouldn’t be an objection to showing an ID to legally vote.”

Additionally, Ohio Rep. Jim Jordan took to Twitter to condemn the Biden administration for supporting the idea of showing vaccination passports. He tweeted:

–Considering a “vaccination passport” for Americans.

–But doesn’t seem to care about passports when it comes to illegal migrants crossing the southern border.

“…We must make every effort to keep America from becoming a ‘show your papers society,'” Cawthorn told Fox News. “The Constitution and our founding principles decry this type of totalitarianism.”

Other Republicans are expressing concerns over privacy issues that could arise from mandating the apps. They believe the ethical problems outweigh the potential benefits of the passports.

In the meantime, Florida Gov. Ron DeSantis is the first GOP lawmaker to take concrete steps against the measures. The Republican said he will take executive action if the federal government and private sector move to impose the passports. DeSantis added, the nation should not have to take such drastic measures as long as health officials can effectively vaccinate Americans.

*New York has already developed its own version called the “Excelsior Pass.” Democratic Gov. Andrew Cuomo’s office says the digital app doesn’t display the user’s health information (but does not say if it is there in the background), and that it will be required to gain entry to large venues like NBA arenas Madison Square Garden and Barclay’s Center. Theaters, businesses and stadiums have also been listed as requiring the vaccine passport for entry. No word on whether restaurants, schools, supermarkets, malls, etc. will make the “vaccine passport” mandatory for entry.

Israel is already using a “green passport” to allow only people who have their vaccines or have recovered from COVID-19 to attend public events, such as concerts.

Compiled from articles at NY Post, OAN News and FoxBusiness. Reprinted here for educational purposes only.

1. Who is President Biden working with to create an app to be used by citizens to show proof of vaccination against covid?

2. What point did each of the following Republicans make about Democratic support for mandatory vaccine “passports” that would prevent those who don’t have one from entering some (and potentially all) businesses (restaurants, retail stores, schools, churches, funeral homes, etc.)?
a) House Minority Whip Steve Scaliese (Louisiana)
b) Rep. Jim Jordan (Ohio)
c) Freshman Rep. Madison Cawthorn (NC)

3. What do you think of the assertions made by each congressman in #2? Explain your answers.
a) House Minority Whip Steve Scaliese (Louisiana)
b) Rep. Jim Jordan (Ohio)
c) Freshman Rep. Madison Cawthorn (NC)

4. a) What point did Republican Florida Gov. Ron DeSantis make about the Democrats’ suggestions/plans for a national vaccine ID?
b) Do you agree with Gov. DeSantis’ assertion? Explain your answer.

5. Should Democratic elected officials who oppose Voter ID laws (that require a citizen to show identification when they go to the polls to vote) oppose vaccine “passports”? Explain your answer.

6. Do you think a national vaccine “passport” is a good idea? Explain your answer.

The country’s first “vaccine passport” is coming to New York.

The program, named the “Excelsior Pass,” is an app that will allow New Yorkers to prove their vaccination status, or recent history of a negative COVID-19 test, in order to gain entry to events and businesses, Governor Cuomo announced in a news release Friday.

“Similar to a mobile airline boarding pass, individuals will be able to either print out their pass or store it on their smartphones using the Excelsior Pass Wallet app,” the news release explains.

“Each Pass will have a secure QR code, which participating businesses and venues can scan using a companion app to verify proof of COVID-19 negative test results or proof of vaccination. An individual’s data is kept secure and confidential at all times.”

Only those who have the app – and proof of having had the vaccine or a negative test on their app – will be permitted entry into certain businesses.

No word yet on whether the Democratic governor and/or legislature will mandate the vaccine “passport” for entry into supermarkets, schools, restaurants, McDonalds, a polling place to vote, etc. (Excerpted and adapted from an article at NY Post)