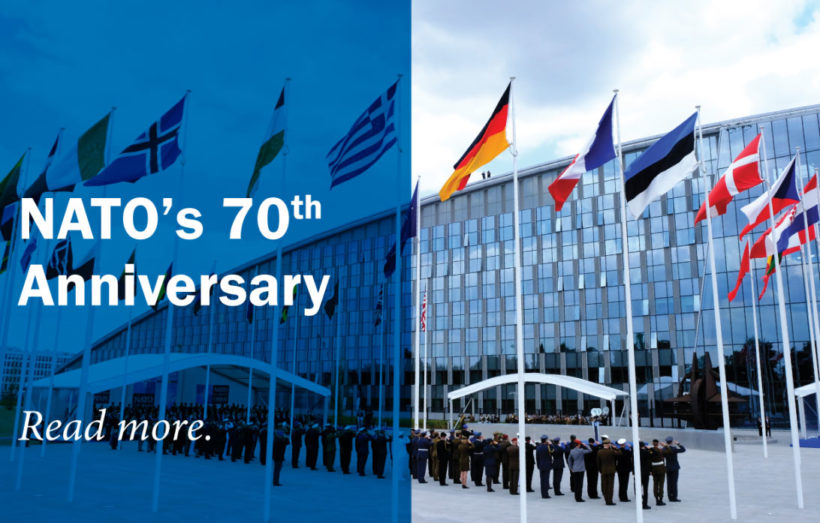 (by Kevin Breuninger and Amanda Macias, CNBC) – President Donald Trump is set to meet with representatives of at least a dozen nations, including Germany, France, Italy and Denmark, at the North Atlantic Treaty Organization’s 70th anniversary meeting in London this week.

[Leaders will discuss “security challenges we face now and in the future.”] Senior Trump administration officials told reporters Friday that the president is expected to stress the ongoing challenges that NATO and the international community face from China and Russia. …

“There are continuing challenges that NATO needs to face, China above all,” one official said in a conference call.

The Trump administration also expects that NATO’s relationship with Russia “will certainly come up,” an official said.

“Russia has shown a consistent disregard for the sovereignty and territorial integrity of its neighbors. Certainly that’s something that will be discussed at the leader summit,” the official said.

The officials sketched a rough outline of Trump’s schedule for meetings with world leaders over the course of the event, which takes place Tuesday and Wednesday, including:

…The NATO meeting is scheduled to take place in London just days after two people were [murdered] near London Bridge [by a terrorist who had been imprisoned for terrorist activities but was released early by a British judge. The terrorist was attending a meeting for rehabilitated terrorists when he committed the terrorist attack. He would have murdered many more if not stopped by several citizens who fought him.]

The Trump administration officials also warned of China’s pursuit of greater global influence and highlighted the risks of 5G technology.  On official said the U.S. will “absolutely” bring up 5G at the NATO meeting.

“This has been a major push of ours. We are absolutely going to insist that our NATO allies use trusted and reliable partners, providers in their 5G networks. This is not something where they want to allow the Chinese Communist Party to be able to siphon off their data or entry into their networks at all. So this is a very, very high priority for us, and the president is going to reiterate that message,” the official said.

President Trump has pointed out that Chinese intellectual property theft has cost the economy billions of dollars in revenue and thousands of jobs and that it threatens national security. [He has vowed to end China’s practice of stealing U.S. companies’ intellectual property.]

China [claims] that it does not engage in intellectual property theft. The issue is central to the repeated attempts between the two economic superpowers to strike a trade deal that will also address the U.S. trade deficit with China and [the communist government’s] forced technology transfers [where the Chinese require U.S. companies doing business in China to hand over their technology information]. The first “phase” of a deal was announced in principle in mid-October, but it has yet to be formalized on paper more than a month later.

Last year, the Pentagon halted sales of Huawei and ZTE mobile phones and modems on U.S. military bases around the world due to potential security risks.

“These devices may pose an unacceptable risk to the department’s personnel and mission,” wrote Pentagon spokesman Lt. Col. Dave Eastburn in a previous statement to CNBC.

Since 2012, the U.S. government has warned against using Huawei equipment and component parts. The company has been effectively banned since that time, and Trump’s executive order in May made the recommendations official.

“U.S. government systems should not include Huawei or ZTE equipment,” a 2012 report by the Permanent Select Committee on Intelligence said. “Similarly, government contractors, particularly those working on contracts for sensitive U.S. system, should exclude ZTE or Huawei equipment from their systems.”

Published by CNBC .com on November 29, 2019. Updated Nov. 30.  Reprinted here for educational purposes only. May not be reproduced on other websites without permission from CNBC.

1. For NATO:
a) list the who, what, where and when of the news item
b) What two countries will President Trump discuss with NATO leaders, as the biggest challenge/threat to NATO?
c) How did a Trump administration official describe the problem with Russia in regards to NATO?
d) What warning/discussion will the president have with NATO leaders regarding China?

2. a) What is NATO?
b) Why was NATO established?
c) What is the role of NATO?
d) Many NATO countries have not been paying their fair share of the budget despite the fact that they receive the same protections from NATO. Since 2006, each member nation is supposed to spend 2 percent of GDP on defense. Yet only the U.S. and two other members did so by 2014, when NATO formally re-committed to the goal. Following President Trump’s insistence that all pay their fair share, eight European countries are now on track to meet it this year: Britain, Poland, Estonia, Latvia, Lithuania, Greece, Bulgaria and Romania. And NATO Secretary General Jens Stoltenberg announced that a majority of NATO’s 29 members now plan to hit the 2 percent threshold by 2024.
One exception is Germany, which will spend just 1.35 percent on defense this year, saying they should hit 2 percent around 2031.
Germany is the largest European country in NATO and has the strongest economy. What do you think of President Trump’s demand that Germany meets their obligation to NATO (as they receive all of the benefits and protection of other member states, while the U.S. contributes the bulk of money and military)? Explain your answer.

The member states of NATO in the order of joining: