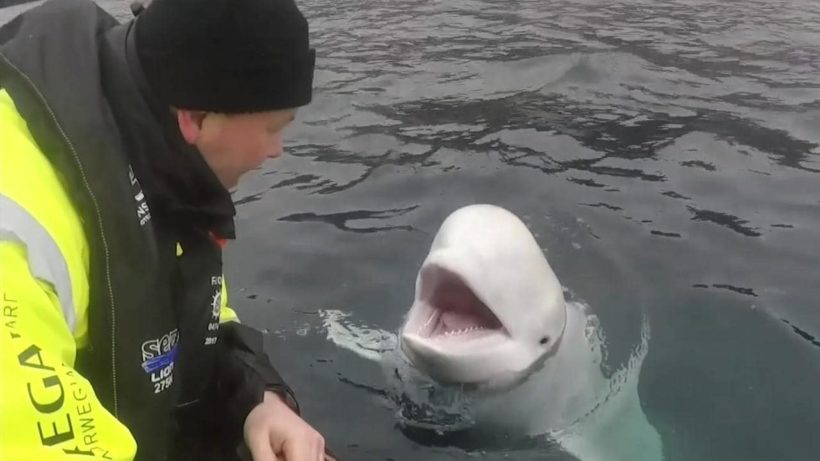 A beluga whale wearing a harness which was spotted by fishermen off Norway's coast could belong to the Russian navy, according to reports.

(CBS News) – Norwegian fishermen and scientists say a white whale wearing a strange harness that harassed boats in the Arctic recently may have been trained by Russia’s military. Russia has previously acknowledged training sea mammals for special operations in the frigid Arctic, where the country has a major military base not far from the territory of key NATO member Norway.

Norwegian state broadcaster NRK reported the unusual behavior of the animal last week and showed video of the beluga whale swimming alongside a fishing vessel and repeatedly nudging it.

“We were going to put out nets when we saw a whale swimming between the boats,” NRK quoted fisherman Joar Hesten as saying. “It came over to us, and as it approached, we saw that it had some sort of harness on it.”

The harness was removed from the animal by a team from the Norwegian Director of Fisheries. Jørgen Ree Wiig, from the agency, sent CBS News images and video of the whale and the harness, which has a logo on it reading, “Equipment of St. Petersburg.” …

There was nothing about the harness to identify it has having any links, specifically, to Russia’s military, and the clip with the logo on it was written in English. But Norwegian scientists suspect a link to the Russian navy, nonetheless.

“If this whale comes from Russia – and there is great reason to believe it – then it is not Russian scientists, but rather the navy that has done this,” Martin Biuw of the Institute of Marine Research in Norway told NRK.

“We know that in Russia they have had domestic whales in captivity and also that some of these have apparently been released,” Audun Rikardsen, a professor of marine biology at the Arctic University of Norway, told NRK according to The Guardian. “Then they often seek out boats.”

But Rikardsen said he’d spoken to Russian scientists and they denied any knowledge of the harnessed whale: “They tell me that most likely is the Russian navy in Murmansk.”

Russia’s military has a history of trying to weaponize whales and other sea mammals.

The Cold War-era Soviet Union had a program to train seals, dolphins and other animals to help detect underwater weapons and alert their military trainers. That program ran until the 1990s officially, but it is unclear whether it has ever been shut down or just changed.

In 2017, Russia’s TV Zvezda, which is owned by the defense ministry in Moscow, aired a report on a Russian navy program to train beluga whales, seals and dolphins for similar purposes.

The UK Guardian said those recent efforts were carried out by a private research institute on behalf of the navy to see if beluga whales could, “guard entrances to naval bases” in the arctic and “assist deepwater divers and if necessary kill any strangers who enter their territory,” according to the Russian TV report.

Just last year a group of Russian scientists was presented an award by the Russian Academy of Sciences for their work on “the use of marine mammals for official purposes.” A note congratulating the scientists on the Academy’s website notes that the use of combat seals might again become relevant for Russia given the increase in “the terrorist threat.”

On Monday, Russia’s state-run Interfax news agency quoted a scientist who appeared to confirm that the country’s military was working with beluga whales. Interfax said Dmitry Glazov, of the A.N. Severtsov Institute of Ecology and Evolution in Moscow, worked with the same kind of animals. Glazov noted that belugas had been deployed by the security services around the Sochi Olympics.

“There is an institute in St. Petersburg that cooperates with the military in studying animals for applied purposes, and its (specialists) work in the Cossack Bay on the Black Sea and in Murmansk,” he said, speculating that one of the animals based at the institute simply “ran away.”

Published at CBSNews .com on April 29. Reprinted here for educational purposes only. May not be reproduced on other websites without permission from CBS News.

2. For NORWAY:
a) list the who, what, where and when of the news item
b) What is known about Russia’s previous programs using marine mammals? Be specific.
c) One news report stated that the harness the beluga was wearing had a spot for a go-pro camera. Multiple experts believe the Russian military trained the whale that approached the fishermen in the Arctic. Russian officials scoffed at the assertions. What motive do you think Russia would have for denying any involvement with the “spy whale”?
d) Ask a parent: do you think the Russian military is involved? Please explain your answer.

Russia and NATO in the Arctic

Over the past three years, President Vladimir Putin has reopened three former Soviet military bases along its vast Arctic coastline as Russia and NATO accuse each other of increasingly bellicose actions along their shared border in the far northern reaches of Europe.

That, Norwegian joint force commander Lt. Gen. Rune Jakobsen told Martin, is “not something you should do to your neighbor.”

In response to Russia’s mounting belligerence in the region — and in the wake of Putin’s unilateral annexation the Crimean Peninsula from Ukraine — NATO held its largest war games to date in Norway last fall.

As Martin reported, Norway shares a 120-mile border with Russia, and its long Arctic coastline includes the closest points on European soil to the base of Russia’s northern fleet, with its naval bases, airfields and nuclear weapons storage sites. The fleet, based on the remote Kola Peninsula, represent Russia’s single greatest concentration of military power, especially submarines.

Martin was given rare access to the Norwegian military planes and ships tasked with monitoring Russia’s actions in the Arctic, including their navy’s newest surveillance vessel which has been equipped with the latest U.S. technology to detect submarines.

If what the Norwegian fishermen found is evidence of a current program by Russia’s military, the Norwegians and their NATO partners might need to start looking for much smaller weapons of war, too — weapons with flippers. (from the CBS News article above)