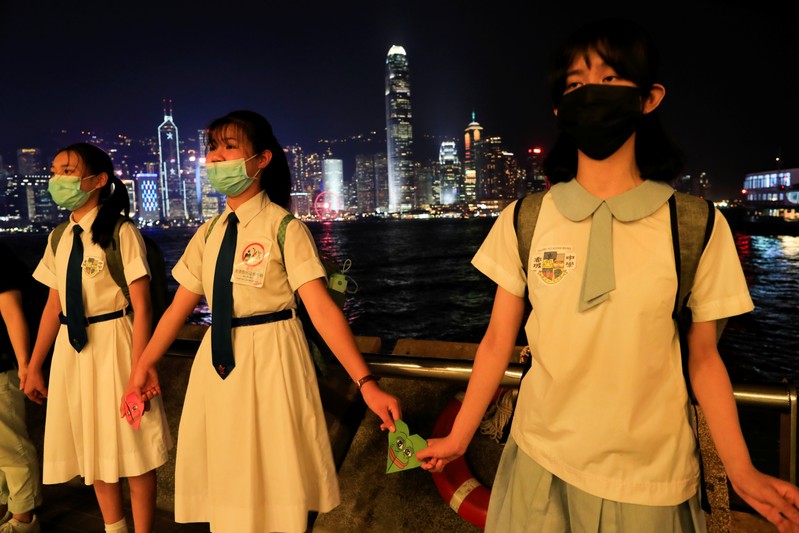 (by Gavin Fernando, News Corp. Australia) – October 1 marks a crucial event for China — the 70th anniversary of the Communist takeover.

Beijing has planned one of the most grand and tightly choreographed military parades in its history, all part of President Xi Jinping’s desire to showcase China as an almighty global superpower of the 21st century.  The aim is to project an image of military might and political power to the rest of the world.

But to the country’s south, millions-strong protests in Hong Kong — sparked by a controversial extradition law — have morphed into a 17-week demonstration against the very image China is trying to project.

In the lead-up to the 70th anniversary of Communist rule in China, fierce clashes broke out between protesters and riot police in Hong Kong this weekend. … [Note that a majority of protesters are young people who do not want to be ruled by a totalitarian state.]

Sunday marked some of the most intense clashes in weeks as police used tear gas, rubber bullets and water cannons at multiple locations for hours during running battles with protesters hurling rocks and petrol bombs. … Police…were seen making multiple arrests throughout the day.

The demonstrations against the Communist Chinese government are no longer confined to Hong Kong.

Over the weekend, global rallies were staged across the world, including Australia, the US and parts of Europe, in solidarity with Hong Kong against the Communist  government of China. The global “anti-totalitarianism” rallies extended to over 60 cities worldwide including Taipei, Tokyo and Kuala Lumpur, representing growing outrage towards the Chinese government. … 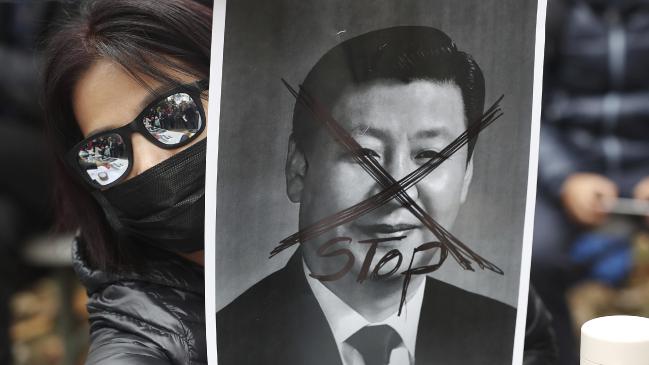 A protester takes part in a demonstration in front of China’s embassy in Warsaw in support of pro democracy protests in Hong Kong on Sunday.

It’s a sign that Hong Kong’s liberties are continuing to be a major headache for China’s Communists, at a pivotal time for its government.

…The government said Sunday that Chief Executive Carrie Lam, Hong Kong’s embattled leader, would lead a delegation of more than 240 people to Beijing to participate in National Day festivities tomorrow.

WHAT WILL HAPPEN ON OCTOBER 1?

Beijing’s military parade will take place in Tiananmen Square in front of officials, select members of the public, and 188 military attaches from 97 countries.

The government claims the focus is on demonstrating a “peace-loving and responsible China,” rather than flex its military muscle.

A total of 15,000 military personnel are said to be taking part, including 59 different elements of the military, while 580 pieces of military equipment and 160 aircraft are to be on display.

China’s defense budget stands at about $168 billion — the second-highest in the world after the United States.

Over the weekend, the Chinese government released a new white paper, entitled China and the World in the New Era, in which it said it was building a “strong military” to match its international standing with the rest of the world.

The document references the fight over Taiwan and disputed territorial claims in the South China Sea.

The parade will also seek to demonstrate China’s determination to maintain control over these issues.

From news .com .au, with wire services.  Reprinted here for educational purposes only. May not be reproduced on other websites without permission from News Corp. Australia.

2. For CHINA:
a) list the who, what, where and when of the news item
b) What is Xi Jinping’s goal for the grandiose military parade China will showcase to the world?
c) What does Beijing claim they will be highlighting to the world through its military 70th anniversary celebration?
d) What effect do you think the Hong Kong protesters calls for freedom will have on the view the world takes of the Communist government of China? Explain your answer.

WHY IS HONG KONG PROTESTING?

The Hong Kong people have been protesting for more than 17 consecutive weeks.

The demonstrations started as a protest against a proposed extradition bill that would see criminal suspects sent to China, but have since become more widely about opposition to the mainland’s growing political influence.

When Hong Kong was handed over from Britain to China in 1997, it was agreed the territory would maintain its unique freedoms and civil liberties for the next 50 years — a deal the protesters believe has not been honoured by Beijing.

The protesters believe China has gradually whittled away liberties since the handover, including by suppressing the “Umbrella Movement” in 2014 and by kidnapping five Hong Kong booksellers.

With the ongoing protests, they are now pushing for the right to elect their own government, for an independent commission to investigate police brutality, and they want the territory’s leader, Carrie Lam — who was hand-picked by the Chinese government — to resign. (from the news .com .au article above)