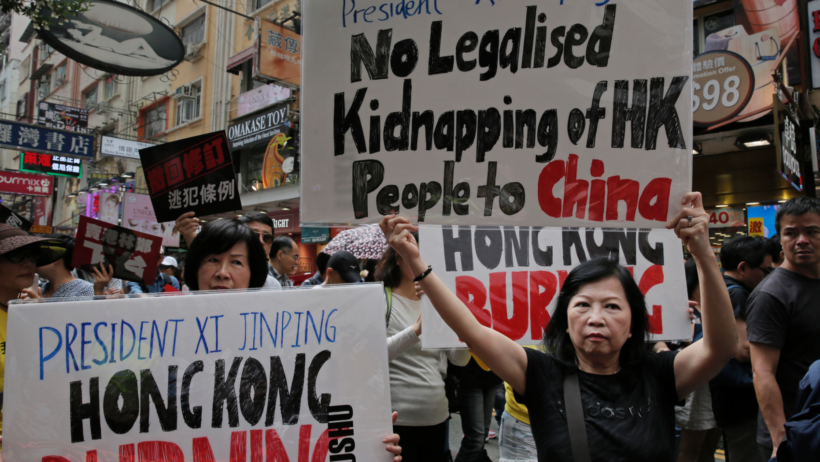 Demonstrators in Hong Kong march during a protest to demand authorities scrap a proposed extradition bill with China, April 28, 2019. (AP)

HONG KONG (AP) — Thousands of protesters marched through downtown Hong Kong on Sunday in opposition to changes to an extradition law widely seen as eroding the territory’s independent legal system.

Many of those taking part carried yellow umbrellas, recalling Hong Kong’s massive 2014 pro-democracy protests, the leaders of whom have been sentenced to up to 16 months in prison.

Hong Kong police said around 22,800 people took part in Sunday’s protest. [Reuters reports “organizers estimated 130,000 turned out – making it one of the largest street protests in the city for several years.”]

Participants carried placards accusing Hong Kong leader Carrie Lam of “selling out” the territory, and called on her to resign. Demonstrators in Hong Kong protested against a bill that would allow citizens to be extradited to China (Photo: Anthony Kwan/Getty)

Revisions to the law would make it easier to send criminal suspects to mainland China, where they could face vague national security charges and unfair trials.

“Hong Kong and China have completely different legal systems,” said marcher Roland Lo, 49. “Creating a loophole that could mean a Hong Kong person gets extradited to China to face prosecution there, that completely destroys the guarantee of human rights and legal protection of one country, two systems.”

Under that system, Hong Kong was guaranteed the right to retain its own social, legal and political systems for 50 years following its handover from British to Chinese rule in 1997.

Another marcher, Amanda Wong, 40, said it was important to exercise those rights while they were under perceived attack.

“We have to come out to march. It doesn’t matter if we can change the situation or not, we just have come out while we still have the chance,” she said.

The amendments expand the scope for the transfer of criminal suspects to China and remove the legislature’s right to scrutinize individual extradition decisions filed by Hong Kong’s chief executive.

Published at AP .com on April 28. Reprinted here for educational purposes only. May not be reproduced on other websites without permission from the Associated Press.

2. For HONG KONG:
a) list the who, what, where and when of the news item
b) Define extradition.
c) How many people protested against the extradition law?
d) What is their major concern with this law?