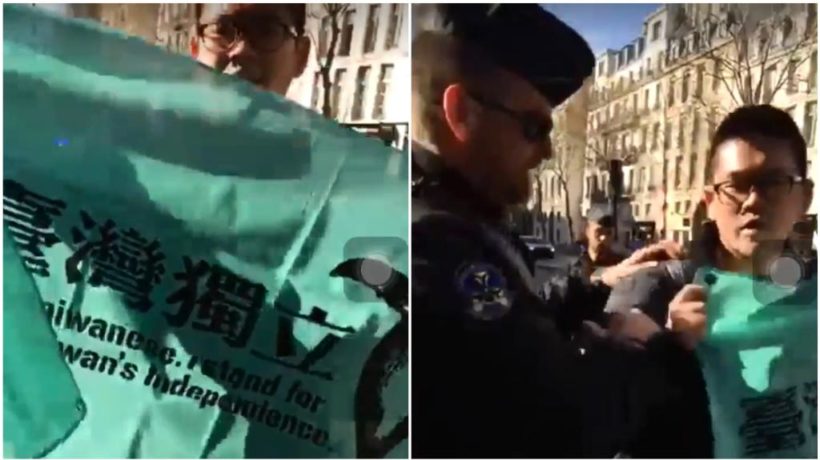 Pho-Han Wu, a Taiwanese student at Sciences Po, was stopped by police when he held up a banner standing for Taiwan independence during Chinese President Xi Jinping's official visit to Paris on March 26.

(by Chloé Lauvergnier, France25) – A Taiwanese student in Paris was stopped by police on March 26 when he attempted to hold up a banner calling for his country’s independence from China during President Xi Jinping’s official visit. A video capturing the moment when an officer wrestles the banner away from him has been viewed more than 130,000 times on Facebook.

As he prepared to protest against China’s tightening control over the island state, Pho-Han Wu, a 22-year-old Sciences Po exchange student from Taiwan, admitted that he had a few reservations. “I hope that the police won’t arrest me,” he said in his March 26 Facebook Live, as he made his way towards the boulevard Saint-Germain, steps away from the university’s campus, where barriers had been set up for President Xi Jinping’s official visit to Paris.

In the live stream, Wu films the various officers stationed around the barriers before handing the phone to a friend, who turns the camera on Wu as several police vehicles drive down the boulevard. Wu unfurls a green banner that says “Taiwan independence” in Chinese and “I am Taiwanese. I stand for Taiwan’s independence” in English. Seconds later, an officer approaches Wu and appears to wrestle the banner away. The camera is jostled around and Wu is heard shouting “Taiwan independence!”

An extract of the scuffle, which Wu shared on his Facebook page publicly a day later, has more than 130,000 views. In his post, Wu wrote that he was detained in a police van and his banner confiscated. The police told him that people are typically allowed to “protest freely” but “high-level officials” had instructed that “no demonstrations in any form” were to be allowed that day, Wu wrote.

Wu said he had “proudly waved” the banner calling for Taiwan’s independence and rejecting China’s goal of “one country, two systems,” in which the island state would [be forced by the communist government to] reunify with Beijing. In his post, he called France an “accomplice of the authoritarian government” for its attempt to “block all opposition voices.”

“I [hoped] that in France, where freedom is a symbol of the republic, I [could] show the international community our determination to defend our democracy,” Wu wrote.

In a Facebook message, Wu told The Observers he had brought the banner with him from Taiwan and that he has received support from people in France and Taiwan.(The text below has been edited for clarity.)

I showed this banner because I knew Xi Jinping would pass by. I wanted to show Xi Jinping and the world the determination of the Taiwanese people to seek and protect our independence, freedom and democracy. When the police officer took away my banner, I shouted my slogans (“Taiwan independence” and “refuse one country, two systems”) really loudly.

They put me against the wall and searched me and my bag. After they finished their search, they put me in their van for more than an hour. Two officers were by my side. At first, they didn’t want me to speak, but after a while, we started chatting. And that’s why I know that there was an order from a “high level” to prevent any type of protest.

They released me after keeping me in their van for more than an hour. They returned my passport and my student card, but they took away my banner! They said they were sorry but they couldn’t return my banner.

I was just standing by the road and wanted to wave my banner. How can this be a threat?

A lot of the comments [on the Facebook video] are crazy, like “Why didn’t the police put a bullet in your head? Why didn’t they punch and kill you? Why didn’t you set yourself on fire?” Most of these comments are left by fake accounts that are organized really well by the Chinese military. They will target and attack certain posts or certain people, it happens quite often in Taiwan. I’m already used to it, but my parents are very worried for my security. …

Michel Tubiana, honorary chairman of the Paris-based Human Rights League, said it is common for law enforcement officials to confiscate protesters’ signs under the pretext that they are “dangerous” or could cause “public disturbances,” but there is almost never any “legal basis.”

The French national police force did not respond to a request for comment.

During his official visit, Xi sought to promote his new economic project, known as the New Silk Road, and signed more than a dozen contracts with France, including a 300-plane order with Airbus and a deal with energy company EDF to build an offshore wind farm in China.

China has long considered Taiwan, which is self-ruled and recognized by only a handful of countries, as part of its territory. In January, Xi said he was prepared to use force to reunify Taiwan with the mainland and called for a “one country, two systems” model, similar to that of Hong Kong, that would allow the island state to continue govern on its own. President Tsai Ing-wen of Taiwan rejected the proposal.

Published at France24 .com on April 1. Reprinted here for educational purposes only. May not be reproduced on other websites without permission from France24.

2. For TAIWAN:
a) list the who, what, where and when of the news item
b) What did Pho-Han Wu’s banner say?
c) What was Wu’s goal for holding up the banner on Chinese President Xi Jin Ping’s route?
d) Describe the events after Wu displayed his banner.
e) How did the police explain their actions against Wu?
f) What did Wu accuse the French government of doing?
g) Do you agree with his assertion about President Macron’s government? Explain your answer.

The dispute between China and Taiwan goes back to 1949 and the end of the Chinese Civil War, when the defeated Nationalists fled to the island of Taiwan, leaving the communists in power in mainland China. The two territories have been governed separately ever since, with both governments claiming to be the legitimate representative of “One China” — that is, China andTaiwan.