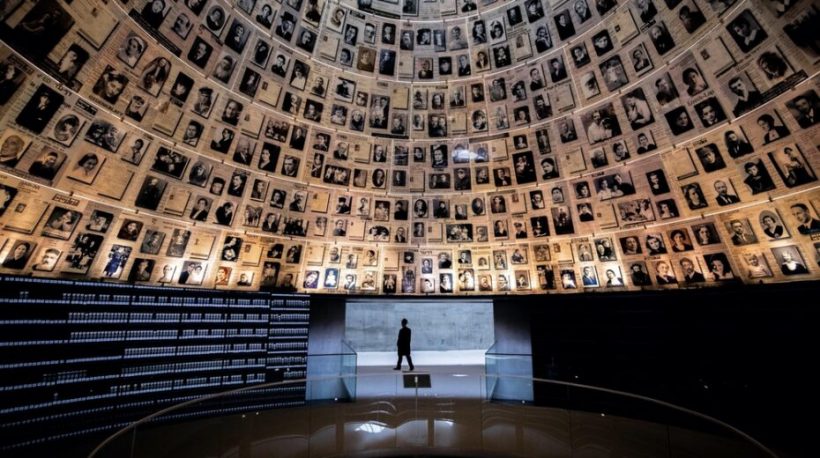 The Hall of Names at Yad Vashem.

The country came to a standstill for 2 minutes at 10 a.m. to mark the remembrance, at which time sirens were heard across Israel.

Each year on Holocaust Remembrance Day, or Yom HaShoah, the 2-minute period completely brings just about all activity to a full stop. Thursday, drivers stood by their vehicles on roads nationwide, pedestrians stopped and traffic ground to a halt when the sirens sounded.

An official opening event at the Yad Vashem Holocaust museum in Jerusalem was held Wednesday night to begin ceremonies for the annual remembrance. Israeli President Reuven Rivlin, Prime Minister Benjamin Netanyahu and some Holocaust survivors and their families were in attendance.

During the ceremony, Rivlin spoke of the 900 Holocaust survivors who died over the past year from COVID-19.

“They survived the ghettos and the death camps, the immigrant ships and the internment camps,” he said, according to The Times of Israel. “But the final battle of their lives was fought with them bewildered and isolated, behind masks and gloves, yearning for contact but parted from their loved ones.”

Thursday, Rivlin and Netanyahu laid a wreath at the museum during a remembrance ceremony.

On Thursday morning, Knesset lawmakers read out the names of Holocaust victims during the “Unto Every Person There is a Name” ceremony. Other remembrance ceremonies in schools, army bases and government buildings were scheduled for later Thursday.

Holocaust Remembrance Day is a national memorial day in Israel and has been observed since the 1950s.

Published at UPI .com. Reprinted here for educational purposes only. May not be reproduced on other websites without permission.

b) How does International Holocaust Remembrance Day differ?

2. List the events that take place in Israel each year on Yom HaShoah.

3. a) For how many minutes does Israel come to a standstill on Yom Hashoah?
b) Watch the videos under “Resources” below. How does this commemoration inspire you?

4. a) How many Jewish people were murdered by the Nazis during WWII?
b) Look through some of the links under “Resources” below (links are below the videos). Visit Yad Vashem’s testimonies page and youtube page and check out some of the survivors’ stories.
Why do you think it is vital for Holocaust Remembrance Day to be commemorated in the U.S. and around the world?

a) What should schools do to educate their students about the Holocaust?
b) Yom Hashoah 2021 was not a big story in American news outlets. Why do you think this is so?
c) How should publishers and editors in every media organization fulfill their responsibility to make sure we never forget?

“When the war was over and the mind-boggling scope of [Hitler’s] Final Solution was fully grasped — the Germans and their collaborators had annihilated 6 million Jews from every corner of Europe, wiping out more than one-third of the world’s Jewish population — the moral imperative to remember grew even more intense.” (from Jeff Jacoby’s commentary: ‘Never forget,’ the world said of the Holocaust. But the world is forgetting)

From HonestReporting.com: Israel on Thursday marked Yom HaShoah, Holocaust Remembrance Day. At 10 AM local time, the entire country comes to a standstill for two minutes as people remember the horrors of the Holocaust, as well as acts of heroism during WWII. Together, we remember six million Jews — and countless others — who were murdered by the Nazis. No people should ever again be defenseless in the face of forces that seek their destruction.

Sirens sounded nationwide with traffic stopped and motorists stepping out of their vehicles to stand for two minutes in honor of the Holocaust dead.
Israel: Country comes to standstill as sirens sound for Holocaust Remembrance Day
(Ruptly News – Russian TV)

Also important, read the miraculous first hand accounts of events leading up to Isarel’s Six Day War: “The Lion’s Gate: On the Front Lines of the Six Day War“