Yom HaShoah 2016: Remembering those killed during the Nazi Holocaust 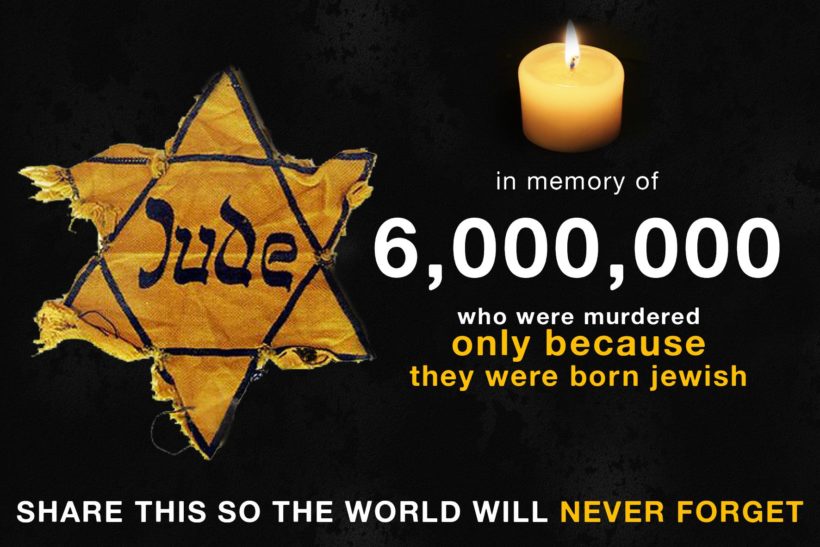 (from the UK’s Metro News) — More than 70 years ago six million Jewish people were killed during the Holocaust.

On Thursday, Jewish communities across the world came together to commemorate those who died at the hands of Adolf Hitler and Nazi Germany during World War II during Yom HaShoah.

What is Yom HaShoah?

Yom HaShoah, or by its full name Yom HaShoah Ve-Hagevurah, is the Hebrew name for Holocaust (Shoah) Memorial Day, literally translated as ‘Day of the Holocaust and the Heroism.’

The day serves as a memorial of those who died during the Holocaust, giving families time to reflect on the lives lost and educate future generations against anti-semitism.

Yom HaShoah is different from International Holocaust Memorial Day [established by the UN], which is held on January 27 every year to mark the date of the liberation of Auschwitz-Birkenau, the largest of the Nazi concentration camps.

The date is always held on the 27th day of the month of Nissan (April/May) on the Hebrew calendar – one week after the end of Pesach (Passover) and one week before Yom Hazikaron, the memorial day for Israel’s fallen soldiers.

The 27th day in Nissan also marks the anniversary of the Warsaw Ghetto Uprising.

March of the Living

The March of the Living is a program that brings Jewish people from all over the world to Poland for Yom HaShoah to march from Auschwitz to Birkenau, the largest concentration camp built during WWII.

As Yom HaShoah is a fairly recent memorial date, there are no specific established rituals.

However, typically synagogues hold memorial services across the globe, where six candles are lit by families of the dead – one for each of the six million victims – and the names of those who died are read out.

Sometimes these ceremonies are held in graveyards or Holocaust memorials as well.

This year in the UK, there will be a memorial service for Yom HaShoah held on May 8th at 2pm at the Barnet Copthall Stadium in London.

How Yom HaShoah is commemorated in Israel

The sound of a siren is blasted across Israel, stopping traffic and pedestrians in their tracks for a two-minute silence.

This usually happens twice during Yom HaShoah – once at 11am and once at sunset – a way of commemorating the dead established in the 1960s.

All theaters, cinemas, pubs and other public entertainment venues are closed throughout Yom HaShoah.

Reprinted here for educational purposes only. May not be reproduced on other websites without permission from the UK’s Metro News.

1. What does Yom HaShoah mean?

3. What is the purpose of Yom HaShoah?

4. a) How is YomHaShoah commemorated in Israel? (For how many minutes do all people come to a stop? When was this established?)
b) Watch the videos under “Resources” below. How does this commemoration inspire you?

5. How is the United Nations’ International Holocaust Remembrance Day different from Yom HaShoah?

6. How many Jews were murdered by the Nazis during WWII?

7. Check out some of the links under “Resources” below (links are below the videos). Why do you think it is vital for Holocaust Remembrance Day to be commemorated in the U.S. and around the world?

Sirens brought Israel to a halt on Thursday as the country remembered the victims of the Holocaust.  All stood silent for two minutes to mark Holocaust Memorial Day.  The siren was followed by ceremonies at schools, memorials and elsewhere in honor of those who lost their lives as well as Shoah survivors.

For the United States Holocaust Memorial Museum in Washington D.C., go to ushmm.org.