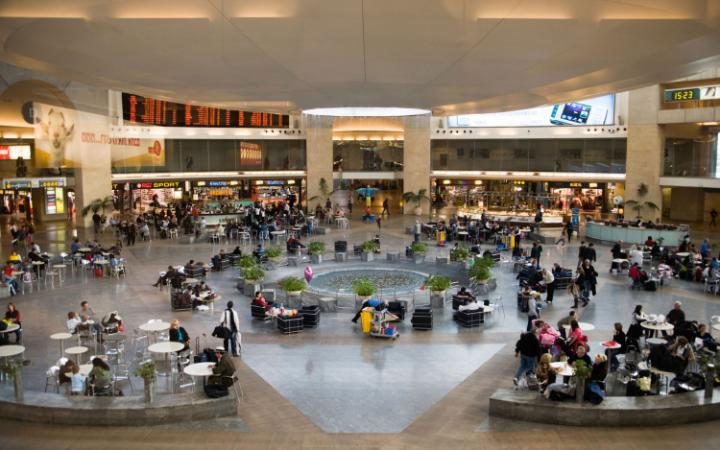 At the airport entrance – over two miles from the check-in desks – armed guards screen every arriving vehicle and briefly question those inside. By the time a traveller is finally allowed to board a plane departing from Israel, he or she will have cleared no less than 12 layers of security.

The disappearance of EgyptAir flight MS804 after its departure from Paris has raised more questions about the ability of European airports to protect their passengers. Next month, Ben Gurion airport will share its expertise with aviation security officials from 33 countries, including Britain and France.

Israel has suffered decades of terrorism, but no-one has been killed or wounded inside Ben Gurion airport – or on board an aircraft departing from its runways – for the last 44 years.

This was not a matter of chance. Ben Gurion is the only international airport in Israel, so the country would be isolated from the world if any terrorist group were to shut down its terminal buildings.

Shmuel Zakay, the managing director of Ben Gurion, is under no illusion about the dangers. “This airport is under constant threat,” he said. “All terrorist organizations know the consequences of hitting Ben Gurion airport. The consequence would be to place the entire state of Israel under an air blockade.”

Israel’s response is a multi-layered security system, starting at the airport’s perimeter entrance. Some passengers clear every hurdle with ease; others, by contrast, can be subjected to extra searches or lengthy questioning.

Their fate depends on where they are placed in an individual threat assessment. A key moment occurs in the queue for the check-in desk. At this point, every passenger is interviewed by a security official. This encounter can last as little as a minute – after which the passenger is assessed as being of low threat and allowed to proceed.

But this interview can lead to passengers being taken away for further questioning and searches. “We are looking for suspicious signs or abnormal behavior in order to increase our chances of detecting a terrorist as far as possible from the main target, the airplane,” said Mr. Zakay.

This aspect of Ben Gurion’s security system is also controversial. Airport officials will not say what criteria they use to assess the threat posed by passengers. They deny this procedure amounts to profiling.

But Arab Muslims are likely to be singled out for lengthy questioning, particularly if they have travelled elsewhere in the Middle East.

Whereas European airports usually apply the same procedures to everyone, Ben Gurion’s doctrine is “risk-based security.” The system is designed to identify passengers who are believed to pose a high risk and subject them to special checks.

“There are some measures that fit only to Israel,” said Mr. Zakay. “When I read in the media ‘why don’t European airports copy the Israeli security concept?’ It’s impossible. We are a unique country with a unique security structure.”

In addition, Ben Gurion is the only international airport in Israel, allowing the country to focus all of its effort and expertise on this one facility.

Officials believe that Europe will never copy every aspect of Israel’s approach towards aviation security. But the central idea – that potentially dangerous passengers must be singled out as early as possible – is being applied in different ways by European airports. The era of one-size-fits-all security is coming to an end.

1. Where is Ben Gurion International Airport?

2. How many layers of security must a traveler go through before boarding a plane at Ben Gurion?

3. Why is security and preventing any terrorist attacks especially important at this airport?

4. a) What factors affect a passenger’s trip through the security procedures at Ben Gurion?
b) What do security screeners look for?

5. What is the safety record at Ben Gurion?

6. a) What is “risk based security”?
b) Shmuel Zakay doesn’t think Israel’s security procedures would work in much larger European countries. Although they have five times as many passengers, these countries also have much greater resources. Do you think Europe should implement Israeli type security? Explain your answer.

7. The reporter concludes the article with:
“Officials believe that Europe will never copy every aspect of Israel’s approach towards aviation security. But the central idea – that potentially dangerous passengers must be singled out as early as possible – is being applied in different ways by European airports. The era of one-size-fits-all security is coming to an end.”
What do you think for the U.S. – should potentially dangerous passengers be singled out as early as possible? Explain your answer.

8. From para. 11: “Arab Muslims are likely to be singled out for lengthy questioning, particularly if they have travelled elsewhere in the Middle East.” Airport officials deny they use profiling.
a) Do you think the Jewish state of Israel should not single out Arab Muslims for questioning? Explain your answer.
b) Do you think your answer would be different if you traveled through Ben Gurion airport regularly? Explain your answer.

9. Ask a parent to read the following and then answer the questions below it:

Do you agree with Mr. Baum’s assertion or do you think our TSA already does an excellent job and no change is needed?
Or would some other change in security procedures be better? If so, what? Please explain your answer.

Ben Gurion International Airport is one of the world’s most secured airports. Security operates on several levels: