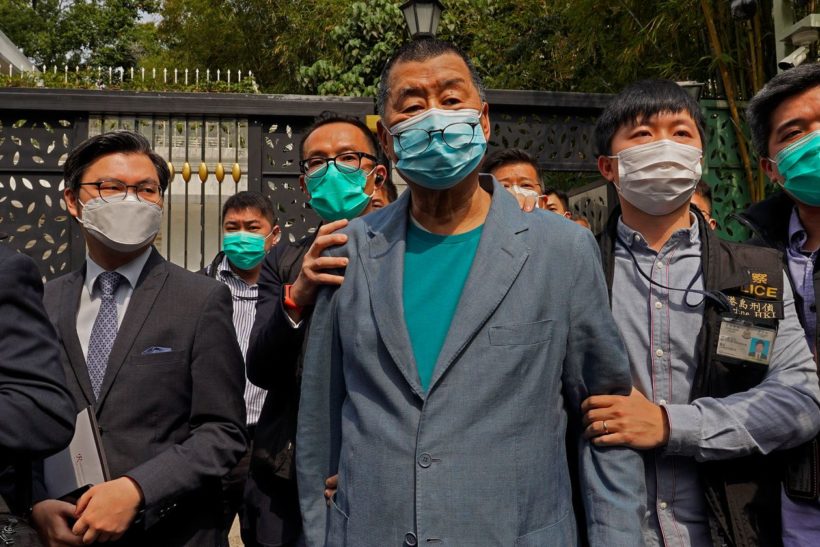 Jimmy Lai, center, who founded local newspaper Apple Daily, is arrested by police officers at his home in Hong Kong.

(by Emily Jacobs, New York Post) – The US is speaking out against China after 15 pro-democracy activists and former lawmakers in Hong Kong were arrested for their involvement in protests last year that left the city in a tense power struggle with the Chinese Communist Party in Beijing.

The arrests — which included two prominent politicians and a millionaire media mogul — marked the biggest crackdown from the Communist government since the mass protests began.

Among those detained were Martin Lee, 81, founder of the Democratic Party and a senior barrister; publishing tycoon Jimmy Lai, 71; and former legislator and barrister Margaret Ng, 72.

Hong Kong Police Superintendent Lam Wing-ho told reporters that those arrested were charged with organizing and participating in “unlawful assemblies” last summer and fall. They are due in court on May 18.

U.S. Secretary of State Mike Pompeo condemned the arrests in a statement Sunday, saying “Beijing and its representatives in Hong Kong continue to take actions inconsistent with commitments made under the Sino-British Joint Declaration.”

That declaration, Pompeo said, included a requirement for Beijing to maintain “transparency, the rule of law, and guarantees that Hong Kong will continue to “enjoy a high degree of autonomy.”

U.S. Attorney General William Barr echoed Pompeo’s remarks in a similar statement Sunday, condemning “the latest assault on the rule of law and the liberty of the people of Hong Kong.”

China’s foreign ministry rejected the criticism, saying that the matter was an internal one and that “foreign countries have no right to intervene.”

“U.S. politicians ignore facts, distort the Sino-British joint declaration, use ‘transparency, rule of law and a high degree of autonomy’ as excuses to exonerate the anti-China activists,” a Chinese statement obtained by Bloomberg read, “The immoral behavior of colluding with the anti-China activists in Hong Kong will be condemned by the international community.”

*In 1997, Hong Kong, a former British colony, was returned to Communist Chinese rule under a “one country, two systems” form of government. It was given wide-ranging autonomy, including an undated promise of “universal suffrage.” However, in 2014, Beijing (the Chinese Communist government) made it clear it would not allow fully-democratic elections for the city’s next chief executive in 2017 and after.

NOTE: Before answering the questions, read the “Background” and watch the videos under “Resources” below the questions.

1. Who was arrested by the Chinese communist government in Hong Kong over the weekend? Be specific.

2. What charges were brought against those arrested?

3. a) What is the Sino-British Joint Declaration?
b) How did China violate its agreement, according to U.S. Secretary of State Mike Pompeo?

6. Check out the links below the videos under “Resources” to learn about Hong Kong’s pro-Democracy protesters (many of whom are high school and college students).
Watch the video. Consider Mr. Les’s expected outcome for the protests.
The U.S. continues to support Hong Kong, as do some other western countries. The UN has demonstrated its ineffectiveness and corruption relating to many authoritarian regimes (China was just appointed to an important committee on the UN Human Rights Council; the UN’s World Health Organization helped China cover-up coronavirus in the beginning, etc.).

What are your thoughts on this news story?

More from April 18 reports at  Bloomberg and NY Post:

Ms. Mo, who was not arrested, said Hong Kong’s Chief Executive Carrie Lam wanted to “introduce a ring of terror in Hong Kong.”

“They are doing whatever they can to try to silence, to take down, the local opposition,” Mo said in a statement.

The coronavirus outbreak has essentially brought a halt to protests in Hong Kong opposing China’s increasing control over the city, which saw hundreds of thousands of people hit the streets over months in demonstrations that sometimes turned violent.

The arrests come after several months of relative calm because of a partial coronavirus lockdown and just as Chinese and pro-communist Hong Kong government officials begin pushing for tougher national security laws for Hong Kong.

Beijing has used the pause to reassert its strength, including by naming Xia Baolong — a close aide to President Xi Jinping who was previously known for tearing crosses from the roofs of churches in China — to oversee Hong Kong affairs.

The mainland’s Hong Kong and Macau Affairs Office, the top agency overseeing the financial hub, last week accused lawmakers of potentially violating their oaths by blocking action by the local Legislative Council — a statement that carries even more significance ahead of elections for the body known as LegCo set for September. Chief Executive Carrie Lam and other pro-establishment [pro-communist] figures also said the opposition [pro-democracy group] was endangering Hong Kong’s autonomy and livelihoods, echoing criticism from China.