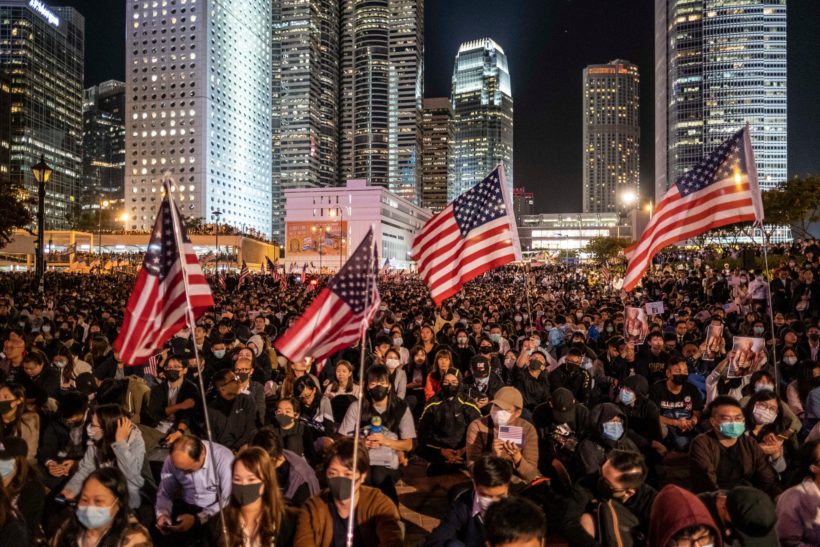 (Compiled from articles at the NY Post and UPI) – China retaliated against the United States on Monday over U.S. legislation that supports pro-democracy protesters in Hong Kong by suspending port calls by U.S. military ships to the region and imposing sanctions against non-governmental organizations.

The legislation, approved by near unanimous consent in the House and Senate, would impose sanctions on China and Hong Kong officials for human rights violations that are perpetrated in the semi-autonomous territory. Trump signed the bills even as he expressed some concerns about complicating the effort to work out a trade deal with China’s President Xi Jinping.

“I signed these bills out of respect for President Xi, China and the people of Hong Kong,” Trump said in a statement. “They are being enacted in the hope that leaders and representatives of China and Hong Kong will be able to amicably settle their differences leading to long-term peace and prosperity for all.”

Following the announcement against the U.S. military, China also sanctioned several NGOs, including Human Rights Watch, the National Endowment for Democracy, the National Democratic Institute for International Affairs, the International Republican Institute and Freedom House, Hua said, blaming them for fueling the months of instability that have rocked Hong Kong.

“There is a lot of evidence proving that these NGOs have supported anti-China forces to create chaos in Hong Kong, and encouraged them to engage in extreme violent criminal acts and ‘Hong Kong independence’ separatist activities,” she said. “They have a large responsibility for the chaos in Hong Kong and deserve to be sanctioned and pay the price.”

At least 5,890 people have been arrested since unrest began in June, when demonstrators took to the streets to protest Communist China’s violation of freedoms guaranteed to Hong Kong when the United Kingdom gave the former British colony back to Chinese rule in 1997.

A Wikipedia report states: “One day after the U.S. bill’s passage on November 27, pro-democracy demonstrators in Hong Kong celebrated the new law and held a pro-American rally. At the rally, held on U.S. Thanksgiving Day, Hong Kong pro-democracy activist Nathan Law called the law a ‘timely Thanksgiving present.’ Thousands of activists at the ‘Thanksgiving Rally’ waved American flags and sang the The Star-Spangled Banner…expressing gratitude to the United States, Congress and President Trump for passing the law.

“Fight for freedom, stand with Hong Kong,” thousands of protestors chanted in a public square as they waved American flags and held up copies of a photo of President Trump’s head on Rocky Balboa’s body. [It was a photo Trump had tweeted out the previous week with no accompanying text.]

Joshua Wong, a well-known pro-democracy activist who was among those who lobbied for the laws, told protesters Thursday their next goal is to get other Western leaders to follow in Trump’s footsteps in order to get the Chinese government to allow Hong Kong the autonomy it was guaranteed in the 1997 handover from the UK.

On the mainland, Chinese government officials were enraged by the new laws and said Trump is using Hong Kong as a pawn to hamper China’s growth and hit back at Beijing.

In response, the US Embassy in Beijing said China’s Communist Party “must honor its promises to the Hong Kong people.”

Compiled from articles by Darryl Coote at UPI on Dec. 2, and NY Post articles by Kenneth Garger on Nov. 27, Mary Kay Linge on Nov 30 and Gabrielle Fonrouge on Nov. 28. Reprinted here for educational purposes only. May not be reproduced on other websites without permission.

2. For HONG KONG:
a) list the who, what, where and when of the news item
b) What do the two bills mandate?
c) How many protesters (who are mostly in their teens and twenties) have been arrested since they initially stood up to China’s concerning extradition law?
d) What does pro-democracy leader Joshua Wong want other world leaders to do following passage of the U.S. laws in support of Hong Kong?
e) President Trump signed the bills into law despite the ongoing trade negotiations with China, knowing what the reaction of the Communist government would be. Do you think Chinese leaders will view the President’s decision as one of strength or weakness?
f) Do you think it was important for President Trump to sign these bills into law?
g) Watch the video under “Resources” below. What is your reaction to General Keane’s observations on the situation in Hong Kong in relation to the U.S. bills and China?

The Hong Kong protesters are determined to stand up for their freedom. Read a previous article from September 10: “Hong Kong Protesters appeal to Trump for help”