World #3: US sells Taiwan $2.4 billion of coastal defense systems to protect from China 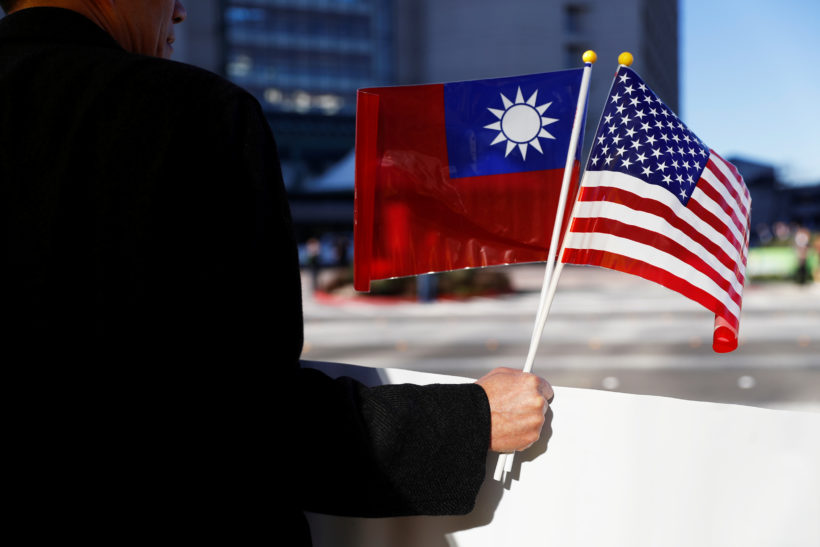 A man holds flags of Taiwan and the United States in Burlingame, California. The Trump administration has ramped up support for Taiwan through arms sales and visits by senior U.S. officials. (Photo: Stephen Lam / Reuters file)

(from AFP Agence France-Presse at France24) — The United States on Monday, Oct. 26 said it had approved a $2.4 billion sale of 100 Harpoon coastal defense systems to Taiwan, defying Beijing’s anger over a $1 billion missile deal [the U.S. made with Taiwan the week before].

The announcement came just hours after Beijing said it would sanction US firms involved in an earlier arms sales to the democratic self-ruled island.

The proposed sale of the Harpoon systems “will help improve the security of the recipient and assist in maintaining political stability, military balance… and progress in the region,” the State Department said in a statement.

The missiles, manufactured by Boeing, can be positioned on fixed platforms or mounted on trucks.

The office of Taiwan’s President Tsai Ing-wen released a statement thanking the United States for the sale, saying it would “upgrade asymmetric warfare capabilities.”

Democratic and self-ruled Taiwan lives under constant threat of invasion by authoritarian China, whose leaders [claim] the island [is] part of their territory.

They have vowed to one day seize the territory, by force if necessary.

Beijing has ramped up diplomatic and military pressure on Taiwan since the 2016 election of Tsai, who views the island as a de facto sovereign nation and not part of “one China.”

Chinese fighter jets and bombers have entered Taiwan’s air defense zone with unprecedented frequency in recent months, while propaganda films have shown simulated attacks on Taiwan-like territories and US bases in Guam.

Washington diplomatically recognizes Beijing over Taipei but it is also bound by an act of Congress (the Taiwan Relations Act of 1979) to sell Taiwan weapons to defend itself.

In contrast to treaty allies like Japan, South Korea and the Philippines, the US has never openly committed to defending Taiwan if it was invaded — a policy known a “strategic ambiguity.”

But it maintains that any change to Taiwan’s future status must not be done by force.

Taiwan’s military is dwarfed by China’s People’s Liberation Army and much of its equipment, including its fleet of fighter jets, is aging.

Recent US presidents were wary of big-ticket arms sales to Taiwan for fear of provoking Beijing.

But President Trump has been much less squeamish, signing off on multiple sales worth billions in recent years, as he clashes with China on a host of issues.

Last Wednesday, the US said it had approved the $1 billion sale of 135 precision-guided, air-launched AGM-84H SLAM-ER cruise missiles — which unlike the Harpoon have a range greater than the width of the Taiwan Strait that separates the island from mainland China.

In response, Beijing on Monday said it would impose sanctions on Lockheed Martin, a Boeing defense division and other US firms involved in the arms sale. …

From an AFP report published at france24 .com on October 27, 2020, with Post Wires. Reprinted here for educational purposes only. May not be reproduced on other websites without permission from Agence France-Press and France24.

2. How did the communist government of China react to the U.S. arms sales to Taiwan?

3. What is the purpose of the U.S. sale to Taiwan?

4. Why is China such a threat to Taiwan?

5. a) How does President Trump differ from his predecessors in the type of arms sales with Taiwan?
b) Consider the “Background” and “Resources” below, including the Taiwan Relations Act of 1979. Which do you think is the better policy, Trump’s or “recent administrations” (most likely Obama, Bush and Clinton?)? Explain your answer.