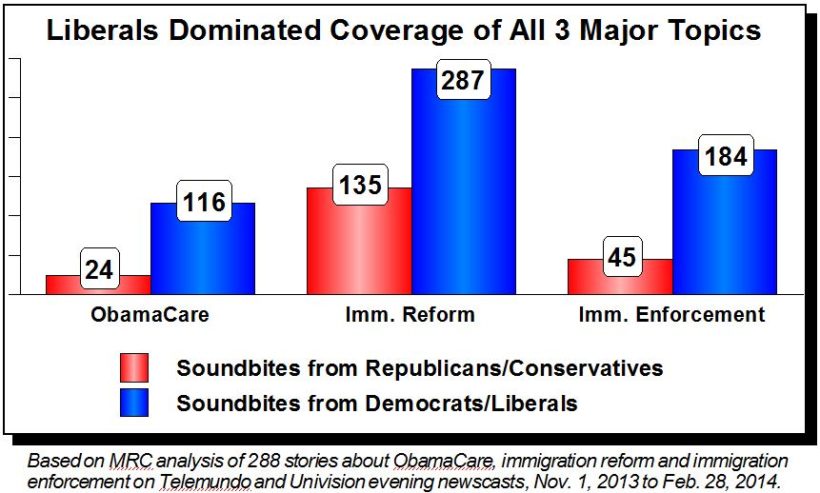 With a combined audience of approximately three million, the national evening newscasts of Univision and Telemundo have a viewership that rivals that of the top 10 cable news shows. …

This study found a marked leftward tilt in both of the networks’ news coverage, particularly in reporting U.S. domestic policy news, with Democratic, left-leaning sources overwhelmingly dominating U.S. coverage. In international news, however, both networks maintained a more critical and/or balanced stance in relation to governments in the region, as is the journalistic norm.

MRC’s analysis examined, where applicable, three elements in the networks’ coverage of each domestic policy topic:

The prevailing tilt of a story was determined by tallying all statements from journalists and quoted sources that articulated either a recognizably liberal or conservative point of view on a given subject. If the total of these comments were tilted in either direction by a greater than three-to-two margin, then the story was scored as having either a “liberal” or “conservative” spin. Otherwise, the story was classified as “neutral” or “balanced.”

Among the major findings of the MRC’s first-ever study of the news on the nation’s top Spanish-language television networks:

…Our [analysis] shows America’s top Spanish-language news networks are failing to fully live up to their journalistic vocation when they let their [national] news content be dominated by partisans on one side of the ideological spectrum. … Just like the rest of America’s news consumers, viewers of U.S. Spanish-language networks deserve news coverage that is comprehensive, fair and accurate, adhering to the highest standards of journalistic integrity.

How might Univision and Telemundo’s slanted reporting on domestic issues affect the viewpoint of their Spanish speaking viewers?

If Univision and Telemundo were a person’s main sources for news (especially for those American voters who only speak Spanish), the slanted reporting on domestic issues would cause them to unknowingly view domestic issues through a distorted lens and affect the way these viewers vote, instead of giving them a balanced view of the news.