Posted on October 28, 2009 in Wednesday's Example of Media Bias

-Read the excerpt below from Tom Gross's October 10th post at NationalReview.com.
-Read "Types of Media Bias" in the right column. Then answer the questions.

The British [news]paper The Guardian – which one would just dismiss as an irrelevant left-wing [news source], except that it is the overwhelming paper of choice for British teachers and for news staff at the BBC, the world’s largest broadcasting network, who are “inspired” by Guardian stories on a daily basis in their broadcasts – … has wiped Israel off the Nobel Prize map, much as Iranian despot Mahmoud Ahmadinejad would like to wipe Israel off the real map.

To accompany their story about Barack Obama winning the 2009 Nobel Peace Prize, The Guardian posted on their website what they claimed was “every peace prize winner ever,” stating that the information came from the website Nobelprize.org. But guess whose names The Guardian took off the list…? All three Israelis who have won the peace prize: Menachem Begin, Yitzhak Rabin and Shimon Peres.

Following outrage in Britain, including online articles on the websites of the conservative-leaning Daily Telegraph and Spectator…, The Guardian slipped the Israeli names back on to their list.

The Guardian had no trouble keeping FW De Klerk, the last president of Apartheid South Africa, on their original list. It is only [Jewish winners] – and their achievements – which they tried to wipe off the map.

And this from a paper whose motto is “Facts are sacred”. …The Guardian … misleads readers about Israel on a regular basis by omitting crucial information that portrays Israelis in a positive light.

… the (London) Jewish Chronicle and the Harry’s Place blog managed to upload The Guardian’s Israel-free Nobel list before The Guardian slipped the names back in.

Below, The Guardian omitted Israeli political leaders Shimon Peres and Yitzhak Rabin, who won the peace prize jointly with [Palestinian leader] Yasser Arafat in 1994. (Incidentally The Guardian forgot to remove the word “Israel” when removing the names of the Israeli winners): 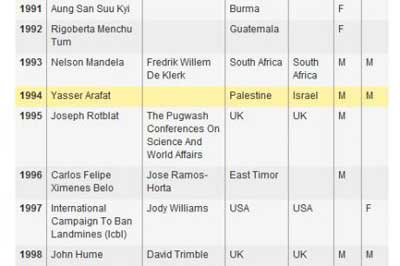 [Israeli Prime Minister] Menachem Begin and Egyptian President Anwar Sadat were jointly awarded the 1978 peace prize for signing an Israeli-Egyptian peace treaty. Only Sadat was listed by The Guardian: 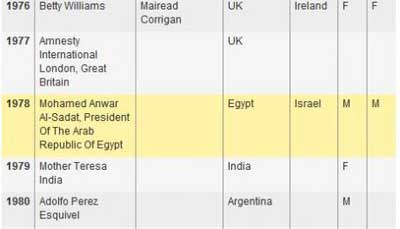 1.  What type of bias is the excerpt an example of?

2.  The Guardian explained that the names of Jewish recipients Shimon Peres, Yitzhak Rabin, and Menachem Begin had been left out of the list of Nobel Prize winners because of a glitch in the entering of data in the Nobel listings.  The Guardian has been accused of being anti-Semitic and pro-Palestinian.  Do you think it was a glitch that neither the reporter nor editor noticed when proofreading, or were the Jewish Peace Prize recipients intentionally left out by The Guardian?  Explain your answer.

1. The excerpt is an example of bias by omission.