Should the Media Report on the Presidential Bow to the Saudi King?

Posted on April 8, 2009 in Wednesday's Example of Media Bias

-Read the excerpt below from AmericanThinker.com.
-Read "Types of Media Bias" in the right column. Then answer the questions.

When meeting the Saudi King for the first time at a reception in London, the President of the United States unmistakably bowed deeply and even bent his knee.

The American mainstream media apparently paid no heed, and instead focused on Michelle Obama casually touching the Queen of England when introduced to the United Kingdom’s monarch. If anyone has seen [the mainstream media] MSM paying attention to this signal event, a traditional acknowledgement of fealty, please let me know.

If it was not a gesture of subordination, why did the Saudi King fail to respond with a similar bow?

Yes, it is true that George W. Bush held the Saudi monarch’s hand and kissed his cheek. But hand holding by men is a common gesture of friendship, not subservience, in Arab culture, as is kissing of the cheek. …

There is no question that an unreciprocated bow is a gesture of subservience. Bowing is a very serious matter in many cultures. …

Among Muslim democrats and human rights advocates, utter dejection that the “leader of the Free World” has offered himself as a “subject” of the Saudi monarch; among Islamists, bliss over America’s seeming prostration before Salafist Islam; among international bad actors, assurance that America poses no threat; and among our allies, depression about the new systemic instability of the most dependable superpower in history.

… Until evidence is produced that Barack Obama habitually bows and bends his knee before others, I will have to assume that he meant this gesture to carry meaning. It is simply amazing to me that our media will not even present this image to the American public. 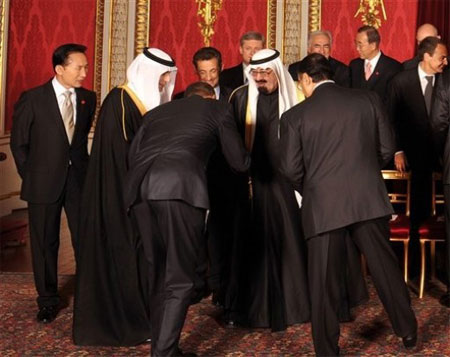 1.  Is bowing to the Saudi King a sign of subservience by the President of the United States?  Explain your answer.
When he met Queen Elizabeth of England earlier in the week, why do you think that President Obama did not bow to her as well?

2.  The media widely reported on President Bush holding the hand of the Saudi king as they walked together (an Arab custom).  Is the media responsible to report on President Obama bowing to the king, and the king not responding with the same gesture?  Is the non-reporting of this story by the media bias by omission?  Explain your answers.

3.  Heads of state and their wives do not bow and curtsy to one another.  According to Miss Manners, “One does not bow or curtsy to a foreign monarch because the gesture symbolized recognition of his power over his subjects.”  President Obama’s bowing to King Abdullah was not something a U.S. President should do.  Considering this unprecedented action, why do you think the media chose not to report this story?