Should the media ask who organized anti-Kavanaugh protests?

Posted on October 10, 2018 in Wednesday's Example of Media Bias 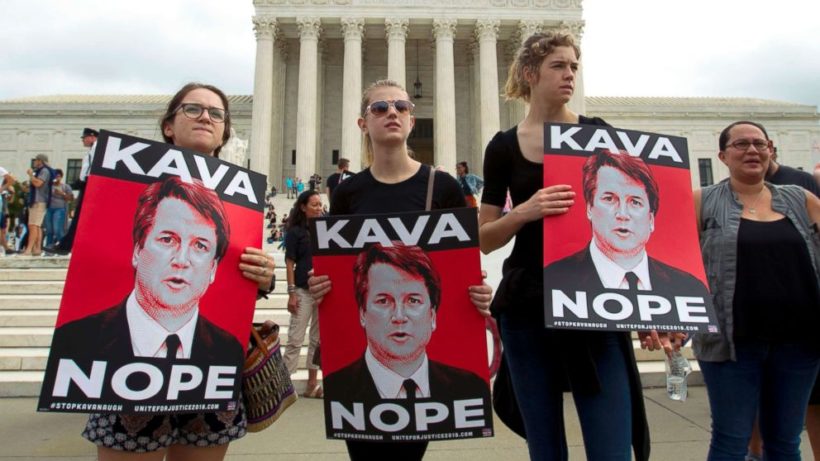 Asra Nomani, who wrote a Wall Street Journal op-ed tracking the money behind the anti-Kavanaugh protests, appeared on Fox & Friends Tuesday to discuss her piece.

“I followed the money for the last two years ever since #Resistance emerged the day after Trump was elected, and the money leads us back to … George Soros and his philanthropy empire.” (She provides a spreadsheet with details in her op-ed.)

“It’s not the individual protestors that are getting the money,” she said. “But it is the [liberal/progressive] organizations that are running these protests.”

Ms. Nomani wrote in her op-ed:

…Saturday’s protests [against Judge Kavanaugh] and unlawful disruptions were part of a well-funded, orchestrated network that books buses, hotel rooms and churches for such agitation.

Soros-funded MoveOn .org wrote a guide, “How to Bird Dog”—harass officials in public places—in the spring of 2017, in preparation for town-hall meetings during a congressional recess. Over the past year, I have dialed in to MoveOn .org’s Sunday evening phone calls where they plan the operations and tell their “troublemakers” how to corner lawmakers. I still get alerts for their planning sessions. The last ones have been to #stopKavanaugh.

MoveOn .org announced that its call the night after Justice Kavanaugh’s confirmation would feature Ana Maria Archila, the Colombia-born sexual-assault victim who cornered Sen. Jeff Flake in a Senate elevator last month while a confederate screamed “Look at me!” She is co-executive director of the Center for Popular Democracy. Her salary was listed as $156,333, with a bonus of $21,378, in a recent Internal Revenue Service 990 form.

What I have pieced together is an open secret but one that journalists tend to avoid.  …

(NOTE: Asra Nomani is a former The Wall Street Journal correspondent and has written for The Washington Post, The New York Times, Slate…. She was a correspondent for Salon .com in Pakistan after 9/11, and her work appears in numerous other publications… She was a visiting scholar at the Center for Investigative Journalism at Brandeis University. She was a Poynter Fellow at Yale University. Nomani is the founder and creator of the “Muslim Women’s Freedom Tour.”)

It’s a sign of media bias that the people from the well-funded groups behind the anti-Kavanaugh protests are described merely as “activists” and that their political motives and origins are largely unexplored.

Ana Maria Archila and Maria Gallagher were the two women who confronted Republican Senator Jeff Flake inside the elevator. …Few media outlets dug into their political activism. Archila is an executive director of the Center for Popular Democracy; she had spent the previous week in Washington engaged in protests against Kavanaugh. Gallagher is a 23-year-old activist with the group. The center is a left-wing group heavily funded by George Soros’ Open Society Foundations*. Indeed, as of 2014, Open Society was one of the three largest donors to the group. [*Conservapedia notes: Open Society Foundations is a left-wing organization founded by major liberal and globalist donor George Sorosto to financially support political parties and politicians, and to influence referendums in America and Europe. The organization is disguised as a philanthropic development aid funds.]

I have no doubt that the vast majority of protesters who want to stop Brett Kavanaugh are sincere and are merely exercising their constitutional rights. But imagine if two women had cornered a Democratic senator in an elevator and demanded an investigation of who had leaked to the media Christine Blasey Ford’s letter alleging that Kavanaugh had sexually assaulted her. … Reporters would have…hunted down any ties between the women and outside groups.

1. What does Asra Nomani imply in her statement; “What I have pieced together is an open secret but one that journalists tend to avoid. Many (including me) sympathize with the liberal causes Open Society champions. Some have been paid Open Society Fellows or grantees.”

2. Do you agree with John Fund’s assertion: “It’s a sign of media bias that the people from the well-funded groups behind the anti-Kavanaugh protests are described merely as “activists” and that their political motives and origins are largely unexplained.”? Explain your answer.

3. The only reports that have been published as of Tuesday evening regarding Ms. Nomani’s investigative piece were in were in response to a tweet made by President Trump following her interview on Fox. The president tweeted “The paid D.C. protesters are now ready to REALLY protest because they haven’t gotten their checks – in other words, they weren’t paid! Screamers in Congress, and outside, were far too obvious – less professional than anticipated by those paying (or not paying) the bills!” (tweeted at 8:32 AM)

“The real purpose of the ‘paid protester lie – The Washington Post

Watch Ms. Nomani’s interview. Read her WSJ article. Why do you think the media chose not to investigate the protesters the way Ms. Nomani did?

1. Ms. Nomani implies that the media displays bias by story selection and omission. (She notes that she is a liberal but she still investigated to discover the truth.)