Posted on March 4, 2020 in Wednesday's Example of Media Bias 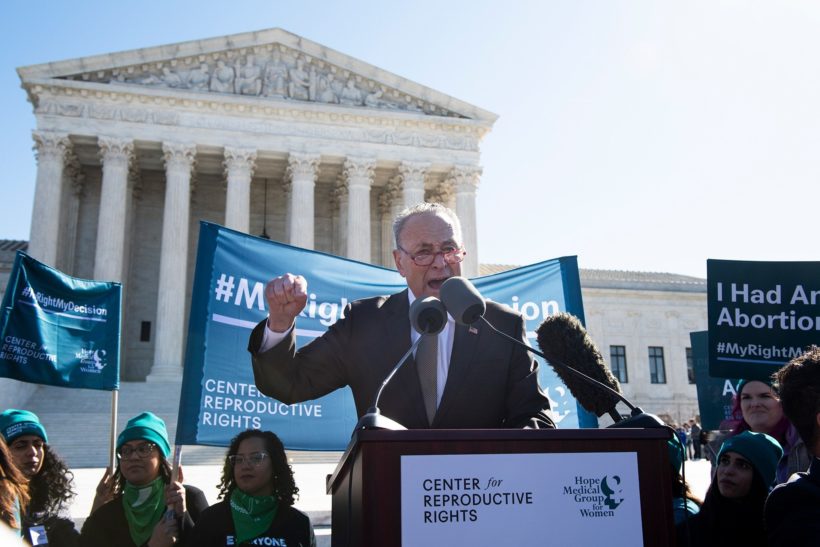 Democratic Senate Minority Leader Chuck Schumer gives the thumbs down to Justices Gorsuch and Kavanaugh before threatening them at a pro-abortion rally in front of the Supreme Court on Wed., March 4.

Senate Minority Leader Chuck Schumer (D-N.Y.) warned that the Supreme Court’s two newest Republican-appointed justices will “pay the price” if they rule on a high-profile abortion case in a way that abortion proponents don’t like.

Schumer made the remarks at a pro-abortion rally in front of the Supreme Court on Wednesday while oral arguments in the case were taking place inside.

Schumer began his remarks by noting that the court was hearing arguments for the “first major abortion rights cases since Justice Kavanaugh and Justice Gorsuch came to the bench.” After saying each justice’s name, the New York Democrat made a thumbs-down gesture that was met with boos from the rally attendees.

“We know what’s at stake,” the senator continued, growing increasingly louder as he spoke. “Over the last three years, women’s reproductive rights have come under attack in a way we haven’t seen in modern history. From Louisiana to Missouri to Texas, Republican legislatures are waging a war on women — all women — and they’re taking away fundamental rights.

“I want to tell you, Gorsuch, I want to tell you, Kavanaugh: You have released the whirlwind, and you will pay the price,” Schumer emphatically shouted to cheers from the crowd of abortion supporters. “You won’t know what hit you if you go forward with these awful decisions.”

…The June Medical Services v. Russo case that the Supreme Court heard Wednesday is Kavanaugh’s first one dealing with abortion since being confirmed in 2018. It challenges whether the state of Louisiana can enforce a law that requires doctors who perform abortions in separate facilities have admitting privileges at a hospital within 30 miles of their facility. Abortion proponents fear that the court may use it to significantly expand states’ ability to restrict abortion access.

This morning, Senator Schumer spoke at a rally in front of the Supreme Court while a case was being argued inside. Senator Schumer referred to two Members of the Court by name and said he wanted to tell them that “You have released the whirlwind, and you will pay the price. You will not know what hit you if you go forward with these awful decisions.” Justices know that criticism comes with the territory, but threatening statements of this sort from the highest levels of government are not only inappropriate, they are dangerous. All Members of the Court will continue to do their job, without fear or favor, from whatever quarter.

Rather than admit his rhetoric was inappropriate, Schumer’s spokesman Justin Goodman accused Roberts of bias in a statement made to Fox News.

“Sen. Schumer’s comments were a reference to the political price Senate Republicans will pay for putting these justices on the court, and a warning that the justices will unleash a major grassroots movement on the issue of reproductive rights against the decision,” Goodman claimed. “For Justice Roberts to follow the right wing’s deliberate misinterpretation of what Sen. Schumer said, while remaining silent when President Trump attacked Justices Sotomayor and Ginsberg last week, shows Justice Roberts does not just call balls and strikes.”

However, President Trump didn’t threaten Sotomayor or Ginsburg but argued they’d demonstrated anti-Trump bias and should recuse themselves from Trump-related cases.

It is clear from the video that Schumer was specifically saying Gorsuch and Kavanaugh would pay a price, not Senate Republicans.

Most media outlets downplayed Senator Schumer’s threats. NBC, ABC, CBS and USA Today all referred to Sen. Shumer’s threats as “comments” about the justices. This is bias by spin. Bias by spin occurs when the story has only one interpretation of an event or policy, to the exclusion of the other; spin involves tone – it’s a reporter’s subjective comments about objective facts; makes one side’s ideological perspective look better than another.

Major media reports only included Senator Schumer’s threats within articles about the case, such as NBC’s: “Abortion rights demonstrators rally outside Supreme Court as major case is heard.”  Other reports were similar.

What do you think?  — If a Republican senator had shouted similar statements at a rally outside the Supreme Court naming liberal justice Sonia Sotomayor or Ruth Bader Ginsburg do you think the media response would have been different? Explain your answer.