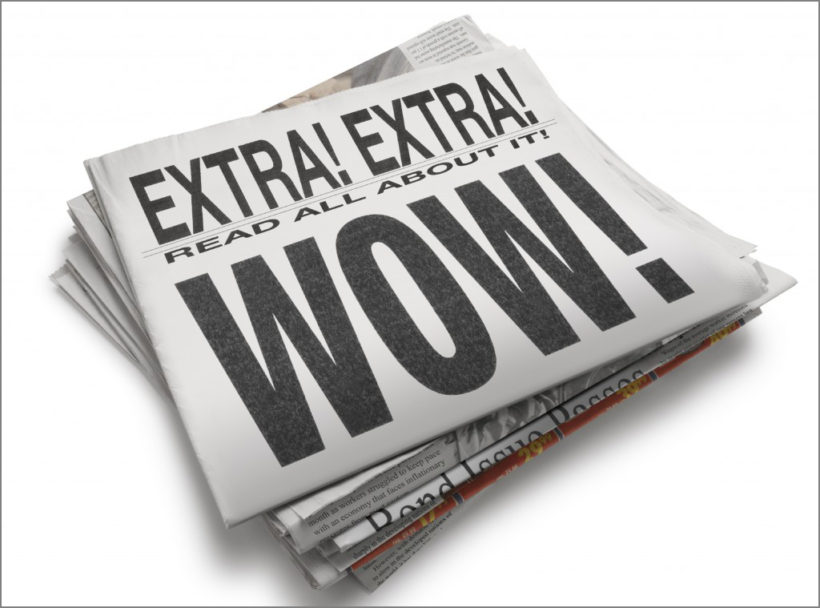 …A new study shows that headlines can have more of an effect on a reader’s interpretation of an article than the text in the article itself – even if the whole article is read.

Everybody’s familiar with tabloid-style headlines that are clearly exaggerations or fabrications. Misleading headlines in supermarket tabloids and gossip magazines are to be expected. But what happens when the line between tabloid and hard news starts to blur? …..

What happens when one of the most well-known, supposedly unbiased news outlets is just as misleading [as the tabloids]? Check out this CNN article from September 2014 titled:

“Ebola in the air? A nightmare that could happen.”

This headline is definitely going to get some clicks (“ebola” was the top search term in 2014), but the experts interviewed for the story claimed that the chances of ebola mutating to spread through the air are actually very small. The headline could just as easily have been:

The Australian study, published in the Journal of Experimental Psychology: Applied, gave participants four articles to read – two factual pieces and two opinion pieces, all of which were 400 words or less.

The articles also presented different slants in their headlines. For example, one of the factual pieces concerned burglary rates, which had decreased by 10 percent in the past decade but showed a 0.2 percent rise in the last year. Readers read two articles on this topic, one titled:

“Number of Burglaries Going Up” and one called:

When the study participants faced a surprise quiz after reading the articles, they were better at recalling information that was congruous [compatible; matched] with the headline. In other words, readers could remember more details about the declining trend in the article titled “Downward Trend…” while also having better retention of the 0.2 percent increase in the article titled “Number of Burglaries Going Up.”

The headlines told readers what to focus on, and those are exactly the details they retained. On the other hand, most readers were able to infer that the burglary rate would decrease next year regardless of article headlines. …

The main problem here is that publishers are posting articles with…headlines that…end up actually leaving readers with skewed versions of the truth. This happens even if the whole article is read. Thus, the study suggests that content creators are doing a serious disservice to the their readers by using headlines such as these. The question is this: if publishers and article writers know that readers retain information from the headline more than anything else in the article, don’t they have a responsibility to avoid headlines that bend the truth? …

1.  Mr. Anderson concludes his post by asking: “The question is this: if publishers and article writers know that readers retain information from the headline more than anything else in the article, don’t they have a responsibility to avoid headlines that bend the truth?”

For another example of a biased headline read the post below by Andrew Kirell on 10/23/14 at mediaite .com:

The Associated Press has found itself in hot water for a pair of incredibly misleading headlines about a deadly Jerusalem light rail attack allegedly carried out by a member of Hamas.

For those unfamiliar with the October attack: A three-month-old girl was killed, and eight others were injured, when a car plowed through the afternoon crowd at an east Jerusalem light rail station. The suspect attempted to flee the scene but was gunned down by Israeli police. Officials have identified the man as part of Hamas, and have claimed this was a terror attack.

Here’s the headline that accompanied the AP’s original reporting of the story: Regardless of your feelings on the Israeli-Palestinian conflict, it’s easy to see how this headline is egregiously deceptive, especially coming from a respected institution like the Associated Press.

As you can see in the screengrab, the article itself identifies the attack as suspected terrorism. Perhaps a more responsible headline — even at the time when news was still breaking and details were scant — would have been something along the lines of: “9 injured in suspected terror attack at Jerusalem train station” or, even more plainly spoken, “9 injured in suspected attack on Jerusalem train station.”

An hour later, the AP updated its headline: “Car slams into east Jerusalem train station.” Not much better seeing as it bizarrely and passively paints the car as the aggressor. The BBC apparently went with this style of headline, too: “Car hits people at Jerusalem station” (they eventually settled on “Jerusalem car ‘attack’ kills baby at rail station”).

But was it really that difficult to come up with a truthful headline that didn’t downplay the story’s tragic nature and the potential for it having been an intentional attack?

The headline in question was short-lived, written when confirmed details of what happened were scarce. The headline was replaced in just over a half-hour as AP continued to publish updates about the incident, the driver and the victim. The final version of the story, and its headline, made clear what had happened.