Posted on October 7, 2015 in Wednesday's Example of Media Bias 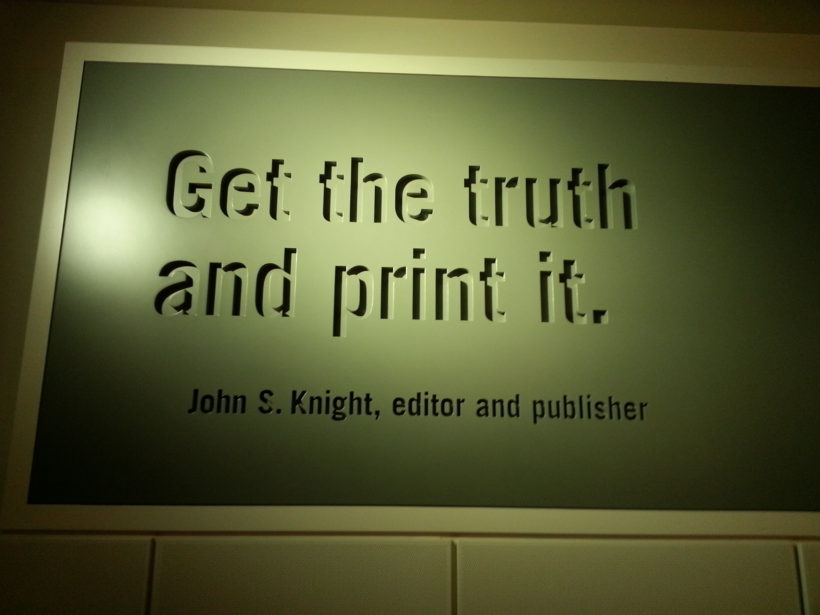 The Washington Post’s Chris Cillizza is troubled by a new Gallup poll finding:

Just four in 10 Americans say they have a ‘great deal’ or a ‘fair amount’ of trust in the media to report the news fairly and accurately.  That matches historic lows the media also ‘achieved’ in 2012 and 2014.

For this he blames “partisans – whether in politics or in the media – who have a vested interest in casting the press as hopelessly biased.”

“Whether you like or agree with an independent media all the time . . . you should value an entity that does its best to hold those in power accountable. Without such a force, you would like society a whole lot less. And our society would be a whole lot less.”

As a card-carrying media professional, your humble columnist naturally agrees with those pieties. But it’s not especially helpful to lecture mistrustful people that they should trust us. Trust has to be earned. And while Cillizza takes a pox-on-both-houses approach in deploring “partisans,” members of one party trust the media significantly more than other Americans do.

That would be the Democrats, 55% of whom answer the Gallup question in the affirmative — equaling the highest total figure recorded in the 19-year series, in 1999. For Republicans and independents, the proportions are 32% and 33%, respectively. Declining trust in the media is a secular trend, but greater trust among Democrats than non-Democrats is a constant.

How might members of the media act to build public trust? Here are two suggestions: First, don’t lie. Second, if somebody asks you to publish propaganda, don’t do it. …..

… Now for an example on our second bit of advice. In his Thursday statement about the Oregon shooting, the president famously said, “This is something we should politicize.” President Obama also said this:

The Post’s Erik Wemple wrote a mocking post titled “President Obama, National Assignment Editor.” He noted that Obama had made this comparison before, and “somehow, the media didn’t generate a whole bunch of graphs after that presidential comparison. . . . Guess they were waiting for a direct command!”

“Okay,” wrote Vox’s Zack Beauchamp in response to that command. To which the president, on Twitter, replied: “Thanks, Zack.”

We know what you’re thinking: Oh, that’s just Vox. But it isn’t:

“American Deaths in Terrorism vs. Gun Violence in One Graph.”

“Obama Is Right, Way More Americans Die in Gun Violence Than in Terrorism”

This is sheer propaganda — a meaningless factoid designed to further President Obama’s political agenda of opposing guns (and perhaps also of diminishing concerns about terrorism). The comparison is anything but apples-to-apples, for at least four reasons.

First, by custom terrorists who kill themselves in the course of attacking innocents are not counted as casualties of terrorism. But with the exception of Beauchamp, who uses nationwide gun homicide numbers, all of these writers count suicides—which inflates their “gun violence” numbers by roughly 200%.

Second, terrorism is a matter of national security, which means that it is primarily a federal responsibility. Most domestic crime comes under state and local jurisdiction. In case Vox readers are too dense to grasp it for themselves, Beauchamp explains: “The point Obama is making is clear: We spend huge amounts of money every year fighting terrorism, yet are unwilling, at the national level, to take even minor steps (like requiring background checks on all gun sales nationally) to stop gun violence.” A partial answer to this is: Well, yes—that’s how the federal system works.

Third, the comparison elides an obvious question: How many of the guns used in homicides are possessed in violation of already existing federal, state or local laws? Sen. Cory Booker, the New Jersey Democrat, tweeted the other day that when he was mayor of Newark, “almost all Nwks shootings were done by people obtaining guns illegally—we must clamp down on loopholes.” By definition if they were obtained illegally, they were not obtained through loopholes.

Fourth, law-abiding citizens with guns can also stop violence. (Even the most fanatical gun opponents generally do not favor disarming the police.) Aggregate homicide numbers take no account of that trade-off, which has no analogue in the field of terrorism. Anti-American terrorists are unambiguously villains; law-abiding gun owners do not deserve to be vilified, regardless of the merits of any case for more-restrictive policies.

…When reporting and news analysis become indistinguishable from the output of political operatives—and guns are not the only subject about which that can be said, only the most glaring—nobody should be surprised if those on the other side come to doubt the media’s honesty more generally.

The excerpt above is from an October 5 “Best of the Web” post by James Taranto at The Wall Street Journal.  What do you think of Mr. Taranto’s assertion about Americans’ perception of media bias?  Do he make a valid point? Explain your answer.